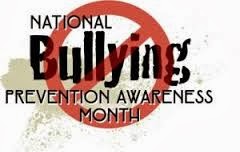 October is the national Bullying Prevention Awareness month, so I thought I'd weigh in with my experiences on this tough issue.

Not long ago, we were visiting family in a small town and made arrangements for my oldest son (11 at the time) to swim with their local team—because he loved swimming and didn't want to quit for the summer. Long story short- he lasted about a week due to bullying.

He kept his mouth shut for a few days, then finally told me about it. Of course I don't want anyone picking on my kid, but I also thought it was a great learning opportunity- since we'd never really been face-to-face with this issue. "If they won't leave you alone, focus on what you're supposed to be doing and ignore them," I said. "Don't put yourself in a bad position." "Tell the coach." What else could I really say?

The first swim meet came and all hell broke loose. I was officiating on deck and had no idea what battles my kid was facing—in a grassy field FULL OF PARENTS WHO DID NOTHING. It only came to a stop when my kid (hiding in his tent) pulled scissors from his backpack and threatened to use them if they didn't leave him alone. THAT got someone's attention. (I won't go into the things that DIDN'T get anyone's attention. Clearly, this still makes me angry.)

So, the meet was delayed and after the 'facts' were sorted, five kids were disqualified, including mine. That's not the part that bothers me—I've always told my kid that he has the right to defend himself and others, no matter what the consequences might be. Being disqualified is a far better consequence than what might have happened had he done nothing.

We had a meeting with the parents of the kids involved (their kids' ages ranging from 14-17) and none of the parents could believe their children would ever do such things, and at the time, it apparently looked like the kids were just playing. (How does throwing my son's tent out of the park's boundaries and into the forbidden rattlesnake zone look like playing?). Anyway, grrrrr, we all apologized, as did I—for what might have happened if they'd pushed my son an inch further, and we all agreed to tough it out on the hopes that everyone might learn something positive from this experience.

Did it work? No. The bullying was far worse with the kids seeming to want to teach my son a lesson for getting them in trouble. The coach never once saw my kid being held underwater at the wall, or the other swimmers timing their strokes and kicks to smack him upside the head as they swam by. And when my son asked the coach to switch lanes, she said no.

I have no advice for how our situation might have ended on a better note. The bullies won. We never went back and thank God we don't live there. We never have to interact with these people again.

With that said, my heart breaks for the kids who can't walk away. For those who go through this kind of torment day in and day out. I'm sure they've tried everything, but the bullies just get more clever.

I'm proud of my son, because he didn't learn that quitting is the answer when times get tough. He learned how it felt to be the new kid in a tight group of people. He learned how important it is to have a friend to stand with. And, while he's always been extremely outgoing, he goes out of his way to welcome every new kid walking through the door. :-)

There is lots of information going around the blogosphere right now—I've been soaking in the tips in case we're ever faced with bullying again.

And here's a great new publisher taking matters into their own hands with awesome daily posts on bullying and a $100 giveaway! http://cleanteenpublishing.blogspot.com/
Posted by Toni Kerr at 4:00 AM

Sounds like you're raising a fine young man. I am so sorry and sad about the bullying. The coach and the parents didn't see anything? Talk about selective vision.

Keep up the good parenting. I'm glad to hear your son is welcoming and accepting of newcomers.

Thank you for your post! This situation has happened with my daughter relentlessly to the point where we basically switched schools ( because teachers never "saw" anything but felt like my daughter was being too much of a know it all etc., and thus deserved to be bullied). Yes, stopping bullying is easier said than done but hopefully as others continue to share their stories, more people will take notice. Kids who are bullies often grow up into even meaner adults...

Thanks, Beth. I wouldn't have thought it was possible, since I myself tend to wear rose-colored glasses, but there it was. I'm glad we could leave before it got worse.

I'm so sorry for your daughter. I'm glad you could get her into a better school!

It's such a tough issue because you want your kids to be strong and stick up for themselves, but, to what end? Sigh.