The TimeKeepers by Jenn Bregman

I can't believe you asked that!!! CHEESE is my favorite food! I LOVE cheese. I would eat it all day -- every day! Favorite? Medium cheddar or really good lacy Swiss. Oh, no -- I have to run off and get some -- CHEESE!

kind, respectful treatment of all

In Bikram Yoga, it's the Eagle Pose. You really can feel it squeeze all the yuck out of your organs! But do I fly like an eagle after finishing the pose? Hardly.

I have always been a voracious (think T-Rex) kind of reader and always loved writing be it creative or legal briefs, but it wasn't until these characters started popping in my head that I just had to capture them. They literally woke me up at night! So I figured I better write down what they had to say if I ever wanted to sleep again. What remains amazing to me is that the characters completely drove the story. I would sit down at the computer every morning and have no idea what they were going to do or what mischief they were going to get in. It was a thriller that I got to participate in as the writer. And I was as surprised by the ending as anyone!

Still is The Firm. I love the others, but there's something about The Firm that just resonates off the hook with me.


6- Would you share a picture with us of your book out in nature? 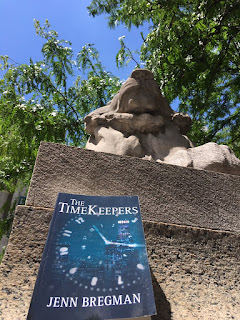 I have one goal which is both short and long term and that is to complete the next book in this trilogy and then write the last. I know how it ends. I have the last scene already tucked away. I see the whole arc of the story. I just hope I have the skill and talent to write it down as I see it!

I started to say that it was publishing The TimeKeepers which WAS scary, but thinking a bit more, it was the podcast I did with Daniel Ford for Writer's Bone. Although publishing your book and sending it out into the world for others to enjoy and/or judge is scary, doing a live interview (with no edits) and no idea what the questions might be was really scary. Turns it was also the most fun! I LOVED it! It was exciting talking to someone who loved writing as much as I did and who had so much to add. It was more of a conversation about writing than any kind of staid interview. Absolutely thrilling! Btw: Dan's debut novel Sid Sanford Lives! is publishing Sept. 18th and is available for pre-order right now on Amazon!


9- What emotions do you hope your book will evoke for the reader, and is there a particular scene you hope will resonate with readers?

I hope The TimeKeepers inspires readers to renew their quest for justice and basic fairness in the world. I hope readers will stop giving up and that their passion to fight for things that are right will enkindle. I hope they will see that fighting is not only right, that it's worthy, and that they can win. Particular scene is The Epilogue. I hope readers will really sit with this, let it seep into their bones. See, and feel, the message.

Just write! Anything! Sentences that don't make sense! Absolute garbage! AND THEN EDIT. Don't be critical of your first effort. It will stop you in your tracks. Just keep writing until you have some kind of a flow and then go back and edit. Try not to disturb the initial creative process. That is your divine inspiration. Let it roll. You can always go back, but can't always go forward.

11- Do you prefer to read ebooks or print books, and why?

I always swore by print books since I love to manhandle them, dog ear them, notate in them, even drop food in them. But then I got the new Kindle from Amazon and love it! It's easy and portable and feels good to use. So for certain books that need a bit of mangling, I would still buy paperback. For quick reads, I would use the Kindle.

12- The cover of The TimeKeepers appears to have Los Angeles behind a 12:25 clock face. Is that the setting and is there a significance to the time?

13- What is the most memorable trait or visual oddity of one of your characters?

Sam running his hand through his still jet black hair and scratching the back of his neck.

14- #DiversityBingo2017 What's your favorite book that covers a square on the card?

Ariel. She is Barbie doll but brilliant.

16- Can you think of any small change in the world you could make to potentially benefit hundreds of other authors or readers?

Bring back the bookmobiles! I haven't seen one in years and they can be such a wonderful way to bring books to people (especially kids!) who might not otherwise be able to access books. Plus, they always had a friendly and knowledgeable librarian at the helm who helped guide young, and also, older minds.

I take guidance from the bestseller lists and award winner lists but also from my friends. If a friend recommends a book, especially enthusiastically, I will take a look.

18- How will you measure your publishing performance? (Number of books sold, number of reviews, average rating, awards, fans, etc)

It is all those things. I am grateful to have received a fantastic review from Publishers Weekly and many other significant sources and readers. Ratings matter, friends on social media matter and book sales matter. All of these things are important to me. They all tell me that people are enjoying The TimeKeepers and that's all I could ever want.

I went with Triborough Publishing because I could get my book to market quickest that way. I was already writing the sequel and wanted to get the first one out so people could meet, and care about, the characters.

20- What is one discussion topic which you would like the readers of this interview to answer or remark on in the comments?

I would like to see what significance the strong female characters have to readers and whether readers enjoyed the underlying allegorical themes of charity and service that are woven into the story. 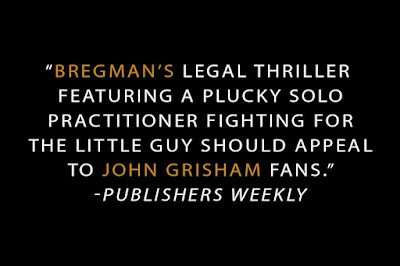 Attorney Sarah Brockman is young, idealistic, and naïve. Having left Big Law in search of work that would make a difference, she finds herself barely scraping by running her own personal injury law firm working for clients who can’t pay and pursuing causes she can’t win. Then a random horrific car crash shatters everything. Now she’s staring into the darkest shadows of the very system she’s dedicated her life to upholding, filled with corrupt judges, dirty cops and attorneys, offshore banking, massive fraud, and twists and turns through the highways and byways of Southern California, Mexico and the Cook Islands.
Facing off against a cunning and deranged adversary, Sarah is aided by a sharp-witted socialite, a felon and occasional crackhead, and a shameless Mexican raconteur. All while kindling a tender romance with Sam, her boyishly handsome new love, who has been following the same trail but from the other end—and the wrong side of the law.
Sarah feels invisible strings pulling her ever closer to the core of the conspiracy. But if she’s just a pawn in someone else’s game, are the strings being pulled for good or for bad? Or, even, both? And will she be on the side that wins?

Jenn Bregman is a white collar criminal defense lawyer who has practiced in both Los Angeles and New York, where she worked on some of the most notorious cases of our time. A graduate of the University of Denver and UCLA Law School, she was a member of Law Review while at UCLA and her article was published in the UCLA Law Review. She has also written for Los Angeles Lawyer magazine.
Having loved to write since nailing the alphabet in childhood, Jenn woke up one day and just started The TimeKeepers. The main characters had been simmering for a while, and when pen came to paper or, in this case, fingers to keyboard, the characters developed and evolved on their own.
Rather than adopt the literary norm of conceiving a plot and then constructing an outline for the story, Jenn let the characters drive the story. She never knew what they were going to do and would wake up each day in quiet anticipation to see what would happen next; what mischief they were going to get into or what path they would take.
That was the fun part, the editing came later…
When not writing, Jenn is an adventurer and explorer who loves to travel, ski, run marathons, scuba dive, and hike giant mountains, having summited 14,265 foot Quandary Peak in Colorado and “reverse summited” the Grand Canyon.
She loves her dashing husband, her, oh, so busy, five-year-old twin boys, family, friends, and dogs (especially pugs).
She enjoys music, especially Adele, Sia, the Pentatonix, and classical music, and remains a die-hard Broncos fan–which is definitely easier some years than others.
She is a member of the State Bar of California, California Women Lawyers, Women Lawyers Association of Los Angeles, Gamma Phi Beta, and Mensa.


The TimeKeepers
Posted by J Lenni Dorner at 12:00 AM