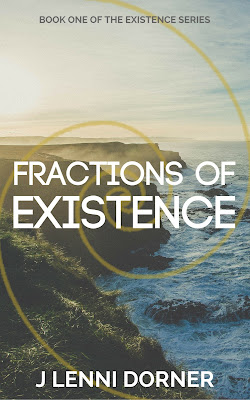 
If you read Operation Awesome regularly, then you're already familiar with J Lenni Dorner, blog contributor. Today, however, you get to meet J Lenni Dorner, debut fiction author! We are so excited for the release of J's first novel, FRACTIONS OF EXISTENCE. Congratulations, J. We hope it feels good to be on the other end of the interview questions. :0)

I once wrote using a twig dipped in blood.

Wow, that sounded creepy, didn’t it?

My bio-parents weren’t “grocery store” types. I grew up in a hunter-gatherer environment. We used every part of the animal. The first time someone asked me where I got deerskin pants, I looked at them like they were stupid. At that point in my young life, I had never met someone before who lived another way. Now when someone asks me something like that, I just laugh and shake my head. I’m just barely “civilized.”

Of the people you know, I’m the Daryl Dixon.

4- Would you share a picture with us of some of your rejected book covers? 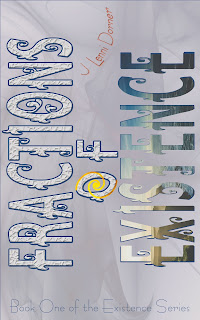 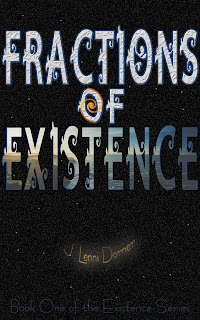 On a scale of 1 to 10, how terrible were those covers for an urban fantasy?


5- What are some of your short and long-term writing goals?

To get 50 reviews for this book.

To sell 90,000 copies of Fractions of Existence by September 2020.
To publish another fiction book by April 2018.
To write and publish the entire Existence book series. 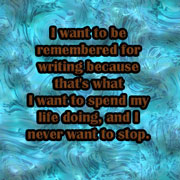 6- What emotions do you hope your book will evoke for the reader, and is there a particular scene you hope will resonate with readers?

Wend has some “Ugly Duckling” moments in this book. She has no idea what Xavier might see in her, and wonders if he calls her beautiful just to be polite. There’s a scene in a garage restroom where this feeling hits her. The truth is that Xavier sees who she really is, and that makes a real difference. Wend spends this book as a square peg trying to fit into a round hole, not that she’s aware of this reality. I think there are readers out there who have felt like outsiders in their own life until they discovered where they belonged. Sometimes you just have to find your people or your niche.

Sandi. She loves the characters. Heath is her favorite in this book. She's a friend and was the first editor of the manuscript.

8- What's with the "What-Are-They"? It's the name of your website and the title of the last chapter.

I've based these characters off of a legend an elder in my tribe taught me. There are a handful (with fingers to spare) of us who know this passed-down story. I created a video of words that may enter a reader's mind while reading this and trying to figure it out. In book two, the characters will have a discussion about the question.

Editing! It's interesting how finding the mistakes of others can make a switch go off in your mind. "Wait, did I do that too?"
The tool that made the biggest difference has been Grammarly. It's an extension in my Chrome browser, and an add-on in MS Word. I don't know how I lived without it. Grammarly doesn't just point out that something is wrong or might be wrong, it explains the reasoning behind it. For example, it pointed out that I was using the British version of a word. It also picked up on my using aloud instead of out loud. (Aloud is considered a more formal action. One reads a Bible aloud in church. This interview, however, you could read out loud to a friend.)

That would be the eyes. I highly suggest paying attention to Xavier, Heath, Jez, and Wend’s eyes. (Caleb and Jun have impressive eyes, too. But that doesn't come up in book one.)

I've always been intrigued that Dumbledore is protecting Harry on one hand, and shoving him, unprepared, into danger with the other hand (the one that wore the ring).
What? Ohhh... no one else has ever answered with a character that isn't their own. Sneaky sneaky!
My honest answer to this question is Heath. But, until book two, I can't even hint as to why, or which personality contradiction I'm talking about!

14- Can you think of any small change in the world you could make to potentially benefit hundreds of other authors or readers?

I'm doing it already. Interviewing debut authors makes a huge difference. The more authors, the more books. More books, better odds a reader will find one to love. More readers means less illiteracy, and that means a better world for everyone.

If it's by one of my favorite authors, that's the easiest sale. But I didn't realize my other motivations until I started the "Down the TBR Hole" blog prompt posts on my blog. It turns out that I'm most motivated to buy any books about the Lenni-Lenape, and any books that remind me of my book or my characters.

I am ALL about reviews. Those are the rings in my tree. Sure, some rings show years where the forest burned or insects attacked; but every ring is earned by a growing tree.

I self-published largely because I like having control. Urban Fantasy, all of Speculative Fiction, really, is hard to get agents interested in. Throw in that my book is lacking vampires, detectives, orphaned main characters, magic users, (and neither dragon nor shifter would be entirely accurate to describe Caleb)... and it's easy to see why agents replied, politely, by saying they didn't think they had the "right contacts" for my story. (And other similar rejections.)

I found a list with other clichés and tropes I avoided: renegade female loner, rebellious normal who “plays” with paranormals, and vigilantes/hunters/professional monster-fighters as the protagonists (mine are antagonists, and it's a religious sect…).

I considered throwing a disclaimer in the front of the book. "Warning: This Urban Fantasy isn't like the other ones."

18- What is one question which you would like the readers of this interview to answer or remark on in the comments?

I want to know what debut books you're looking forward to in the coming months!

Once they were humanity's exalted protectors— now they are being hunted.


Xavier will weigh all human life against Gwendolyn's ignorant happiness. The good news is that her choice can blow his away.

Omnipotent beings find each other while playing an online game. Xavier has been searching for Gwendolyn, his true mate and the missing member of the Existence. Only if reunited can the group regain the rest of their memories and access all of their powers. Hidden in plain sight, disguised as humans, they help who they can, as best they can, when they can.

The Eyes in the Shadows, a religious sect, has been trying to free humans from the “prison” of life on Earth for millenniums. The Existence has always been able to thwart them… until now. They've discovered a way to end the world that no one will see coming.

Gwendolyn has her future all laid out. There is a plan. She knows what her parents want for her and how to get it. Then Xavier, a friend from a virtual game, makes her question everything. He's full of secrets, one being an understanding of her fear of the wind.

She tries to suppress her intense attraction to the mysterious and frustrating Xavier. She's engaged, after all, and the thoughts she's having aren't proper. Gwendolyn is swept into a whirlwind of secrets, danger, and forbidden attraction. She'll drive across the country in her beat-up old car, not knowing if he's is genuinely interested or just being polite. (He refuses to kiss her!) Gwendolyn's journey is full of self-doubt, sacrifice, and dark visions that invade her sleep. Will she uncover the truth about herself?


J is the Operation Awesome Team member who (usually) runs the Debut Author Spotlight on Wednesdays. (Thanks, Kara!)
The author attended Penn State.
J has won several writing awards, some which included publication in anthologies.
Learn more on the website:
http://www.what-are-they.com/

Thanks for this, Kara. Putting me in my own hot seat has been an interesting experience!