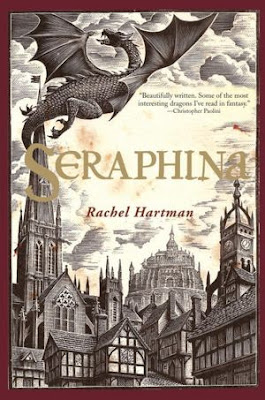 Four decades of peace have done little to ease the mistrust between humans and dragons in the kingdom of Goredd. Folding themselves into human shape, dragons attend court as ambassadors, and lend their rational, mathematical minds to universities as scholars and teachers. As the treaty's anniversary draws near, however, tensions are high.
Seraphina Dombegh has reason to fear both sides. An unusually gifted musician, she joins the court just as a member of the royal family is murdered—in suspiciously draconian fashion. Seraphina is drawn into the investigation, partnering with the captain of the Queen's Guard, the dangerously perceptive Prince Lucian Kiggs. While they begin to uncover hints of a sinister plot to destroy the peace, Seraphina struggles to protect her own secret, the secret behind her musical gift, one so terrible that its discovery could mean her very life.

In her exquisitely written fantasy debut, Rachel Hartman creates a rich, complex, and utterly original world. Seraphina's tortuous journey to self-acceptance is one readers will remember long after they've turned the final page.

Review: I'm a sucker for a vivid, compelling fantasy. Yes, dragons have been done before, both in literature and films. But Rachel Hartman's take is one I find refreshing and oh-so-awesome. For starters, her protagonist--the musically gifted Seraphina Dombegh--felt like a long lost friend. She's curious about the world around her, as well as her sort-of-concealed past. She's extremely self-conscious, but at the same time, confident. She has a big heart, always caring for her father and the grotesques (deformed creatures) who live in her forest. With her voice alone, I was happy, but Seraphina isn't a novel that satisfies itself with succeeding at one thing.
The world-building rules--especially those regarding dragons, or saarantrai--in Seraphina are several, but they're laid out logically and at a pace that feels comfortable. There is zero clunky writing here, folks. Hartman's prose is easy to digest, but powerful in its delivery--something I find uber-important in the fantasy genre, where description/setting up the world can sometimes overshadow character development and depth. Whether it's discussing the different saints the characters worship or the melodies Seraphina's instruments produce, nothing feels like it's there gratuitously. Hartman is adept at weaving in detail into a complex plot without bogging it down.
Another thing I loved? The supporting cast. I tend to fall for stories with a HUGE supporting cast (Harry Potter, anyone?). Hartman's novel is no exception. From Orma's to-the-point, no-nonsense attitude to Princess Glisselda's incessant enthusiasm, I was never, ever bored. And Kiggs. KIGGS. *fans self* Hartman managed to create a love interest that was as easy to root for as her protagonist. He's slightly more serious than Seraphina, but he shares her passion for books and philosophy, admires her bravery, and is enchanted by her musical talents. But don't fret: there is no Insta-Love in Seraphina. Just like the main plotline, the romance is a slow, slow burn, one you cannot turn away from. Trust me. When you reach the end, you'll be BEGGING for the sequel. #KiggsFTW
All in all, this is a fantasy novel for readers of all genres, but especially for those who love political intrigue, magic in unexpected places, and lots of (really sweet) romantic tension.
Make sure you pick up your copy of Seraphina on July 10th!!
Posted by Amparo Ortiz at 5:56 AM

Ooh, this book is going on my TBR list! Can't wait for July.

Just discovered your blog, and yes, it's AWESOME! But are you discontinuing the mystery agent contests? There don't seem to have been any recently.

Hi Jennifer! Welcome to OA :) We generally have a Mystery Agent contest every month on the first. We've been pleased to host Brianne Johnson and Sarah LaPolla so far this year (in Feb and March respectively) and our next one will be up on April 1st so stay tuned for details!

Ahhh just noticed our archives weren't up to date. But I've got it fixed now :D

Hello I'm a new follower and look forward to following your blog. :-)

Wow...this sounds wonderful! Thanks for telling us about it.