Thanks for stopping by to read our winner's entry! 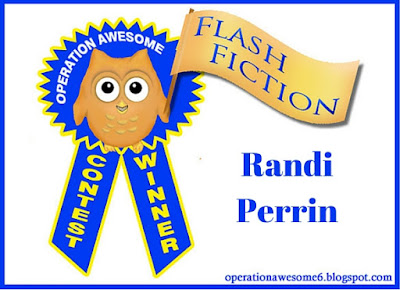 I hated when the sergeant addressed me like that. It had been five years, and two years in he started using my first name, so I thought that meant I fit in. Clearly I was mistaken.

I followed the sound of his voice through the condemned house that smelled of death and decay until I ended up in a room that was dimly lit by the setting sun. The sergeant was crouched down next to something that was covered by a paint-splattered drop cloth, which was odd considering the walls didn’t look like they’d ever been acquainted with a paint brush. Just like in the movies, he used his pen to push the cloth out of the way and the fresh stench of death knocked him back and he stumbled a few feet. I held my hand over my mouth to cover the laughter that I couldn’t swallow, but it also worked well to block the offensive scent that filled the room. The look he shot me warned that any word I uttered could be the last mistake I ever made.

He walked around the room, poking holes in the walls and moving dusty books that lined a rickety bookshelf. He shook his head and mumbled to himself.

Determined to be useful, I left the room, grateful to no longer look into the hollow eyes of the skull my boss unearthed.

A rustling sound from upstairs caught my attention, and my hand immediately went to my hip to draw my weapon. Hiding behind the 9mm, I made my way up the stairs, my heart thumping harder with each step I took.

I made my way through the rooms, but found nothing out of the ordinary. I returned downstairs to find the sergeant bent over the body, his hand over his nose and mouth. The look on his face told me not to speak, lest suffer his wrath, and that was the last damn thing I wanted to do.

Instead, I re-holstered my weapon, and paced the floor, my hand still on the piece—just in case.

The sergeant stood up and kicked the cloth back over the body. His shoulders were tense, and his brow was furrowed, and this was the last thing he wanted to deal with, I was sure.

There was that noise again. This time I could tell it was right above my head, and I pulled my gun out and fired straight up into the second floor.

The ceiling splintered, cracked, and fell in. The sergeant and I moved just in time to save ourselves from the dead rat that came tumbling down—followed by a mountain of white powder.

It looked like snow, but it was actually cocaine. A lot of cocaine.

The sergeant smiled. “You’re not so worthless after all, Danny. That’s what we were actually after.” He motioned to the rubble. “The homicide over there was just an added bonus.”

Thanks for stopping by! Come back on Monday to read about our Pass or Pages agents. The entry window will be open between Monday, March 14, and Wednesday, March 16, and anyone with a complete, polished manuscript in the YA Contemporary genre can enter. You can read more about it here.
Posted by Unknown at 9:30 PM