1- The nickname or abbreviation for your book is "TAOHOALG" -- How are you pronouncing that?

Haha, there is no good way to pronounce that! A book blogger started using it at the beginning of my blog tour, and then I started using it too. The Art of Holding On and Letting Go is a wonderful metaphor for the rock climbing and the emotional journey in my book, but it’s tiring to repeatedly say and type such a long title!

2- Living in Detroit, have you visited the Diego Rivera murals? If so, what impressions did you have from them?

Wow, you’re the first blogger to ask me specifically about Detroit. I’ve seen the Diego Rivera murals at the Detroit Institute of Arts on several occasions. They are huge and impressive and I sort of stood in awe the first time, trying to take it all in. With each visit, you notice new details. If you can’t visit the murals in person, the DIA has a guided tour online: http://www.dia.org/art/rivera-court.aspx

I was often sick as a child with severe asthma that wasn’t under control until my mid-teens. I had bronchitis and pneumonia every year, was hospitalized, and wasn’t able to play sports like soccer with my friends. I spent a lot of time at home reading, drawing, writing, and daydreaming. When I was healthy, I liked to explore the woods behind my house. My appreciation of nature began as a child, and I wrote stories in my head, imagining journeys and mysteries during these solo excursions.

In 2nd grade, I won a young authors contest for a poem I wrote, If I Could Fly. I got to read it at an assembly in front of the entire school and attend a regional conference where I met real authors. I was hooked. I wrote poems and short stories and journaled, but at some point during high school and college, I lost confidence in my writing. I needed to grow and experience more of the world. My social work career greatly expanded my worldview, and my confidence in my writing voice grew at the same time.

5- What emotions do you hope your book will evoke for the reader, and is there a particular scene you hope will resonate with readers?

I think my book covers a lot of emotional territory through universal themes, but most of all, I hope my book evokes empathy. I think it’s a very human story that most people can relate too, especially the concept of loss. Even if you haven’t yet experienced the death of a loved one, you’ve experienced other losses in your life – changing schools or jobs, changing friendships or romantic relationships, heath, divorce, moving to a new home.

6- Have you ever stayed/ dined at the Detroit Marriott at the Renaissance Center, the tallest all-hotel skyscraper in the Western Hemisphere?

Why yes I have, and I didn’t even realize it had this distinction! You’ve done your research! The restaurant at the top is now called the Coach Insignia Detroit, and I was there for a holiday dinner with my husband’s co-workers a couple years ago. But my very first time at the restaurant was as a teenager with my first boyfriend in high school. He wanted it to be a surprise, so wouldn’t tell me where we were going. I was way under-dressed and so uncomfortable feeling like I didn’t belong there. At that time, the restaurant was called the Summit and it revolved 360 degrees giving you a complete panoramic view of Detroit and Canada. People would place notes or cards on the window ledge at their seat, and then watch for their note to make it all the way back around by the time they finished dinner. And sometimes other people would sign or write messages on those notes, like Happy Birthday or Happy Anniversary. It was a fun idea!

7- Is there any diversity we can look forward to in your book?

Detroit and the surrounding suburbs are very diverse, but also very segregated. I wanted to accurately portray the real diversity in this area, but I’m white and that’s what I know, so my main character Cara is white. But her world is diverse, not just from the traveling she’s done, but the people she befriends when she moves to Detroit. Cara’s love interest, Tom, has a Mexican American father and a Jewish mother, and this has certainly shaped how he was raised and what’s important to him. Rock climbing in the U.S. seems to draw more white participants, but the climbing gym in my story is located in Pontiac, a struggling city with a large African American population. So, it made sense that there would be an African American boy at the climbing gym that Cara gets to know. Also, Cara’s beloved Uncle Max is gay. My own uncle is gay, and it was important for me to normalize this in my story – there’s no big coming-out scene, no huge drama around his sexual orientation; it’s simply who he is, and his family is very accepting of this.

8- Sites like neighborhood scout list Detroit as having a 1 in 50 chance of a citizen being a violent crime target. Given your background in social work, might you have any suggestions to improve the situation?

These statistics scare a lot of people, and entire books and research papers discuss the complicated history and solutions underway. Detroit is deeply entrenched in poverty, and dysfunctional government systems - including the schools - continue to be a barrier to progress. However, there’s currently a resurgence of economical growth with many new businesses and restaurants opening up. Some parts of the city are thriving and rapidly transforming, while other sections are left behind. The Skillman Foundation is one of the non-profits making a difference, providing financial support when systems fail, and providing leadership to empower residents to make the changes they need – from functioning street lights for safety to creation of new jobs to youth mentoring. You can learn more about what’s happening in Detroit here http://www.skillman.org/ , and there are other empowering programs such as Inside Out Literary Arts which help to give kids a voice through writing/poetry. Read/listen to some of the poems on their website and be inspired: http://insideoutdetroit.org/

9- As a reader, what most motivates you to buy a new book to read?

I knew that self-publishing wasn’t the right choice for me at this time. I really wanted to work closely with an editor and have the marketing benefits of a traditional press so my book could be in schools and libraries. When I saw the announcement for the Sheehan YA Book Prize from Elephant Rock Books last year, I almost ignored it. I was determined to be published by a large NY house, but then I realized how much this small press had accomplished. The last Sheehan winner, Carnival at Bray, was a Printz Honor book, a Kirkus book of the year, and a Morris Finalist. I knew this press was publishing quality books and they shared my vision. I’ve grown as a writer through the editing process, and they’ve nurtured my book through every stage. I’d do it all over again with my next book, but ERB only publishes YA novels through their Sheehan Prize, and they’ll be looking for their next winner in 2017.

11- Anything else you would care to share about your book and yourself?

I’m grateful that most of the major trade journals have reviewed my book, and I’ve gathered those quotes on my website: http://www.kristinbartleylenz.com/books.html
The early praise from the Sheehan YA Book Prize judges was so encouraging, and my favorite blurb later came from award-winning author Tim Wynne-Jones who said, “This is a richly layered story, visceral and thoughtful in equal parts.” It’s nerve-wracking to release a book out into the world, and this validation came at just the right time. 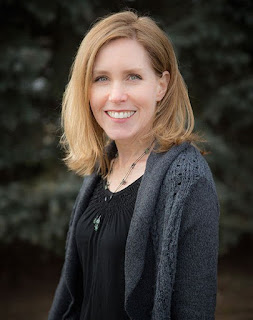 Readers- Have you seen any of the National Park Service brown signs with poetry? Check out Kristin's Facebook post about this!

Thanks so much for interviewing me and helping to spread the word about my book!