Ooh, that’s a tricky one! I’d have to say either Hello by Adele or Skyscraper by Demi Lovato.

When I was in fifth grade, my best friend of all time moved away to a different state. We were soul sisters—we’d been friends since kindergarten, she lived right behind me, and we both loved to sing. Needless to say, I was devastated. Wanting to do something that would show her how much her friendship meant to me, I decided to write a book. It was fiction, but it was based on our friendship, the characters modeled after us and people we knew. I wrote it out on paper, and then every day after school, I came home and typed it up on our old typewriter. Once it was finished, I had it bound and then gave it to her as a going away gift. I have no idea if she kept it or if it ended up in the garbage. We eventually lost contact. But the one thing that I realized was how much easier it was for me to convey my thoughts and feelings on paper, and how much I loved the art of storytelling. It was at that time that I decided I would one day become a writer.

3- Five boys! Any multi-births or do they all have their own birthdays?

Believe it or not, they all have their own birthday! Lol. No multiple births in this family!

Well, I’ve always loved to write, but when I was a young child, it was mostly poems and short stories. Life, of course, can be crazy, and raising five boys can be time-consuming, so writing really took a back burner for me. It wasn’t until I read the Twilight series by Stephenie Meyer that I felt this burning desire to create my own stories again. I guess I thought, “if she can do it with three boys, why can’t I?”

5- I see you did the smoothie challenge a few months ago. Do you often drink smoothies, and do you have a favorite?

I actually don’t drink a lot of smoothies, but I think my favorite would be a classic strawberry banana one. And by the way, the smoothie I was assigned to drink for the challenge was so disgusting! I can still taste it if I think hard enough! Yuck.

I do, actually! It was shortly after I announced on social media that I’d signed a contract with Clean Teen Publishing to publish Catalyst. A friend of mine, whom I hadn’t seen in years since they moved out of state, contacted me and said her twelve-year old daughter was so excited about my novel and wanted to do a school project about me. Turns out the project was about a modern-day hero! I was deeply surprised but so honored. She interviewed me, wrote a report, and then presented it to her class. And from what I hear, she got a good grade!
I think that’s the first time I realized the immense responsibility that comes with being a published author. We are examples to our young readers. They look up to us, even admire and respect us. Teens who read my work may be influenced by what I’ve written, whether good or bad. Something to consider.

7- Can you share a pic of your favorite scarf?

I sure can! I love the coral and beige colors in this scarf—perfect for spring. 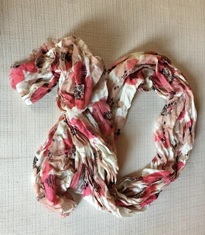 Wow, that’s a tough one. I’ve had readers message me that they read the book in a day because they couldn’t put it down. Then of course, there’s my mom who keeps buying copies for everyone else, but still doesn’t have a copy for herself. But I think my biggest fan would have to be the young girl I was telling you about who chose me as her hero. Her name is Anna. She sent me an email when she finished reading Catalyst and said she was telling all of her friends about it. Those words are music to an author’s ears!
I’m not sure what Anna loves most about the book, but I had another reader tell me they love the relationship between Sienna and Trey.

9- Do you have a favorite chocolate (or chocolate recipe)?

For favorite chocolate, it would have to be Lindt Lindor milk chocolate truffles or Reese’s Peanut Butter eggs/pumpkins/trees, etc. It has to be the specific holiday version of the PB cups, because those have the perfect ratio of peanut butter and chocolate. Trust me, it’s true!


10- What emotions do you hope your book will evoke for the reader, and is there a particular scene you hope will resonate with readers?

I’m hoping it will evoke excitement in readers, as in they don’t want to put it down so they keep reading late into the night. There is a particular scene that occurs on the Gateway (which is equivalent to the modern-day Strip in Las Vegas) that I hope will produce water works—I know it did for my editor when she was reading it for the first time!

Trey Winchester, the leader of the Fringe, has a tattoo of a tree on his arm, meant to represent power, wisdom, strength, and leadership. But this tattoo doesn’t sit on top of the skin like a normal tattoo, instead, it glows from beneath the skin. When Sienna meets him for the first time, she’s never seen anything like it.

12- The line in the book description: "young leader who’s too hot to be bad" -- I love that. Have you known anyone who fits that description?

Lol. We all love the bad boy, don’t we? No, I don’t think I’ve known anyone specifically who would fit that description. But I think the character of Trey is built in part by bits and pieces of guys I’ve known, but also from my complete imagination. He’s a rebel with a cause, and yes, he is hot!

13- Reading the blurb, it looks like you've created a whole new kind of diversity! Are there any certain currently-existing diversities you'd like to mention that we can look forward to in your book?

The book takes place in a futuristic society where the wealthy choose genetic modification for their children. So you have the wealthy, genetically modified teens, and then you have Sienna (the main character in the story) who is considered to be a “normal” girl because her parents decided to let nature decide the characteristics of their child (the reasons why they did this are forthcoming in this novel and the next). So yes, there is a bit of diversity there, and on Sienna’s end, there are feelings of not being good enough, especially compared to her peers.

I think there are several things actually. If someone recommends a book to me, then I’m all over it. Also, I’m active on Instagram and love interacting with other readers to see what they’re reading and what’s hot right now. I discovered Six of Crows this way! And lastly, but probably the most important, I’m a cover snob. Sometimes I’ll buy a book simply because of the cover and the back jacket blurb. Which goes to show that you CAN judge a book by its cover!

15- There's a lot of DIY crafty goodness on your Pinterest boards. Are you into crafting and do you have a pic of a project you're especially proud of making?

Ahh, yes, I LOVE Pinterest! I also love planning parties (when I can find the time) so most of my “creations” stem from that particular outlet. Here are a few pics of a couple parties I’m especially proud of.
Octonauts Birthday Party
Dr. Seuss Baby Shower

16- What was the deciding factor in your publication route? (Clean Teen Publishing)

I actually received three offers of publication, with Clean Teen being my top choice. I knew they were the right home for Catalyst because of their reputation, their savvy marketing skills, and their all-around awesomeness. And I haven’t been disappointed! They are an amazing group of women to work with, and it truly feels like I’m part of a family. The other authors are fabulous too, and I love the camaraderie and willingness to help each other promote. I feel like I won the lottery when Clean Teen offered me a contract to publish Catalyst! It has been the best experience.

Catalyst can be found in Barnes & Noble bookstores nationwide, coming in December, so I’m super excited about that! Look for it on a shelf near you!

Too pretty.
Too smart.
Too perfect.


In a crumbling, futuristic Las Vegas where the wealthy choose the characteristics of their children like ordering off a drive-thru menu, seventeen-year-old Sienna Preston doesn’t fit in. As a normal girl surrounded by genetically modified teens, all of her imperfections are on display. But after the death of her father, everything she's ever known and loved changes in an instant.

With little skills to help provide for her family, Sienna clings to the two things that come easily—lying and stealing. But not all thief-for-hire assignments go as planned. When a covert exchange of a stolen computer chip is intercepted, she becomes entangled with a corrupt government official who uses her thieving past as leverage, her mother as collateral, and the genetically modified poster boy she’s falling for as bait.

In order to rescue her mother, there may only be one option—joining forces with the Fringe, an extremist group, and their young leader who’s too hot to be bad. Problem is, these revolutionaries aren’t what they seem, and the secrets they’re hiding could be more dangerous than Sienna is prepared for. In the end, she must be willing to risk everything to save the one thing that matters most.

Catalyst is a thrilling adventure of danger, romance, intrigue, and deception. 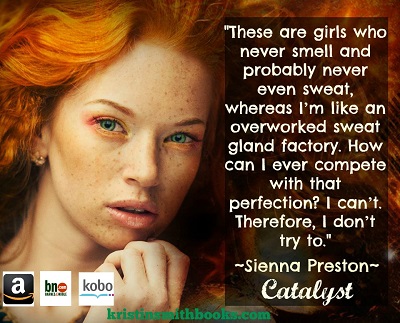 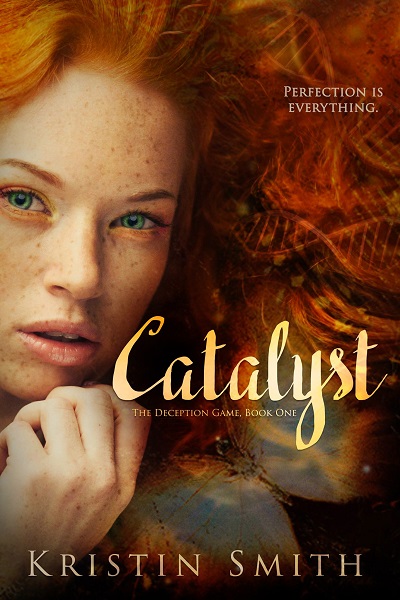 Author Bio:
Kristin Smith writes young adult contemporary and science fiction novels. When she’s not writing, you can find her dreaming about the beach, beating her boys at Just Dance, or belting out karaoke (from the comfort of her own home). Kristin currently resides in the middle-of-nowhere North Carolina with her husband and five incredibly loud but extremely cute boys. To read more about her obsession with YA novels or her addiction to chocolate, you can visit her at kristinsmithbooks.com. 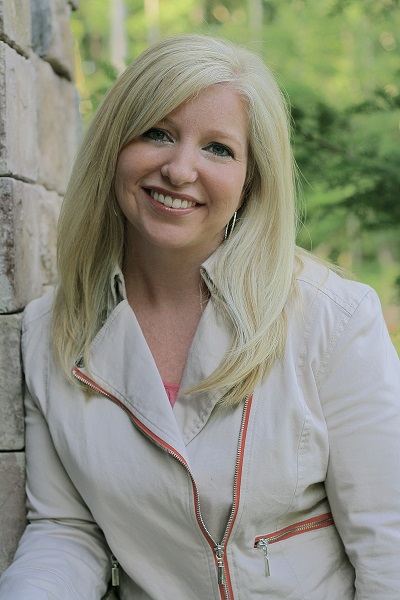 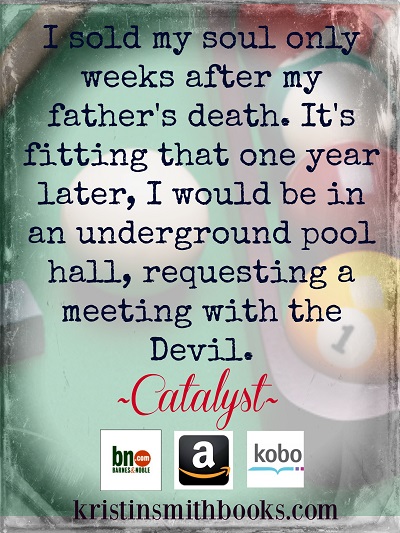