1- Have you done anything girly with your nails lately?

I do my nails weekly but haven’t done anything more than black polish the last few weeks. Not very exciting I’m afraid. I do, however, have a nail polish shelf, full of polishes every color of the rainbow. I constantly buy a gazillion gorgeous colors but tend to stick to the blacks, grays, blues, and turquoises.

2- What five words represent your most notable caracteristics or values?

I lived in Oklahoma in 2013, I worked in a local hospital. That year we had a week of devastating EF-4 & EF-5 tornadoes. Many of my friends & co-workers lost everything. One day while sitting at work I was chatting with a co-worker who was one who’d lost everything earlier that week in the tornados. She tried her best to see things with a humorous eye & was telling me about cleaning up her property & searching for possessions not destroyed. When she looked up from searching the ground she saw her bra, flying in the wind at the top of a tree across the street. We both laughed even though it was a painful laugh. Unbeknownst to us an elderly patient was listening in. When my co-worker went to bring her back for her appointment the adult son of the woman approached her & handed her a handful of cash & said ‘We heard you lost your home in the tornado. I’m sorry. My mom doesn’t have much but she’d like for you have this.’

Seriously, I had to walk away. Even just typing this stirs up my emotions. A woman who had nearly nothing herself wanted to give my friend the little bit of money she did have because she now had less than nearly everyone in the hospital. So heartwarming to know there are caring, decent people in the world who will help when someone needs it the most.

It’s really the ability to create a world where anything can happen. I’ve spent the last 10 years moving around the country following my husband's job and creating my own friends through writing is a fun break from real life.

5- What's the coolest vintage decor piece you have?

I’ve spent 20 years filling my house with really cool vintage pieces so choosing just one would be super hard. I have a whole shelf of vintage globes, loads of vintage barware, vintage books, and so much more. My house is pretty cool and very unique.

6- What are you reading and Netflixing this week?

I’m in between books this week as I’m working on my next manuscript and I try not to read while I write. This week I’ve been pretty irritated with the final 2 episodes of Pretty Little Liars. The series finale is next week and I have a sinking suspicion it will leave me as disappointed as most of the previous ‘big reveals’ and will still not fill all the plot holes needed to give viewers closure on the series. Apparently, that’s what happens when you mix bad writing with trend following. On Netflix I watch a few shows over and over, Friends, Raising Hope, Rules of Engagement, yadda, yadda, yadda.

Short term goals would be to have a fabulous release of Little Gray Dress on August 2nd. So far it’s gotten really great reviews from early readers so I’m excited to see where it goes.

Long term goals would be to continue to write and release books that do well with readers. (and maybe even sell the movie rights to a few!)

Wow. You know, I’ve been surprised by this one. I have a few real life friends who have really fallen in love with the book and it seriously warms my cold little heart. A few friends from High School have even been far more supportive and enthusiastic than I ever imagined. I haven’t seen some of them in 20 years so to have them love the book so much is a great feeling! Even some writers I admire have sent me really great reviews and feedback. I swear when I sent the book to author friends for endorsements, I didn’t sleep at all that night. I kept having nightmares of their responses telling me to ‘not quit my day job’ or ‘writing isn’t your thing’. LOL but it’s been quite the opposite thankfully.

I adore the 50’s. I feel like I should have lived out my young adulthood then as opposed to the 90s when I did. I don’t really have a favorite meme, per say, but I absolutely adore the 50’s ‘housewife expectations’ articles and books. It’s about as unrealistic as life gets. Let’s just say the phrase ‘submissive wife’ isn’t in my five words to describe me in question one. LOL

Fun, humor and an escape from real life. I want them to fall in love with my characters and close the book feeling like they’ve made new friends. (and maybe dying for a sequel or two)

To finally take the advice of writing without editing, even if it’s terrible. Just get the story on paper and fix it later. That was my saving grace of not having another failed almost complete manuscript. To basically get out of my own perfectionist, OCD filled head.

Main character Emi isn’t perfect, she’s got a potty mouth, a face that doesn’t match her words and she loves to eat. In one scene Emi devoured not one but two cheese filled omelets, despite the antagonist giving her crap about it. That’s real life. We say bad words, we eat the cake, quite possibly, the whole cake in one sitting while no one is watching.

Main Character with an under-represented body. Emi is 5’3” and a size 12. She’s not thin, and she’s definitely not a supermodel. Too many main characters are perfectly proportioned or aiming to be just that. Emi is not.

A great cover. Readers really do judge a book by its cover. Authors who have self-made amateur covers I always feel bad for. The cover must look professional and it needs to represent the story and genre inside.

15- How will you measure your publishing performance?

Sales, reviews, and ratings are great. Really though, I can’t wait to hear from readers. It’s all about them if you think about it. Without readers, how would I even be an author?

16- What was the deciding factor in your publication route?

You know, I dreamt of finding the perfect agent and having my book with a top five publisher. It didn’t happen like that. I got a lot of great feedback from agents but the time it takes to hear back from some of these people is absolutely insane. I’m almost 40 and I don’t particularly want to wait a year to hear yay or nay from an agent only to have my book sit for another year or ten while they try to sell it.

I ultimately decided to pitch small publishers and everyone gave such amazing feedback but I only got a couple offers. I chose the publisher that also published a few acquaintances books. I’m happy for now.

In the future who knows what I’ll do. I still seem to have that agent dream so we’ll see.

17- How do you define chicklit, and what do you most love about it?

Chick Lit is light-hearted, fun, funny and has a happy ending. So many people think chick lit is just a word used for books written for or about women. That’s not it. I also don’t believe chick lit is dead. I’ve been a chick lit book blogger for a couple years now and I can confidently say chick lit is FAR from dead. Has it changed? Yes. Just like the publishing industry changes. There is a market for it, without a doubt, you just have to know how to find it.

18- What questions would you like the readers of this interview to answer or remark on in the comments?

As a reader, how have you seen the publishing world change? And what is your advice on what you’ve noticed?

Thank you SO much for interviewing me and featuring Little Gray Dress. I loved answering your questions and can see that you put much thought into them.

I can’t wait to hear what your readers think of Little Gray Dress and look forward to chatting with them. 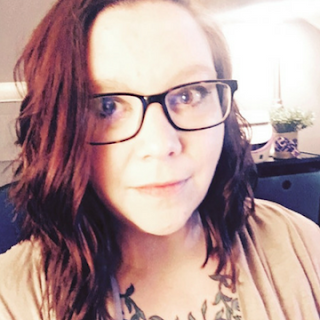 Aimee Brown is a writer and avid reader, often blogging her thoughts on chick lit books. Little Gray Dress is her first novel published. She’s currently studying for her Bachelor’s degree in English Writing. She spends much of her time writing her next book, doing homework, raising three teenagers, binge watching shows on Netflix and obsessively cleaning and redecorating her house. She’s fluent in sarcasm and has been known to use far too many swear words.

Aimee grew up in Oregon but is now a transplant living in cold Montana with her husband of twenty years, three teenage children, and far too many pets.

Emi Harrison has avoided her ex-fiance, Jack Cabot, for nearly two years. Her twin brother Evan’s wedding is about to end that streak.

From bad bridesmaid’s dresses, a hyperactive sister-in-law, a mean girl with even meaner secrets, and too much to drink, nothing seems to go right for Emi, except when she’s wearing her little gray dress.

When she speed-walks into Liam Jaxon’s bar, things get more complicated. He’s gorgeous, southern, and has no past with Emi. He may be exactly what she needs to prove for the last time that she doesn’t need or want Jack!

Her favorite little gray dress has made an appearance at nearly every major event in Emi’s adult life. Will it make another grand appearance when she least expects it? 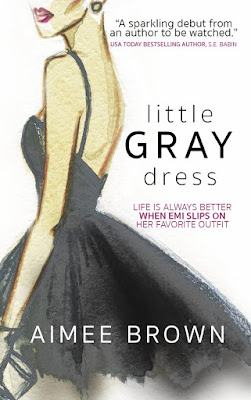 Little Gray Dress
Posted by J Lenni Dorner at 12:00 AM