Here's an interview that has been on the books since September 2016! Gloria Chao and I both competed in WRiTE CLUB 2016 (as Chun-Li and JavaInMe, respectively). We didn't face off against each other though.

1- Would you recommend WRiTE CLUB to other new authors, and would you care to give a shoutout to our pal DL Hammons?

I highly recommend WRiTE CLUB to new authors! DL Hammons is one of the kindest writers out there, and the format of his contest is brilliant. I love the anonymity, the ability to share longer passages, and the valuable feedback from the community.

I found my passion for writing in my mid-twenties, having focused on math and science for the time before that. When I was unhappy in dental school, reading young adult fiction was my favorite escape, and under my husband’s urgings, I started writing, quickly falling in love with it. Five years later, I’ve grown to love it even more each day.

3- Rumor is that you've turned the brass rat. What was MIT like?

MIT was one of the most supportive, fun, and nurturing communities I’ve ever experienced. Everyone values knowledge and the advancement of society, and they balance hard work with fun! When I hear “MIT,” I think of liquid nitrogen ice cream, chair surfing in underground tunnels, and playing pranks—which I’m sure is different than the reputation we have among the rest of the world. Because of this, I worked hard to capture the MIT experience in AMERICAN PANDA.

4- What are some of your short and long term writing goals?

Short term: Finish book 2, MISALIGNED, which will be released fall 2019 Long term: Continue writing and improving my craft. Eventually, I’d like to explore different genres and subject matters, though I have a feeling my next few books will center around Taiwanese-American characters struggling with their identity. I still have a lot to explore!

5- What is your favorite book (by someone else), and what do you love most about that book?

It’s hard to pick just one favorite, but I am a huge fan of Kerri Maniscalco’s STALKING JACK THE RIPPER series. The main character, Audrey Rose, is a girl ahead of her time, wanting an education and career when that wasn’t the norm for females. She fought arranged marriages, snuck out behind her father’s back, has a passion for science, and is badass enough to go after a murderer. Yet, she still loves pretty dresses and gossiping. I admire her intelligence, confidence, and all-around badassness. And the books are page-turners. So much suspense yet gorgeously written—I highly recommend!

6- Is that cadaver dissection scene (WRiTE CLUB playoff round 2) in the book?

Yes, the cadaver scene from WRiTE CLUB is in the book! It’s gone through revisions, but the bulk of it can be found in chapter 15. My other 2 WRiTE CLUB excerpts are also in the final version of the book!

My husband is probably my biggest fan (he’s read every version of my book) and he was the one who encouraged me to first start writing, then pursue it as a career. He definitely ships Mei and Darren’s relationship, but his favorite part of the book is the honest portrayal of a Taiwanese American family, which he has had plenty of experience with. For our first six years together, he saw my parents every Saturday.

I’ve also been lucky to have heard from readers who have connected with Mei’s story (and Darren), and I have also received several starred trade reviews.

I hope the book will 1) make readers laugh, 2) help them see either a mirror of their own experience or a window into another culture, and 3) feel empathy for both Mei and her parents. I really hope chapter 26, when Mei and her mother talk openly with each other for the first time, particularly resonates with readers. This conversation was based on real conversations I had with my mother while writing this book, and while it was the most difficult chapter to write, it was also the most rewarding.

Reading (a lot!!) across genres and age categories. Craft books help as well, but by far my best writing education came from studying other books.

10- How do you feel about papaya smoothies?

I actually love papaya smoothies even though I despise the history behind it. Because of a village in China that eats a lot of papaya and churns out big-breasted women, my mom, just like Mei’s mom, pushed me to eat papaya to make my breasts grow. After drinking papaya smoothies for a while, they really grew on me, though I never believed in their magical properties.

Unique Visual Trait: Mei has a mole on her forehead that her mother’s friends are constantly saying how she was so unlucky to have just missed out on it being in the center. After the hundredth friend touched it without permission, she took matters and the scissors into her own hands and gave herself bangs to hide the mole. Memorable habit: Mei’s mother clucking her tongue to show her disapproval (and sometimes accompanying it with an air slap).

12- https://diversebooks.org #WeNeedDiverseBooks recognizes all diverse experiences, including (but not limited to) LGBTQIA, Native, people of color, gender diversity, people with disabilities, and ethnic, cultural, and religious minorities. In what ways are the main characters in your book diverse?

My main character and her family are Taiwanese and her love interest is Japanese American.

Mei is intelligent and perceptive but because of her sheltered upbringing, she is socially awkward and naive, having experienced much less of the world than her peers.

14- Can you please tell us more about the American Panda cartoon? 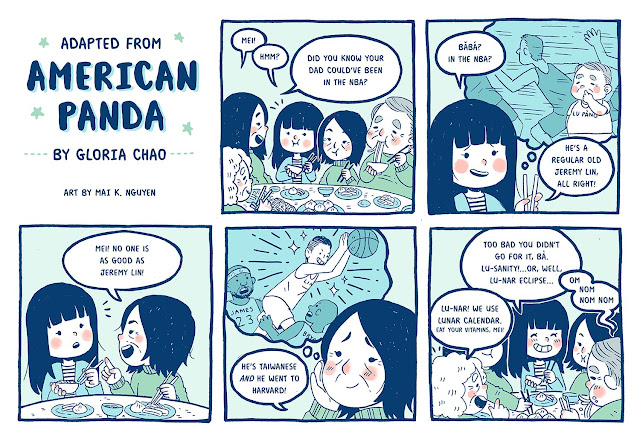 I read widely across genres and age categories, but I tend to be drawn to books that explore experiences that differ from my own, and realistic fiction is my main love. I like to read the first few pages, and usually I’ll know then which ones I have to buy immediately!

My goal when I wrote this book was to be able to reach at least one reader who struggled with the cultural gap the way I did, and I have already heard from many readers of all ages and races who had similar experiences. In that way, I feel I have already achieved my dream, and I am focusing on writing my second book, which will be released fall 2019.

Because I did not have capital to invest in self-publishing and my own marketing, I pursued the traditional publication route. 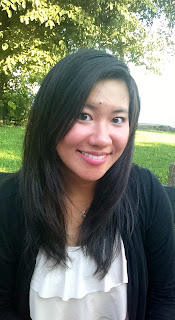 I haven’t looked at any data and I’m not sure what has been successful in terms of sales, but one thing I’ve learned about book marketing in this journey so far is that you should pick promotion strategies that you’re excited about, with sales being only a small part of the equation. You also shouldn’t feel like you have to do what everyone else is doing, and in fact, choosing unique strategies that only fit your book can help you stand out. For example, I commissioned a cartoon adapted from one of the AMERICAN PANDA scenes since the humor in my book lent itself to be captured as a comic strip. I did this more for myself because it was something I wanted to have, and it was worth the cost to me even if it doesn’t sell any books.

19- What is one question (or discussion topic) which you would like the readers of this interview to answer or remark on in the comments?

What is something that you think only your family does? For example, I am pretty sure my family is unique in ordering so much food at restaurants we need at least one extra table to be brought over (yes, it’s as embarrassing as it sounds). 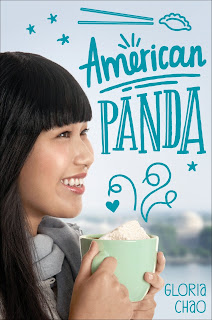 Gloria Chao currently lives in Chicago with her ever-supportive husband, for whom she became a nine-hole golfer (sometimes seven). She is always up for cooperative board games, Dance Dance Revolution, or soup dumplings. American Panda is her debut novel, and Misaligned is forthcoming fall 2019.


American Panda
Posted by J Lenni Dorner at 12:00 AM