1- Have you any New Year's Resolutions you can share with us?

Well I recently cancelled my gym membership so we can exclude the most obvious choice. My resolution would be to take at least a minute once a day to slow down and live more fully in the present moment and soak up the world around me. It’s so easy to get wrapped up in living a busy life and forget to appreciate life and the world around me as I bounce from task to task.

My imagination tends to run in overdrive all the time, so I’ve never had a shortage of ideas to write about. What I lacked was the focus to dedicate myself to one idea full time. When I started to struggle with anxiety and depression after some difficult life events collided, my imagination became a curse. It would take a simple thought and turn it into something catastrophic. To battle this anxiety I started to write about it and developed that writing into a story about a psychiatrist trying to help others as she struggled under the weight of her own mental illness. When the writing helped me improve my mental health, the story changed with it, morphing from something deeply introspective, but without a well constructed plot to a significantly tauter thriller as I realized there was a more exciting book buried within all the words I had written.

4- Would you share a picture with us of your book in an interesting setting? 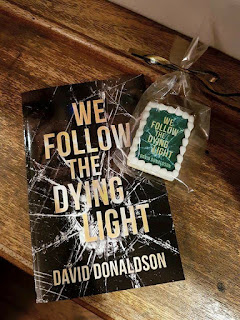 In this photo, my book is next to a cookie a local baker made for me with the cover on top. I gave these out to anyone who asked a question during the Q&A at my book launch. They were a big hit and the Q&A ended up being the best part of the event.

In the short run I want to do a book tour for We Follow the Dying Light, continue to produce flash fiction for my blog at http://www.daviddonaldson.ca , and finish the sequel. I’m over 43K words towards finishing a first draft. Because I don’t write full time, I have to be realistic with myself in terms of how quickly I can do all of this while maintaining a day job.

6- What is your favorite book (by someone else), and what do you love most about that book?

No Country for Old Men by Cormac McCarthy. McCarthy’s writing is incredibly poetic. He picks words out of the air and strings them together in these magical ways. Yet, in No Country for Old Men, it’s embedded in this great suspenseful crime story about a man on the run that keeps you turning the pages. That is no small feat in my opinion.

My readers are only just starting to provide their feedback as my book only came out in November and the book launch was held December 12th. But I actually had a cousin who works for an airline come to my launch while she was in Toronto on a layover between India and France. And she doesn’t even live in Toronto. If that’s not a super fan, I don’t know what is.

Great question! Dialogue is often how a character’s emotions and motivations are revealed in a story, as they interact with other characters. A character that is mute doesn’t have that ability, so you need to work harder to write down actions, facial expressions, and other features that elicit the same information for the reader.

The journey I take the protagonist through is not only a suspenseful ride through a broken man’s traumatic memories, it’s a walk through someone’s struggles with immense guilt. I hope the readers feel dread, fear and sadness as they explore what haunts the characters, but also feel an optimism about the future and one’s ability to stand up to their past and find closure.

10- In short, what is the Vancouver opioid crisis?

In Canada, Vancouver is the epicenter of Fentanyl related overdoses and deaths. The East Hastings region of the city in particular is known for its problems with poverty and drug addiction, and when Fentanyl started to surface, it was this area that was hit hardest. When I started the novel I read about the staggering number of overdose deaths and the way it was overwhelming the city’s capacity to deal with the issue. If the technology Dr. Chambers uses really did exist, I envisioned Vancouver being a city where they would try anything to get ahead of a problem that isn’t slowing down.

Working with an editor was a huge help. I had plenty of experience writing with my day job so being concise and knowing how to pull various ideas together was not an issue. But knowing how to structure a piece of fiction, what parts you need to include, what parts don’t contribute to the plot…all these elements is where the fact I was a first-time author shined through. But my editor had so much valuable feedback to provide and I’m immensely grateful for the work she did on the book. Now that I’m working on the sequel, these new skills are making the process far more productive than my first novel.

The antagonist has a pair of pale blue eyes that look like ice on a frozen lake. His eyes seem vacant, cold, dead, and they fill the protagonist with an immense dread every time she catches his gaze.

MC with an invisible disability MC with chronic pain

My protagonist for sure. She maintains a strong sense of duty towards her patients and pours all of her energy and resources into seeing them get well, but by the same token, she convinces herself her lies, theft and manipulation of others is a justifiable means to this end.

15- Can you think of any small change in the world you could make to benefit hundreds of other authors or readers potentially?

My book touches upon different aspects of mental illness, including PTSD, anxiety, depression, addiction and suicide. If the book or anything else I have to say on mental health can remove the stigma surrounding it, that would be a small change with big ramifications. Just like we can become physically ill, we can become mentally ill, and there’s no reason we should judge one differently than the other. #sicknotweak

The back-cover blurb is what will typically seal the deal. If it gives away most of the plot I will put the book back on the shelf. That’s like a movie trailer that gives away all the best scenes. Conversely, a two line blurb from an author I’m not familiar with isn’t enough to make me a buyer. I spent more time writing and re-writing my back-cover blurb for these reasons. And I’m still not convinced I nailed it.

I have no illusions about winning any writing awards and never set out to write the next great piece of literary fiction. I think I still have a long way to go as a writer before I can stand in that kind of company. Obviously selling a boatload of books is a good barometer of success, but more importantly would be strong reviews from influential critics in literature as well as important people in topical fields which my book touches upon.

We Follow the Dying Light is self-published. A few pieces of information came together to convince me to go this route. 1) Tellwell Talent, a Canadian company, had a service offering that took all the work out of the areas of self-publishing I knew nothing about. Their pricing structure meant they didn’t take any royalties, given they also didn’t take any of the risk in writing and investing in the book. 2) The statistical probability of landing a deal as a first-time author with a traditional publisher are very low, and if you do win a deal, it could still take years before your book sees the light of day. 3) Small presses don’t have significant marketing budgets, leaving most of that work on the author. Given this is what I would consider the most valuable part of having a publisher (since you can outsource editing and cover design yourself) it didn’t make sense to me to give up a large percentage of royalties and still have to do all that work.

The best strategy will depend on your book and its target audience. Social media is an inexpensive method to get a massive global reach. On the flip side though, you’re competing with a lot of eyeballs and attention spans spread across a lot of other marketers doing the same. If your novel deals with topical issues, then you have a much better chance of landing an interview with mainstream media as part of their coverage. That’s the route I’ll be taking in the new year. As powerful as social media is becoming, I still think people are more likely to make a purchase decision hearing about an author on mainstream media than they are through social media. It helps establish an extra trust factor.

20- What is one question or discussion topic which you would like the readers of this interview to answer or remark on in the comments?

I would be interested to hear about how reading and/or writing fiction helped other readers and authors deal with PTSD, anxiety and depression and what books were particularly important to them in this regard.

I can be found on: 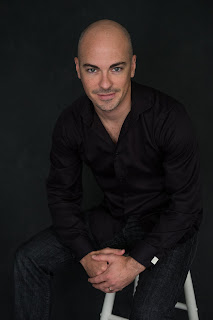 One of my favorite excerpts from the novel is below:

A thick cord stretched into the darkness at the edge of the lattice. I pulled myself along its length. The lattice grew dark as I wandered into a nebulous, suppressed place. Gavin's trauma loomed immense before me: a black orb of epic proportions haloed in a ring of light. Its watery surface undulated, as if bodies were struggling to breach the memory for a breath of air. Long tendrils emanated in all directions, stretching for miles to wrap around the healthier parts of Gavin's mind.

A chill ran up my body as I tried to mentally prepare myself for entry. To enter is to breach the event horizon, to say goodbye to Catarina as she is, for I never exit quite the same. A piece of me is left inside the memory, a piece of my patient comes out.

I placed my hand against the orb in front of me and my acusensory suit grew hot as the edges of the memory opened. The lattice let out a low, rhythmic pulse. Negative energy rippled out of the trauma as the gates of Gavin's hell opened.

We Follow the Dying Light
Posted by J Lenni Dorner at 12:00 AM