Hello, hello, all you fabulous Operation Awesome readers! My name is Karis, and I’m the latest addition to the OA blogging fam! I am so happy to be here, and so, so excited to get to know a brand-new community of writers and readers on the Internet! 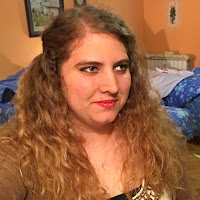 If you’re wondering, here’s a little about me: I’m a 20-something American/Canadian writer who was born in South Carolina, raised in Italy, schooled in Germany, Kentucky and New York City, and is currently back in the sunny (and unbearably hot) American South.

I feel like there was a lot in that sentence! Ha. Let’s break it down: first and foremost, I’m a writer. I’ve been writing since I had my first disappointment in a book’s ending and decided I, a seven-year-old, could do better. I feel like I’ve known pretty much from then that my goal and desire was to be a published, career writer.

These days, I work as a blogger (my personal blog is at www.karisrogerson.com) and freelance writer for various websites around the web — I’ve written for Seventeen.com, Bustle, Ravishly, and then bookish sites like LitReactor.com and YA Interrobang. My main topics of concern are mental health (I was diagnosed with depression years back and have since been very open about its ups and downs); young adult novels; and relationships...okay, fine, it’s mostly just recountings of the failed dates I’ve been on, but still! It’s very funny ;)

I’m also a novelist. I write young adult contemporary fiction, and I’m working on a massive revision and then will fling myself into the query trenches, wholeheartedly. YA novels are my deepest passion, and I aspire to be writing them for many years to come. I just...teenagers are the future, they’re bright and vibrant and hilarious, and also YA is just so much less cynical than adult fiction.

When I was four years old, my parents moved the family to Perugia, Italy, so they could work with evangelical churches there. We bounced around a bit and finally settled in Trieste, this little port town on the Adriatic that has got some of the best views, architecture, and weird culture around. This city has my heart. It’s also mildly famous for being the city where James Joyce began writing Ulysses…#NoBigDeal.

Because the Italian school system is so different from the American one, I attended an American boarding school in Germany for the last three years of high school. That was...man. So many stories! I lived in a dorm with 12 other teenage girls, and when I say there were shenanigans galore, I mean...come on, you stick 13 girls between the ages of 13-18 in one creaky house in the wilds of the Black Forest, what do you expect? We had fabulous times.

After four years of college in Kentucky, I moved to New York City to pursue a graduate program at NYU. I never finished that program, for financial and medical reasons. That’s a huge bummer, but one I’m working through my throwing myself fully into my novels and personal essays.

As for my role here, I’m going to be blogging about the writing journey, especially as it pertains to the query trenches; I’ve also set a goal of 100 rejections for 2018, so will do a regular update on that: what’s been rejected, what’s been accepted, and how many pints of ice cream I’ve devoured in the meantime ;)

If you’d like to connect with me on the Internet, your best bet is Twitter, where I’m @KarisRogerson, or Instagram, where I'm @karisselizabeth. Come say hi and let’s be buds!

A few quick fun facts about me include: I am obsessed with New York City and will claw my way back to that city eventually, and settle down so firmly they’ll bury me there. I broke my nose five days before my high school graduation, so I did graduate with a cast on my face, and I do still have a scar from that (on my knee). I speak 2.5 languages. Trampolines scare me so much I haven’t been on one in years. My middle name is Gertrude. I worked at the Sochi Olympics and met Al Roker. I have been to 23 countries (almost one country per year of life!). I’m deathly afraid of flying. Relatedly, I’ve been on something like 100 flights in my life.


Alright, so here’s the thing: all of those facts are true, except for one. It’s like a really extended version of “Two Truths and a Lie.” So leave a comment guessing at which factoid is false, and then tell me the weirdest thing about yourself!
Posted by Karis Rogerson at 6:00 AM

Hi Karis! I'm going to guess that your middle name is not Gertrude. Just a hunch.

One of the weirdest things about me is I'm a near-lifelong vegetarian, and I HATE bean sprouts! The most stereotypical vegetarian food, and I can't deal with them.

I agree. I think her middle name is probably Elizabeth.
I am a weird person.
I'm also a vegetarian. I eat nuts and bean products, but I cannot stand soy or almond milk.

hahah you are both correct! My middle name is Elizabeth (I guess having the Instagram handle there is a giveaway, huh?)