For a few months this year, I worked as a technical writer at a software company. I did things like write update notes and make decisions about what a particular button was going to say. When I first started there, though, I felt SO MUCH impostor syndrome. I had this nagging feeling that I'd somehow conned my way into this job - through three hiring exams, a phone interview, and an in-person interview - and that any second it would all come crashing down around me as it was revealed that I was, in fact, a giant fraud.

I'm easily stressed out, in case you can't tell. Hooray for CBD.

However, the higher-ups in my department had dealt with this sort of thing before. Tucked away on our server was a PowerPoint titled "Dealing with Impostor Syndrome." So of course, I downloaded it. (If nothing else, I can admit when I need help.) It was only four slides long, and three of them were company-specific, but there was one so helpful that I put it on a sticky note on my computer: "Write a solid first draft, get feedback." 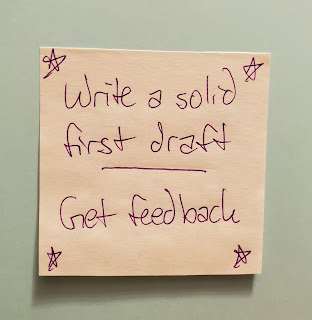 Photo: sticky note with "Write a solid first draft, get feedback" on it.
This now lives in my writing notebook.

When I first saw this, I thought, ugh, OBVIOUSLY that's how writing works, thanks for the hot take. But I hadn't really internalized this fact or made an effort to understand it. I had been given a simple update note to write, and I kept finding myself staring blankly at a blinking cursor. I realized that I was putting off even starting because I was so caught up in the shining idea of this beautiful final version that would go out to customers. It took a lot of effort to refocus from what I knew I needed to produce to the simple fact that I needed to produce something and start somewhere. I wouldn't know if I was on the right track unless I wrote something and got some feedback on it.

So, I wrote something basic. I simply looked at the facts of what was different and what the customer needed to know, and got that down. Then, once I had some real content to work with, it was so much easier to make some simple revisions and duck into the office next door to get my coworker's take on what I'd written. When I got my first draft to my mentor, he was really impressed. He said most new people spent way too much time on their first draft by trying to make it a final draft right off the bat, but I was in a good position because I hadn't sunk too much time into it or made it too technical. I wish I could tell you I won employee of the month or something, but nah. I got some nice self-satisfaction, though.

So what should you take away from this week's anecdote? Well, when it comes to your writing - and to things like NaNoWriMo, for instance - something is better than nothing. You're never going to finish if you don't even start. You don't have to get it perfect on the first try, because that's what CPs and betas and revisions are there for. Instead, just write a solid first draft, and then get feedback.
Posted by Amren Ortega at 12:00 AM