Hearts, Strings, and Other Breakable Things by Jacqueline Firkins
Goodreads


1- Would you please tell us more about the "fully twirl-able" book inspired dresses on your Instagram feed? 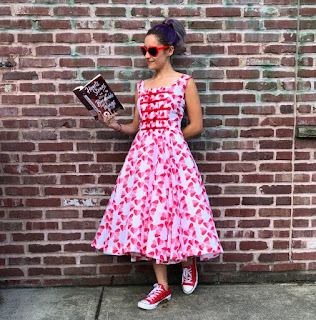 I have a distinct tremor and I’m therefore a terrible photographer. This makes IG a challenging platform for me. When I was thinking about what I could post there, I reminded myself that as a costume designer, I’m a visual artist. I should use that to my advantage on a visual platform. So I set about creating costumes—or in this case book themed dresses—that would echo the feel of the book I was releasing while employing my primary skill set. I also love building party dresses and sending them off to events, making someone feel joyous or beautiful during a memorable moment. I’ll be giving away the dresses over the next few months, hoping they help a few girls feel the way my main character does when she puts on her dream dress.

Accept feedback. Be willing to listen to how your words read. Then find a way to balance that feedback with your own inner voice. Easier said than done.

I’ve always been a storyteller, but in my career as a costume designer, I tell stories visually rather than verbally. There’s nothing I love better than developing worlds and characters, especially if I can do so with a group of collaborators. About 10 years ago I developed Essential Tremor. My motor skills decreased and I came to grips with the reality that drawing and doing detailed sewing work wouldn’t always be possible. I considered how else I might use my skills, training, and passion. Rather than take a script and extract the characters within, I began developing my own characters. Pretty soon the hours spent over a sewing machine shifted into hours with a laptop as my brain burst with ideas begging to hit the page.

4- What about Mansfield, Massachusetts, inspired you to use it as a setting?

I knew I wanted a New England setting. I went to grad school in Connecticut and I’ve worked in most of the surrounding states, so I had some familiarity with the area. There’s a sense of history and formality that worked well for paralleling Austen’s world. The name nailed it, and the size of the city is right for the scale of the story. That said, with all due apologies to any locals, I invented a lot that doesn’t exist in the real Mansfield, creating a hybrid of the real town and the settings that served the story.

I’m @jfkillsdarlings. I’ve connected with so many fabulous debut writers this year, but three who are consistently supportive, caring, and fun, brightening the Twitterverse are: @KT_Gabriel, @HastingSamantha, @LauraTNamey

6- Would you share a picture with us of your book with a dress? 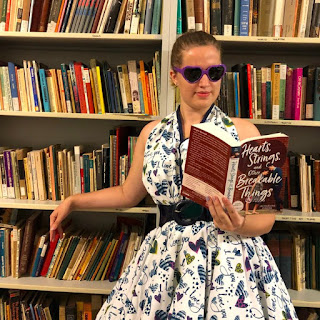 7- If someone hasn't read Jane Austen, which book of hers would you suggest the person should read first?

I love them all. The only one I wouldn’t start with is Northanger Abbey because it’s less representative of her tone than the others. Emma and P&P have the feistier heroines. Persuasion and Mansfield Park have the quieter ones. S&S has one of each.

This year I’ve been reading almost entirely debut novels in YA and MG. It’s been a great way to get to know my new community. Most of the time I either read books by people I know or that are recommended by people I know.

I’m a classics geek, but for living authors nothing’s stuck with me quite like:
Author name:Philip Pullman @PhilipPullman
Title: His Dark Materials series
Love because: They’re intensely creative worlds, and they take us on a deep dive into society, religion, class, gender, ecology, and politics all within a spectacularly entertaining adventure saga.

I often consider my closest friends my family, and I have an “honorary auntie” (she signs her emails HA) in the Vancouver area. She’s an avid reader of all genres and a brilliant writer as well. She was the first to read my messy early draft of Hearts, Strings and she’s supported me through every revision, cheering me on when my self doubt threatened to topple the enterprise altogether. She’s said that my book feels relatable and hopeful for teen girls, that it speaks to some of their pressures and challenges in an authentic but entertaining way. 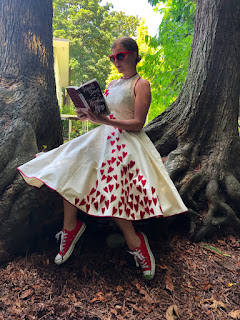 Mostly I hope my book makes people smile. It’s meant to be entertaining. There’s grief and there’s heartbreak, but hopefully there’s laughter, too, and a few joyous kissing scenes. I try to merge humour with hardship, so the “feels” run in tandem.

There are so many talented bookstagrammers. I was pretty overwhelmed when I joined the site. My fave though is Carmen @tomesandtextiles. As both a costumer and writer, I’m naturally drawn to the way she combines clothes and books in her imagery. She’s also an intelligent, passionate, supportive, articulate voice for the community. She does it all.

I love romances. I read them voraciously. But so many focus around girls who are beautiful and guys who are strong. I’d like to diversify that narrative for readers who don’t self-identify with those traits. When I was teenager I assumed I didn’t deserve romantic love because I wasn’t like the heroines in the love stories I encountered. Boys fell for girls because of how they looked. I want to write stories for and about other kinds of girls. Whether or not my heroines are considered conventionally pretty, their looks aren’t pivotal to their love stories. I hope that if readers see more stories like that out there, maybe they’ll find themselves represented in ways that help them avoid the crippling self-doubt I suffered.

Edie spends much of the novel clinging tenaciously to her sneakers while her cousins try to make her over. It’s my way of playing with the Cinderella motif that weaves through the source material. Edie gets her glass slippers, but she knows in her heart that only one pair of shoes will bring her closer to the kind of love she really wants: the shoes in which she most feels like herself.

I read Tomi Adeyemi’s Children of Blood and Bone this past spring and was blown away. She uses familiar fantasy tropes but she draws on cultural traditions we don’t see as often within the genre. Her writing is so strong, her magic unique, her world building immersive, her characters flawed but relatable. She’s a genius. And the afterward will break you.

https://recitrachel.com (though I *may* be biased because we have matching dogs) 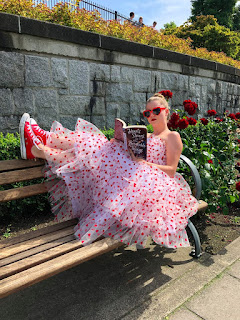 I’m not the best judge of my own work. Before I put my writing into the world, I wanted an editorial process to ensure the work was as strong as possible before reaching potential readers. As a theatre artist, I’m also accustomed to working collaboratively. My work is always better for the input of others. Therefore I went traditional, mustering patience until the right manuscript found the right editor, who could identify the weaknesses in the story and draw out the strengths.

People should write reviews to create a culture of response to a work, providing links between readers who are looking for their next story dive. It takes a lot of kind, articulate responses to combat the generic, mean ones, but together we can create a community of readers who are truly invested in sharing their ideas about stories with each other. Whether a response is positive or negative, being able to frame it in a way that helps direct other readers is a gift to the reading community. Be honest. But be kind. Authors are human too.

What stories would you like to see retold that you haven’t encountered already?

Mansfield, Massachusetts is the last place seventeen-year-old Edie Price wants to spend her final summer before college. It’s the home of wealthy suburbanites and prima donnas like Edie’s cousins, who are determined to distract her from her mother’s death with cute boys and Cinderella-style makeovers. Edie has her own plans, and they don’t include a prince charming.
But as Edie dives into schoolwork and applying for college scholarships, she finds herself drawn to two Mansfield boys who start vying for her attention. First there's Sebastian, Edie’s childhood friend and first love. He’s sweet and smart and . . . already has a girlfriend. Then there's Henry, the local bad boy and all-around player. He’s totally off limits, even if his kisses are chemically addictive.
Both boys are trouble. Edie can’t help but get caught between them. Someone's heart is going to break. Now she just has to make sure it isn't hers. 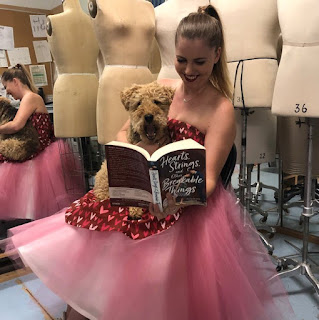 
I'm a writer, costume designer, and lover of beautiful things. I'm on the fulltime faculty in the Department of Theatre & Film at the University of British Columbia where I also take any writing class they’ll let me into. When not obsessing about where to put the buttons or the commas, I can be found running by the ocean, eating excessive amounts of gluten, listening to earnest love songs, and pretending my dog understands every word I say.
My website contains some of my comics and costume designs. Meanwhile, if you’re looking for me, keep your eyes posted for an insanely cute dog, a tired sewing machine, and a large compliment of neuroses. I’ll be nearby.

Hearts, Strings, and Other Breakable Things by Jacqueline Firkins
Goodreads
Posted by J Lenni Dorner at 12:00 AM