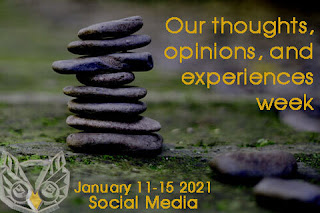 At the end of 2020, we asked what YOU, our blog readers, wanted us to cover in 2021.  Several of you provided suggestions and, for certain of those topics, we thought it would be fun for the OA team members to provide our own thoughts, opinions, and experiences.  This week, we're tackling how to use Social Media without spending hours doom-scrolling.

I am not a social media butterfly (which seems to be a common thread among the OA team). I get along using Twitter, but almost nothing else. I deleted my Instagram a while ago for privacy reasons and I don't like to post photos of myself on social media, but I can't bring myself to use it for posting ~book aesthetics~ because I feel like I'm just...really bad at taking pictures??

I'm gonna start out by disagreeing with Dena, who suggested not getting involved with politics. If that's your jam, go for it. I like to engage with current events just a little bit, just enough to join the conversation, mostly because I don't want to get involved to the point where I don't fully understand what's going on. If you're completely disengaged from current events, that can put some people off.

For some more concrete suggestions, I asked a writer friend how she is so engaged on Twitter and has so many followers (like five times as many as I have). She broke it down like this:

Reddit is a bit different from other social media sites authors tend to use, since most Reddit users are anonymous, but there are a couple options for getting your work out there.

Using social media can seem like a chore. If that's how you feel about it, you're probably spending too much time on it. Make a few rules or goals for yourself, like engaging with one other writer on Twitter every day, or writing a 500-word short story every day. Keep it simple! And remember, the longer you spend on social media, the less time you're spending on your writing.

We hope you've learned some useful tips and skills this week! Go forth and conquer the social media sphere!