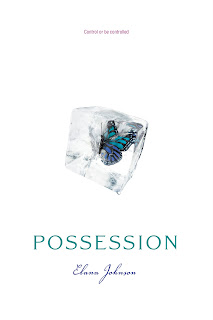 Vi knows the Rule: Girls don't walk with boys, and they never even think about kissing them. But no one makes Vi want to break the Rules more than Zenn... and since the Thinkers have chosen him as Vi's future match, how much trouble can one kiss cause? The Thinkers may have brainwashed the rest of the population, but Vi is determined to think for herself.
But the Thinkers are unusually persuasive, and they're set on convincing Vi to become one of them... starting by brainwashing Zenn. Vi can't leave Zenn in the Thinkers' hands, but she's wary of joining the rebellion, especially since that means teaming up with Jag. Jag is egotistical, charismatic, and dangerous--everything Zenn's not. Vi can't quite trust Jag and can't quite resist him, but she also can't give up on Zenn.
This is a game of control or be controlled. And Vi has no choice but to play.
Review: I want to make out with this book. Hug it. Treat it to dinner and a movie. Hold its hand all night long. That's how much I loved it. Elana Johnson, a.k.a. the Query Ninja, packs so much awesome in her debut, it's insane. First of all, Vi is one heck of a main character. The word 'snarky' gets thrown around often in the YA community, but Vi embodies it perfectly. Sure, she's blunt when she needs to be, and is unwilling to compromise to what other people want, but she also has the biggest heart you'll ever find. Dystopians aren't exactly known to feature a hilarious yet reflective voice, and that's precisely why I found Vi so refreshing. I can picture her walking down the street and see her in the world Elana creates.

In fact, that's my next point--the world. If you ever want a crash course in how to weave rich, vivid detail and a fast-paced plot, this is the book for you. Can you imagine living in a place where holding hands was a crime? Or where other people's voices crowded your mind 24/7? OR where freakin' robots watched your every move? *shudders* OR where people were grouped into regions known as the Goodgrounds and the Badlands??? Yep. Vi has to deal with that, plus a past that keeps popping up when she least expects it. Oh, and two super cute boys...
Which leads me to Zenn and Jag. Good Boy vs. Bad Boy. Here's the thing: don't let those labels fool you. The love triangle works so well because both guys are layered and complex. Just when you think you know which one fits best with Vi, the other sneaks up on you and changes your mind. Frustrating? Yes. But oh-so-fun.
To wrap it up, I'll just say two final words.
The. Ending.
That is all.
Make sure you join the Resistance and go pick up your copy of POSSESSION when it comes out on June 7th!!
Reminder: Come back tomorrow for our epic Mystery Agent Contest!! You can check the rules out here. Best of luck to all who enter!
Posted by Amparo Ortiz at 6:19 AM