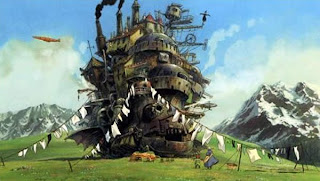 I only discovered Diana Wynne Jones recently, and I'm deeply saddened to have already lost her. A few months ago I wrote about Howl's Moving Castle on Operation Awesome, one of my favorite books I read last year and all time. I don't think she's been as well appreciated in the United States as elsewhere around the world, so every reader who found her felt that she was their own discovery. I was no different -- Sophie and Howl were a revelation. The work filled a hole in my heart I didn't know was there.

A few months later, one of my beta readers commented that my newly completed novel reminded her of Diana Wynne Jones, circa her first book, Witch's Business, but in an American voice. I actually cried. It was one of the nicest things anyone ever said to me. If only it were true and that my career would be a shadow of hers!

I've since read another five Jones novels, and I have a long way to go to work my way through her canon. Amazing to me is that her most recent novel, Enchanted Glass, written while she was ill, is one of my very favorites -- a mature, satirical work that asks a lot of young readers and gives more back. The world needs more books like those of Diana Wynne Jones. Until then, we have the ones she left us.
Posted by Kell Andrews at 9:39 PM

I haven't read any of this lady's works, but your post has made me want to hunt them down!

I discovered her within the last year or so too, and since reading Howl's Moving Castle I've gone on to try out probably a dozen of her others. They're all so good. The world lost somebody really special yesterday.

I have an entire shelf of her books, but Howl's Moving Castle remains my favorite. Sophie is such a great protagonist. Peace to you, Ms. Wynne-Jones.

I haven't discovered Ms. Jones yet. You definitely make me want to read them.

I only just found about her passing today. Such a shame. I love The House of Many Ways, and her Chrestomancy books, they are wonderful.

I've been a fan since May of 2009, when I first read Howl's Moving Castle. The book was life changing for me because after I read I began writing again. I feel I have Diana to thank for that, she really inspired me to write again.

I was so sad to find out about her passing. I will miss her very much.

I've read a few of her things, but have stayed away from Howl's Moving Castle. I liked the movie a lot, and I've heard from others that the book is better. So in this case, it's a fear of the book ruining the movie for me!