YA Boys and Actors

Whenever I sit down (or walk around) to brainstorm what my characters look like, I usually rely on movies and TV shows. I know not every writer does this, but I love "using" people.
Well, just their faces...
And abs...
*blushes*
ANYWAY, I get an idea for a fake dude. This Fake Dude has to look like something, right? So I browse through my collection of favorite Real Dudes to see if I can find a good fit. If not, there's always Google. And my imagination. But when I do find a good fit, I stick with it pretty much the whole way through. Real Dude is now my Fake Dude forever.
Why am I talking about this? Well, I've been noticing how YA readers have been advocating for certain actors to play their favorite YA male characters in both movie and TV adaptations. It's like the world will end if Real Dude X doesn't get cast as Fake Dude X.
Case in point: 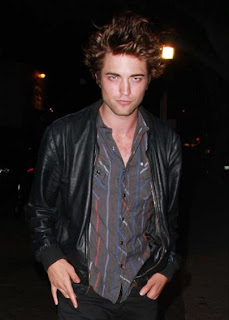 Fans were FUMING when they found out Cedric Diggory Robert Pattinson was cast as Edward Cullen in Twilight. In their minds, this Real Dude was not their beloved Fake Dude.
Recently, it was revealed that another actor came thisclose to getting the part: 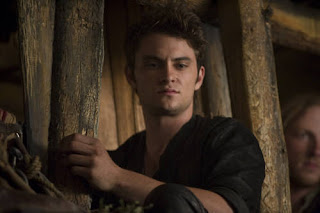 That's the lovely Shiloh Fernandez from Red Riding Hood. That's also him glaring at Robert Pattinson for stealing his sparkly vampire thunder. Who knows how fans would've reacted to the news that Shiloh would be their Edward? Maybe they would've freaked out, too. Or maybe they would've swooned their faces off. *shrugs*
Then there's this other guy: 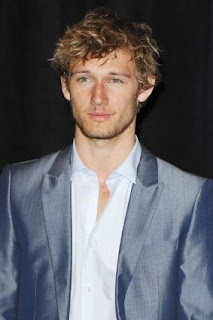 It seems like every Cassandra Clare and The Mortal Instruments fan wants Number Four Alex Pettyfer as the uber-awesome Jace Wayland *sigh* They will hurt someone if this doesn't happen. Or kick puppies. Maybe both. To fans, Alex is Jace. P-e-r-i-o-d. As a Jace fan, I do see Alex as Jace in physical terms, but... um...
*withholds opinion for fear of being stoned to death*
But I'm asking you, writers: do you envision your male characters as actors, too? If so, pretty please tell me which ones! I LOVE discovering new abs to-
I mean, new faces to stare at. :)
Posted by Amparo Ortiz at 6:35 AM

Email ThisBlogThis!Share to TwitterShare to FacebookShare to Pinterest
Labels: actors, Amparo, boys in YA, Characters, Writing, YA

Normally I don't have someone in mind, but with my current WIP, I cut pictures out of magazines to create character collages. There weren't many great pictures of guys that fit the image I had in mind, but Chase Crawford came pretty darn close. ;)

Ooh! Fun post! My MC is JESSE SPENCER!!!! *swoons* And yes, my husband is fully aware of my crush. I've spoken to Jesse a handful of times on Twitter, AND HE'S SOOOO NICE!!! He only makes me love my Fake Dude even more! *hugs Twitter so hard that Twitter crashes* ... :D

Okay...I do love me some Alex P because I think he is pretty makes people realize that aliens can be sexy, BUT I'm really annoyed that everyone seems to think he would be PERFECT for every YA male role because he is blonde and built (i.e. Mortal Instruments, Hunger Games, etc.)

And...my fake boys...I can't hide my secret obsession for American Idol cast members. I needed an alien to picture so one of my CP's suggested Adam Lambert and that's when I became a Glambert. Don't judge...I also dream about Jason Castro's striking blue eyes and Wheatie's box smile. *lesigh*

Haha, Amparo! You're so funny.

In general as a writer and reader, I don't picture the faces of the MCs that clearly. I suppose I'm looking through their eyes -- I see what they see instead of what they look like.

Well, after I finished my second book, I envisioned the perfect actor to play my seventeen-year-old Aidan. He might be a bit old, but with the right lighting he could certainly pass.

And the drum roll.... Zach Efron. He'd need to where green contacts though. MY mc has green eyes. I'm real picky about eye color.

It annoys me when an author goes to great lengths to describe a character and they cast an actor with different coloring. It took me ages to get over HP having blue eyes when JK makes a point in all her books that Harry has bright green...

My fake dudes look like actors or hot guys I know. Now sense in making him look like R-Pat or and of those awesome looking young men because I don't my fake dude to be type cast that way.

I'm more like Kelly. I just don't see their faces that clearly. I mean, yeah, I describe down to minute detail every line in their face, but when writing, I don't really focus on it so much, and I've never found an actor that looks like how I see my characters (I've tried...it's hard! lol)

OH, Amparo...you're hilarious. I had no idea that SHiloh (uh, who?) could've been Edward. I'd never heard of the books prior to the movie coming out on dvd, but Rob is plenty hot enough. Usually I see an actor that fits who I'v imagined. Since my romantic players aren't YA I can get them a bit older...say Chris Pine and you know him as Dean Winchester.; )

As I write and edit, I envision the scene like a movie in my ahead....I can hear the characters saying their "lines" and I see the way they move. Usually I use actors who's work I know well....I've seen them in enough things to know how they'd act in any situation. Many of my characters are played by actors from a soap opera I've been watching since high school. I "know" those actors so well....some for 10+ years.

I usually have a type in mind, if not a specific actor. Partly because when I'm in my teen girl MC's head, it's perfectly acceptable for her to be lusting after a teen guy. Not so acceptable in my 39-year-old everyday persona for me to do that. Ick.

I also think about who would star as my characters, but I've come to realize that by the time my book(s) will ever be made into a movie, the original actors I thought of would be more suitable to play the father or grandfather!!

I do the same exact thing!!! The Fake Dude for the hottie in my paranormal YA I'm querying right now is the lead actor in Disney's new movie Prom. And I can't picture him any other way.

I can't find anyone who looks like my contemp. romance hero. He's so unique and speshal. :D

I do. I do! My favorite character in my WIP is (not looks like, not has hair like, IS) Zac Efron. There's no way around it.

I also use obscure athletes. Yikes! I know!

So glad to hear that so many others do this!! :-)
I love me some Ben Barnes (from Narnia)! I also just saw the trailer for Prom, and totally agree with Jeanmarie that the lead would make a great YA hottie!!

Funny. That's pretty much all I could think about as I watched Red Riding Hood this weekend (that Shiloh could have been Edward). I do use photos of actors and actresses for my books... definitely helps me get a visual. MC in my WiP is John Patrick Amedori.

I love this post! Alex Pettyfer for Peeta Mellark! Oh, if only they had elections for book-to-film casting. ;)

Angelica, we haven't forgotten about the March Mystery Agent contest and plan to post the Grand Reveal very soon. Thank you for being patient with us!

I am definitely guilty of this! :) Sometimes I can't even start writing until I find the perfect cast for all my characters lol. It just helps me visualize them in my head so much better. My latest WIP has Ulliel Gaspard. Before that was Ben Barnes and Johnny Pascar.

And the "researching" for the perfect guy characters is just so darn fun!

I wanted Henry cavill for Edward....sadly, he was too old.