Some of the posts around the blogosphere suggest fans are ready to light the torches and sign the petitions in the "Edward Cullen has been cast" circa 2008 style. Why? The Hunger Games male leads have been cast.

Amparo did an awesome post yesterday about the casting of Liam Hemsworth and Josh Hutcherson as Gale and Peeta from The Hunger Games.  Check it out here.

And she got me thinking about books -V- movies.

Casting choices for popular books are hard. No, they probably seem impossible. Three or four people have to see hundreds of actors and actresses to embody the role millions of people have read, love, hated or fought over with T-shirts proclaiming their love (Team Edward -V- Team Jacob anyone?).

The problem is that one person will never match the image of a character millions of people have created in their heads. The author gives us the tools to show their personalities, looks and voice, but I can bet the Edward, Peeta, and Gale I have in my head are nothing like you imagine them.

And, for me, book Edward doesn't look like Robert Pattinson... but he is movie Edward.

And that's my point -- the movie is the movie. The book is the book (and I do love The Hunger Games series). Everyone is entitled to their own opinion, but I'm interested to see how these casting choices play out. So long as there is something to embody the characters -- and they don't take huge liberties with the story -- I'm happy. I'll give 'em a shot.

And Suzanne Collins is happy.... and she wrote the books!

Hunger Games author Suzanne Collins is also thrilled with Hutcherson's portrayal of Peeta. When asked to respond to the casting news, she had nothing but praise. "I was fortunate enough to be in the room with Gary Ross when Josh came in to audition," Collins said. "Three lines into the read I knew he'd be fantastic.  Josh totally captured Peeta's temperament, his sense of humor and his facility for language. I'm thrilled to have him aboard."

And, hey, there is always hair dye and contact lenses -- it worked for KStew, right? 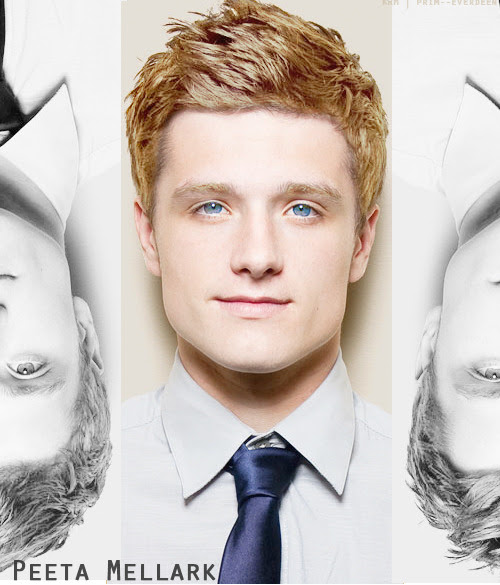 It's amazing what Photshop can do, right?
Posted by Lindsay at 5:06 AM