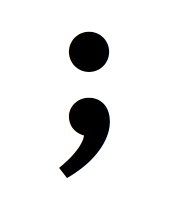 I had a meeting with my local writing group the other night, and we had a discussion on the use of a semicolon. Now, back in the early days of writing, I had no idea how to use a semicolon. I figured it was just a strong comma. So thinking I was clever, I posted my opening pages to a critique forum. One guy told me that it might be good to proofread before posting for comments.

I thought I had.

I mentioned that I did indeed proofread. He commented that he thought not, considering I'd misused the semicolon 5 times on the first page. (And yes, I did use a lot of them in the early years). So at that point, I researched the proper usage of a semicolon. And considering that all the writers in my local writing group had no idea the proper usage (and one is a copy editor for a newspaper), I thought I'd post the rules of usage on here.

The most common use of a semicolon separates two complete sentences, closely related.  Two independent clauses. Two sentences that could stand on their own. So basically, if you can't replace it with a period, you can't use a semicolon. There are some other usages, that I will share, but that is the primary one that I see misused with a lot of writers. Here is a pretty good description, taken from Wikipedia.

And if you still don't believe me, here are a few more links to convince you.

Semicolons are followed by a lower case letter, unless that letter is the first letter of a proper noun. Modern style guides recommend no space before them, and one space after. Modern style guides also typically recommend placing semicolons outside of ending quotation marks—although this was not always the case. For example, the first edition of the Chicago Manual of Style (1906) recommended placing the semicolon inside ending quotation marks.[5] Applications of the semicolon in English include:


This is by far the most frequent use currently.[6]

This is the least common use, and is mostly confined to academic texts.[8]

Posted by Kristal Shaff at 8:29 AM