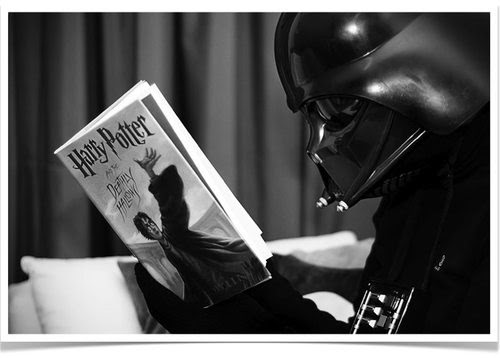 I subscribe to Storyfix.com and today Larry Brooks has a guest post up by Art Holcomb that you really ought to read, you know, if your story has like a bad guy or something.

It's called The Hopes and Dreams of Truly Awful People.

In it, Art points out that your villain's motive must be clear, and must be more specific than merely good and evil (unless that's the main theme of your work). But something he said almost in passing just made me giggle.

He said, "If appropriate, repay him and delight your reader by writing for the bad guy a humanizing “Darth Vader Rescues the Kittens” scene at least once in a story."

This is brilliant. It made me think of all the stories I've read, or watched or listened to, that have done just this: humanized the villain to get me even more emotionally invested. It makes it all the more heartbreaking when the conflict between the hero and antagonist crushes the sometimes-good villain. Let's see an example.

Here's my version of Darth Vader Rescues the Kittens:

The sound of his mechanical breathing never bothered him before, but this evening in the dark alley behind the Burger Emperor, it sounded more hollow than ever.

He'd just killed his mentor, his savior from the stupid little dust planet he'd been brought up on. Somehow over the years, that savior had become his nemesis. It might have had something to do with Vader's massacre of all the baby Padawans. Really, who keeps track of these things?

None of that mattered now. Obi-Wan was gone.

Slumping to the garbage-stained asphalt, Vader tortured himself, reliving his old master's last moments over and over again. If Obi-Wan hadn't been so damned self-righteous, he could have gotten by with a severed arm or leg, easily repaired. But no. He always had to fight to the death. It was his fault he was dead. Vader slurped the last of his Jabba Hutt shake through a drinking hole in his helmet.

Next he'd probably have to kill his long-lost son. His breath caught at the thought, and that one moment of pure silence allowed him to hear something he never would have heard in the cacophony of his normal existence.

He jerked his heavy headgear to the side so his eyes could behold the source of the whimperish sound. It came from the garbage unit. Prying off the lid, Vader searched the dark recesses of the bin. At last he found the crying creature. Creatures. There were five impa-kittens curled up in a box, naked of their fur, huddling together for warmth. Only one of them still had the strength to cry out, its tense little neck jutting up from the rest to make its voice heard.

Something inside him melted as the death-defiant creature pressed its cheek against his black-gloved finger.  "I'll call you Anakin," Vader purred.

All at once, a terrifying noise disrupted the moment. It was the beeping of the garbage unit, the only warning before the walls would slowly, methodically crush everything within their filthy realm. Vader had mere minutes to act, but he only needed a millisecond.

It was done. He had ended a life today. But he had saved five. The balance was more than restored. As the sun rose beyond the vaulted walls of the alley and the last embers of the garbage unit faded to black, little Anakin purred. For Vader, it was a new beginning.


A bit about the screenwriter who wrote the article...


ART HOLCOMB began his writing career in the sixth grade (at age 13) when one of his plays was professionally performed by the American Conservatory Theater.

He has published poetry, essays and short stories and has written more than 50 comic book stories for franchises such as THE X-MEN, as well as original and licensed properties for Defiant, Valiant, Acclaim, Big Entertainment, FUNimation, Marvel Comics, DC Comics. His screen work has appeared on UPN, the Sci-Fi Channel and the SHOWTIME Channel.

He is the co-founder and former Editor-in-Chief of the creative development firm ANDROMEDA ENTERTAINMENT, which adapts screenplays into graphic novels, creating one of the earliest sources of “illustrated screenplays”.

Read more about him here.