1- Having lived in Vermont, do you have any fun maple syrup stories or "leafer" pictures to share with us?

In my first year working in a school, a seventh grade kid who was a total delinquent brought me some “home-made” maple syrup in a mason jar. I was touched. And then one of my colleagues warned me not to eat anything that any of the kids brought in claiming to be “home-made.” Fortunately, I don’t like maple syrup anyway, so it wasn’t a big loss. 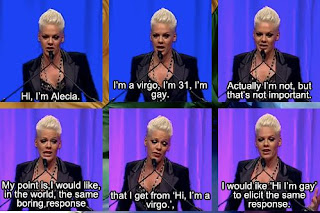 Aries. I’m friends with a lot of Geminis and Virgos. Explanation anyone?

3- What is the most memorable trait or visual oddity of one of your characters?

Hawken has piercing blue eyes and a scratchy laugh.

4- Did our world's need for diverse books, such as those with gay main characters, play a factor when you wrote this book?

Yeah, it did, but the idea for the book—a kid who writes letters he never sends—came to me about ten years ago, when there weren’t so many LGBT YA books out there. There are many, many more books with gay characters out there now than there were way back when.

5- Have you been playing Pokémon Go? If so, have you "caught them all" yet?

The Onion ran a helpful FAQ article about Pokémon Go. Anticipating my first question, it asked: “What is a Pokémon?” And the answer, as I suspected, was, “This is not for you.”

6- What was the inspiration behind the alligator/ crocodile Pez-like dispenser on the cover of your book?

I was trying to think of something silly that a high school kid might carry around in his pocket. I’m not sure why I settled on a PEZ dispenser, but I’m pretty sure the gator really was inspired by the albino alligator that, at least at the time, lived at the California Academy of Sciences in San Francisco. I didn’t have much say in the book’s cover design, but I did agree to the idea of the PEZ dispenser appearing on there.

7- As a reader, what most motivates you to buy a new book to read?

The last two books I bought received a lot of awards and praise from professional reviewers. They were The Sellout by Paul Beatty and A Brief History of Seven Killings by Marlon James. They’re both incredible, but they’re not the kind of books that I’d recommend to anyone lightly. When I buy YA books, I usually buy them because a friend’s told me to read them.


8- On sites like Goodreads, how important do you feel that star ratings are, especially compared to reviews?

I’m not sure. I’m very new to Goodreads so I don’t know how it works or how much it influences what people choose to read.

9- If James Liddell were a cheese, what cheese would he be?

Brie, I suppose. He’s a lot softer on the inside than he looks on the outside.

My agent suggested we send my manuscript to a few of the big publishers, then try smaller publishers if no one bit. I’m still really grateful to my editor at HarperCollins for showing such interest in the book.

11- I hear that you cook. Do you have a favorite recipe to share with us?

You hear that I cook? Who have you been talking to? I’m a big fan of Mark Bittman’s old cooking blog “The Minimalist” in the New York Times. Here’s a version of one his very simple standbys:
Stir Fry Tofu
Heat a little bit of grapeseed oil in a pan. Sauté some minced some ginger and garlic for one minute. Add cubed extra-firm tofu and the white parts of scallions and cook for one minute more. Add the green parts of the scallions. Shower it all in some soy sauce. Cook a little more. Eat.

12- Anything else you would care to share about your book and yourself?

Nothing else about me to share, thanks, but here are a couple of book recommendations: The Mystery of Hollow Places by Rebecca Podos and Skyscraping by Cordelia Allen Jensen. Also, I haven’t read it yet, but I’ve heard great things about The Movie Version by Emma Wunsch.