The Seclusion by Jacqui Castle


1- Oxford Comma question! Did you do a book dedication like "THIS BOOK IS DEDICATED TO MY PARENTS, (a person) AND GOD"? Or did you avoid referring to a parent as a diety? 😄

Well, I only dedicated the book to two individuals, so hopefully, there is no confusion. The Seclusion is dedicated to my mother and my late grandmother. My main character Patricia, or "Patch" is named after my grandmother.

I've always loved to write and have been a freelance writer and journalist for going on ten years now. I enjoy taking a complex topic or something that I know very little about and learning through the process of breaking it down and writing a descriptive piece. However, for some reason, I never envisioned myself writing fiction and never even tried until a few years ago. I haven't stopped since.

3- How can people best support the Endangered Species Act, including preventing animals from going extinct by protecting critical habitats?

In my opinion, the most important thing people can do at this time is help rally others to vote in November. Wonderful candidates are running for office who will work hard to protect the Endangered Species Act and other policies that help protect and conserve. But, they can't if they don't win.

One organization I have been volunteering for in my spare time is Postcards to Voters, which sends election reminders to registered Democrats in crucial election areas. Just text 'Hello' to 1-484-ASK-ABBY and you will be walked through the process and can start writing postcards right away.

The Endangered Species Coalition (Endangered.org) fights to protect the Endangered Species Act. They recommend calling your representatives and writing a letter to the editor of your local paper. Their website provides a wide range of resources for those wanting to become even more involved.

4- Would you share a picture with us of your book with a cup of tea? 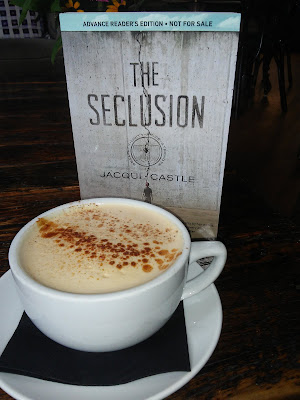 Well, the publication of my book in September has definitely placed a big check mark on my list of writing goals. Past that, I would love to just keep writing, with the aim of publishing a book every couple of years. The Seclusion, if everything stays on track, is set to be a trilogy, and I'm working my way through the first draft of book two.

6- What is your favorite book (by someone else), and what do you love most about that book?

That is a tough question! It's like asking who my favorite child is, and the answer is the same in that it depends on my mood when you ask me.

I just finished reading the entire Chaos Walking series by Patrick Ness, and each book in the trilogy stuck with me for weeks after I closed the last page. The series has earned its place on my favorites shelf. American Gods by Neil Gaiman and The Poisonwood Bible by Barbara Kingsolver are also two of my favorites. For me, it is not necessarily about the genre of the book. I read all genres. If I find myself carrying the story with me and thinking about it weeks later, then that speaks for itself.

7- Dare I ask how my fellow Native Americans fare in The Seclusion?

Not great. Though Native Americans are not explicitly mentioned, their fate is implied. Like everyone else in the story, they are forced to comply with the rules of New America by moving to mass, easy-to-surveil urban centers, leaving their past and culture behind, and following the doctrine of The Board.

😞 So, history repeats itself. No surprise to me.

8- What most helped you to improve your writing craft?

Writing, writing, and more writing. And also, reading. I aim to read at least three books a month, and regularly have an audiobook in the mix as well. I find that when I begin my writing sessions with ten to twenty minutes of reading first, then I am more motivated and inspired to work on my own projects.

The protagonist, Patch, has a nervous tell in which she spins a ring on her ring finger with her thumb when she is anxious.

10- In what ways are the main characters in your book diverse? https://diversebooks.org #WeNeedDiverseBooks

Yes, representation is incredibly important, and I strived to create a diverse world that fit within the limits of the plot of The Seclusion.

It is revealed early in the story that a main character's ancestors were Mexican immigrants, and that becomes an important plot line. There are two same-sex relationships present in the novel. Oliver, my favorite character, is of middle-eastern descent, and another strong character is African American. It is tough to dig into the backgrounds of the characters in The Seclusion because the story is told from the viewpoint of a character who knows very little about the history of her country, or about other cultures in general. So, we are left exploring the world from her paradigm.

11- Which character has your favorite Personality Contradiction?

Definitely Oliver. We are introduced to Oliver in the middle of the book, and he is by far my favorite character. Oliver is eccentric and a bit kooky, but in many ways he is more grounded than anyone else in the story.

12- Your book holds a crystal ball up to America. What, in your opinion, is one thing people could do to make sure your book stays in the "fiction" genre, rather than turning you into a prophet?

Throughout the entire publication process, I have asked myself this question. The Seclusion presents an extreme future that sadly, at the moment, doesn't really feel that extreme.

I can think of two points of action of vital importance right now, and they go hand in hand. The first is for people to demand transparency from our leaders above all else. Another is to protect the free press in every way possible. The world would be a far more dangerous place without them.

Usually a suggestion from a friend or fellow writer or reader with a similar taste in books. I have an active bookshelf on Goodreads and receive recommendations through that community. Also, I try to support Inkshares authors and other debut authors as often as I can. When I find an author I love, I often work my way through their entire catalog.

14- How will you measure your publishing performance?

Early reviews have started to roll in, and that has been an exciting process to witness. So far, they have been overwhelmingly positive, so for a debut novelist, I am breathing a sigh of relief. The Seclusion is a controversial book that some will resonate with and others, well, they may be rubbed the wrong way. That is alright. Art is subjective.

What I want is for those who enjoy the book to walk away still thinking about the story. To carry with them that thread of hope that is prevalent in dystopian novels. To be propelled forward by the feeling that no matter how bleak our surroundings, there is always a way to fight for wisdom and truth. There is always a path forward.

15- What was the deciding factor in your publication route?

I took a non-conventional route and used a hybrid publisher. Inkshares operates as a middle road between self-publishing and traditional publishing. The author runs a crowdfunding campaign and presells copies of their book. Once a preorder goal is met, that signals to the publisher that this is a book people want to read, and they step in and provide all of the services you would expect from a traditional publisher — developmental editing, copy editing, cover design, bookstore placement, marketing, etc…

Breaking into the market as a first-time author is near-impossible. Because The Seclusion deals with timely subject matter, I knew that I wanted to get the work out there as soon as possible to see what people thought. So, Inkshares seemed like a good fit. I put up a few chapters from my original manuscript, then launched my campaign. The reception was incredible. During the 5-month campaign for The Seclusion, 750 copies of the book were pre-sold to backers.

Though the crowdfunding aspect was challenging, hybrid publishers like Inkshares are an excellent option for first-time authors. It's something to consider for those who aren't afraid to put in the crowdfunding legwork, want to get their name out there, and don't want to take on the editing and marketing responsibilities that come along with self-publishing.

You'll have to ask me again once the book has been out for awhile! During the publishing campaign, most of my pre-orders came through people I connected with on Twitter.

For the launch, there will also be a press circuit that includes live events, radio spots, giveaways, interviews, and guest posts.

Once the buzz dies down, I will continue to keep folks updated on future projects through Twitter and Goodreads. Readers are also welcome to send me an email (JacquiCastle@gmail.com) if they would like to be added to my mailing list.

17- Your in-the-works Apate book sounds fun and made me wonder... Have you been following @RogueNASA on Twitter?

Yes! I do follow @rogueNASA on Twitter, and that is a fabulous link to draw with my in-process novel, Apate. The story is still in the early stages, but I'm incredibly excited for it to develop. Apate will take place in the near future and will be told from two vastly different perspectives — a congressional intern's and a NASA scientist's. There will be an asteroid (named Apate after the Greek Goddess of deceit) plummeting toward Earth, and let's just say that all is not what it seems to be.

18- What is one question or discussion topic which you would like the readers of this interview to answer or remark on in the comments?

I am planning on hosting a discussion on dystopian literature in September, so I would love to know what draws dystopian readers to the genre. 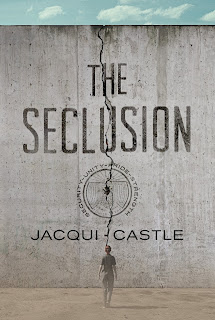 “Jacqui Castle’s novel sets the hook in a wickedly-quick heartbeat. Not only does her eerily prescient story keep that hook in place throughout, it often leads to moments where you feel a chill that’s driven not only by her words, but also by the words we hear in the news and social media every day.” —Mike Rich, author of Skavenger's Hunt and screenwriter of The Rookie, Radio, and Finding Forrester

“If you love The Giver, you will love The Seclusion. Castle paints a well-developed world in a realistic future with a pair of unlikely heroes you want to cheer for. There are no easy victories in this dark, gritty dystopian that checks all the right boxes." —David Estes, bestselling author of The Dwellers saga and The Fatemarked epic


Jacqui Castle is a freelance writer living in the Blue Ridge Mountains near Asheville, North Carolina. Her work has been published in a variety of online and print publications, including Mountain Xpress and WNC Woman. The Seclusion is her debut novel.


The Seclusion by Jacqui Castle
Posted by J Lenni Dorner at 12:00 AM