A former Operation Awesome Team Member dropped by for an interview. Check out this amazing new book cover and great giveaway!


1- Could you tell us a little more about the Pens for Paws Auction?

I started P4P out of a desire to help a sanctuary where I was volunteering at the time, Fat Kitty City. They are unique for being a cage-free sanctuary for domestic cats--some of whom will live out their lives there, and others who are adoptable. FKC goes out of their way to take in special-needs cats, including those that are FIV+, and feral cats, too. I started volunteering there in 2008, mostly helping to photograph the kitties and to socialize them. These cats are extremely grateful for attention and a friendly lap! 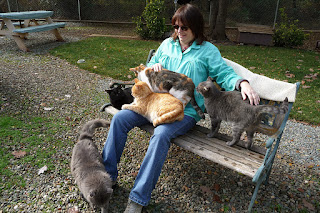 I was trying to think of a way to fundraise for Fat Kitty City that would tap into my existing network of publishing contacts, so in 2012 I started putting the word out that I needed donations. The publishing community--including authors, editors, and agents--stepped up to offer some fantastic items for bid. I haven't quite managed to run the auction every year, since it's a one-woman show and I get overwhelmed trying to run the auction and manage my own book tasks. But I hope to revive it next year!

Spending a lot of time alone as a kid meant that I also spent a lot of time in my own head; the way I expressed myself was through drawing and writing. For a while, it was genuinely a tossup whether I was going to stick with art or writing as a career. Writing pulled ahead for a while, but I'm now trying to combine my art and writing in creative ways, whether that means cover art, interior design in my books, or even creating images for marketing campaigns. But reading is what really gave me the jumpstart to share my writing--it's so fascinating to spend some time in others' heads.

4- What was the best part of working with the Operation Awesome Team?

The community! I knew I always had trusted friends who I could vent to, or ask questions of. We've had an amazing font of wisdom in our collective, and I love that it's continued to evolve. I learned so much during my tenure, with the biggest lesson about sharing your knowledge with others.

5- Would you share a picture with us of your book in a fun location?

Of course! This is the signpost in my garden, with some of the destinations from my favorite books on it. So of course Crow's Rest is right at home perching on it! 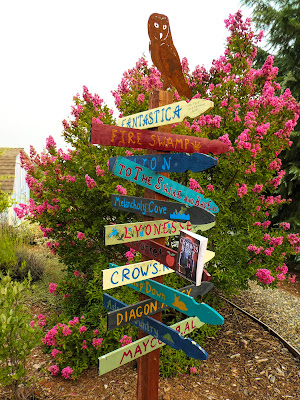 6- What is the most fun part about writing a story with Fae?

Having come into urban fantasy after writing a heavily-researched historical novel, the most fun part is making up creatures! I used Celtic mythology as a jumping off point, but I also wanted to create authentically magical creatures that would make the reader wonder which ones are from established mythology and which are the "new" generation Note: I also think making up creatures is the hardest part, because I want them to be believable within the worlds I've also created.

7- In what ways are the main characters in your book diverse? https://diversebooks.org #WeNeedDiverseBooks

My main character, Avery, shows some symptoms of mental health issues, which actually turn out to have a magical basis for her (I hope that's not a spoiler, haha). That aspect of her personality was born from my own lifelong struggle with anxiety and depression, and how my teenaged self wished there was some "better" reasoning behind me having that imbalance. Like, what if some of my obssessive traits (like my counting things, and seeking patterns and symmetry) were actually an advantage under different circumstances? What if in another world, in another situation, they would be the key to keeping me safe?

Also, because so many of my Fae creatures swap bodies, they tend to be rather genderfluid. Occupying a male or female human is not better or worse--it just offers different sensations and opportunities. Many of them are shapeshifters, too, and their own gender is another thing they can manipulate at will (and I haven't explored it yet, but there does seem to be more than two genders in Faerie).

8- Which character has your favorite Personality Contradiction?

That would be Avery again! She can be so oblivious to some things around her, especially in relationships, and yet she has an insightful side. A way of seeing past all the noise (which often leads to her calling bullshit on people, for better or worse).

9- What is something that you know you do differently than most people?

Um, shop for clothing maybe? I just don't have the patience for it, so when I find something I like I buy it in five colors and call it a day. I do actually enjoy fashion and creating my outfits, I just hate wandering store aisles. I'll be happy when I can print outfits at home on a 3D printer.

10- Anything else you would care to share about your books and yourself?

The cover art for my Faerie Crossed series features my own photographs. What a great excuse to schedule a photoshoot at a haunted castle, amIright? My cover designer, Kelley York of X-Potions Design, worked closely with me to turn my art into a cohesive whole and I love the results. 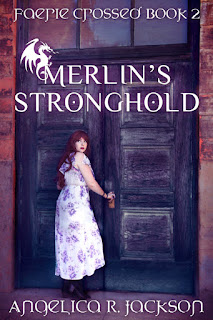 Crow's Rest, the first in the series, came out last May from Crow & Pitcher Press, and the second book, Merlin's Stronghold, will release on October 23.

I've also released a photobook of that same castle that appears on the covers, but Capturing the Castle: Images of Preston Castle (2006-2016) goes behind the doors into the decaying Preston Castle interior. And as of this writing, a fantastic actor named Brenda Scott Wlazlo just added the finishing touches to the audio version of Crow's Rest. The audiobook of Merlin's Stronghold should be out before the end of the year.

You can keep in the loop for all the news on my books by signing up for my newsletter on my website at https://angelicarjackson.com and I'm on Facebook at https://www.facebook.com/profile.php?id=100001046475887 and Twitter is https://twitter.com/angelicarjaxon . Get a look at my artwork at https://www.angelicarjackson.photography , including my pics of Preston Castle.
Posted by J Lenni Dorner at 6:00 AM