Girl with a Gun: An Annie Oakley Mystery by Kari Bovee

I have never seen this come across in any of my research. I think Annie was pretty well respected for her marksmanship by men and women alike, and she truly appreciated her fans.

Write what you want to write, not what the market dictates. If you aren’t completely sold on what you are writing, no one else will be sold on it either.

3- What's one thing most people don't know about horses?

Many people don’t appreciate what sensitive beings horses are--emotionally and physically. Because they are large and strong, people think they need to be muscled around. You really don’t need to bully them to get what you want. When a horse acts out, it is usually due to fear or pain, or a horrible memory of either. That doesn’t mean you should be a push-over for your horse, that would be irresponsible and dangerous, but learning to communicate with them is key. In the wild, horses look for leadership in the herd. It’s important to learn how to be a leader to your horse. Show him respect and leadership, and he will be a willing partner.

Reading. I’ve always loved books and getting lost in a story. Reading and writing can transport you to anywhere you want to go—and even some places you don’t, which is pretty powerful. From a very young age, I’ve always liked the idea of letting my imagination soar and creating a world of my own.

5- Annie Oakley has an Indian assistant in your book. Where or what tribe is that person from?

Kimimela is a fictional character, but she is from the Lakota Sioux tribe. Many of the performers in Buffalo Bill’s Wild West show were Sioux, so I thought it fitting. In my story, Kimi’s parents were killed by some of Buffalo Bill Cody’s men when he was an Indian Scout. He felt bad for Kimi and her brothers, so he took them home to be raised by his wife, and then later brought them to his show where he employed them.

6- What's your Twitter handle, and do you have two or three writer friends on there to shout-out to for #WriterWednesday ?

7- Would you share a picture with us of your book with a horse? 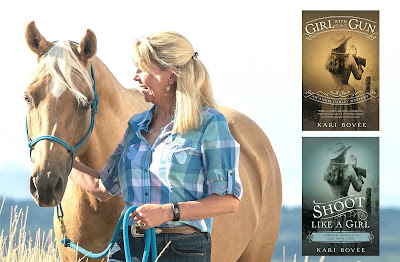 Photo of me and my horse, Handsome. Handsome was the inspiration for Annie's horse Buck in my books!

8- What are some of your short and long term writing goals?

Short term: To release the second and third books in the Annie Oakley series, and to launch another series that I’ve been working on.

Author name: Elizabeth Crook
I don’t know if she has a Twitter handle, I’ve seen posts about her, but not by her. I tried to look her up and didn’t find anything. If you are out there Elizabeth, I will follow you!!
Title: The Night Journal
Love because: The book was a pick from someone in my book club and I absolutely loved it, partly because it takes place in New Mexico, where I am from, but mostly because she handled the story of present day with the story from the past so beautifully. Her imagery of the southwest, particularly of New Mexico was breathtaking!

What I hope readers get out of my book is a sense of hope and empowerment. Especially women. Annie Oakley came from nothing, was catapulted to fame for her talents, and took the world by storm in a man’s game. She never felt the need to be anyone other than herself. She never forgot where she came from and she never let fame give her an inflated sense of herself. She seemed to be a person entirely comfortable in her skin, no matter what the circumstance.

I think it’s a constant desire to learn. I’ve attended many workshops on craft, online and live. Some of my favorite teaching authors are Alexandra Sokoloff with her Screenwriting Tricks for Authors (@AlexSokoloff), Larry Brooks’ Story Engineering (@storyfix), and Donald Maass’ Writing the Breakout Novel (@DonMaass). Margie Lawson (@MargieLawson) does some really intensive writing and editing workshops and I’ve attended several of her Immersions. I’m always looking for retreats or workshops where I think I will learn something new. Also, hiring professional editors has improved my craft because I learn so much from their critique. It takes a while to find one that really resonates with you, but once you do, it’s so helpful.

12- Where do you stand on gun control versus gun rights?

13- What is the most memorable trait or visual oddity of one of your characters?

I think for Annie Oakley it was her size. She was very tiny, 5’ tall, and slight with a very small waist, but she was pretty tough. Also, she always dressed extremely modestly – covered from head to toe, never showing any skin.

14- In what ways are the main characters in your book diverse? https://diversebooks.org #WeNeedDiverseBooks

Kimimela, Annie’s Indian Assistant is diverse in many ways. She is shunned and actually hated by another character in the book, simply because she is Native American, and she is shunned by many of her own people in the show because her daughter is usual and of uncertain birth. (Don’t want to give a spoiler!) The Native American peoples during the time period of this book (1885) were being taken off their lands and carted to reservations across the country. Buffalo Bill hired many of them on at very good wages to perform in his show. The entire show was a caricature and exaggeration of the Wild West which was dying. I’m sure some people took offense, but it was also extremely popular.

I think the journalist Emma Wilson. Emma came from an incredibly wealthy family, but when her mother and father insisted she marry “of her class” she totally rebelled and got engaged to a police officer and became a journalist resulting in her being cut off from the family fortune. What her mother doesn’t know, is that her father has forgiven her and still gives her a generous allowance. Emma loves getting her hands dirty with work, but also loves her fine clothes, being pampered, and having high tea. She is so much fun, I’d love to hang out with her.

16- Who is your favorite woman of political power and influence from history, and why?

Probably Elizabeth I of England because she was the longest ruling female monarch until Queen Victoria. She did it her way. She was under constant pressure to marry, but she knew if she did, she would have to give up ultimate control of the country to her husband. I think that must have been incredibly difficult at that time, but she had a vision for what she wanted and how she wanted to rule, and she wasn’t swayed.

17- Can you think of any small change in the world you could make to benefit hundreds of other authors or readers potentially?

18- As a reader, what most motivates you to buy a new book to read?

I love covers, so the cover has to attract me first. Then I read the back blurb, and if I’m still not completely sold, I read the first page or two. I think it’s pretty common, which is why these things are all so important for authors to know.

19- How will you measure your publishing performance?

Well, number of books sold is a good measure, but I write because I want to connect with people, to share with them and entertain them, so a good fan base would also be a great measure for me.

I’m still figuring that out. My novel came out in June of 2018, and I just released another one on September 18. I’m still in the learning phase with marketing, but from what everyone has told me, generating content is the best thing you can do to improve your sales. Keep the books coming. Writing and publishing is a long game. Nothing happens quickly, so the key is to get yourself out there. Learn about marketing strategies and try different things.

21- What is one question or discussion topic which you would like the readers of this interview to answer or remark on in the comments?

I think the question regarding women of political power in history. I like to write about empowered women in history, so it always interests me who people have liked or admired in the past—or the present.

Blurb for Girl with a Gun:

Fifteen-year-old Annie Oakley is the sole supporter of her widowed mother and two younger siblings. An Expert markswoman and independent spirit, she hunts game to sell to the local mercantile to make ends meet instead of accepting a marriage proposal that could solve all her problems, including the impending foreclosure of her family’s farm.

After a stunning performance in a shooting contest against famous sharpshooter Frank Butler, Annie is offered a position in the renowned Buffalo Bill’s Wild West Show. Finally, she has a chance to save her family’s farm—and make her dreams come true. But after her catapult to fame, a series of crimes take place in the Wild West Show including the death of Annie’s Indian assistant. The coroner claims the death was due to natural causes, but Annie is unconvinced. Then her prized horse, Buck—a major part of her act—is stolen, and she realizes that someone is out to get her.

With the help of a sassy, blue-blooded reporter, Annie sets out to find her horse, solve the crimes, and clear her good name—before everything she’s worked for is destroyed.

Born in northern New Mexico, Kari developed a love of reading, writing, and history early in life. Her most treasured Christmas gift as a young child was a toy typewriter. After graduating with a B.A. in English Literature with an emphasis in Creative Writing, Kari found work as a technical writer at a Fortune 500 tech company. But, her love of story-telling never waned. While staying at home with two young children, Kari wrote her first novel and hasn’t stopped. She and her husband live happily in rural Corrales, New Mexico with their horses, dogs, and cats.


Girl with a Gun: An Annie Oakley Mystery by Kari Bovee
Posted by J Lenni Dorner at 12:00 AM