Me vs. the Multiverse: Pleased to Meet Me by S.G. Wilson


1- How many cats have you won over to your side in this universe?

I thought I’d won them over, but it was all an illusion! One of our cats has taken to protest pooping in random places around the house (that was a subplot in the “Cats” movie that was cut, btw), and we can’t figure out why. He refuses to tell us his demands! Current theory: the cat litter is half a millimeter too high. Or he doesn’t like my quarantine hair. I’ll get back to you on this once I have a more definitive answer.

When starting a story, ask yourself, “What’s different this time?” For some reason, hearing that from a screenwriting friend resonated with me better than terms like “what’s the inciting event” or other terms they use for that sort of thing.

4- Did your previous experience as an editor help or hurt you when writing your book, and it what ways?

How it’s helped: I was a magazine editor (and writer), and punching up ledes was good practice for planning how to start a new chapter or section. In journalism and fiction, I like trying to come up with compelling first lines.

How it’s hurt: AP style is burned into my brain, but I’ve grown to tolerate the serial comma and the spelled-out number over ten. I don’t LIKE it, but I can tolerate it…

5- Would you share a picture with us of your book enjoying this summer? 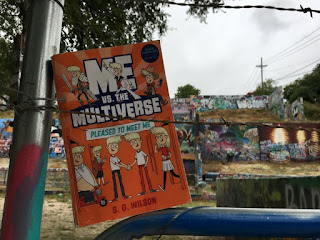 6- Why, do you suppose, there aren't more books with multiverse storylines?

Yeah, what are people thinking?! People love multiverse stories even when they don’t realize it. TV doesn’t keep showing “It’s a Wonderful Life” because of the Norman Rockwell-ness of it all, they show it because Darkest-Timeline Bedford Falls is an amazing hellhole.

Maybe the multiverse is still a new thing for a lot of people. My dentist didn’t know what I was talking about when he asked about my book. Even after he got his fingers out of my mouth so I could explain better, he was still perplexed. And just the other day an acquaintance with whom I was having a masked conversation said something like, “Multiverse, huh? Do have a degree in science?” I said, “Uh, no, I just read a lot of comics growing up. And watched Star Trek.”

I like @bellesmiddlegrade. She never goes overboard with crazy props and the like—just focuses on bringing out the special in every cover.

When I was a high school freshman, we were supposed to show up to school one morning, pile into a bus and go to the state basketball championship. I didn’t care a lick about basketball and dreaded riding a bus with pumped-up teens. So I opted to play hooky and spent the day reading the first three books of Robert Asprin’s “Myth Adventures” series and eating Hostess products. They’re not the best books per se (not the best junk food either), but definitely my all-time BEST READING EXPERIENCE EVER. Every time I break open a book I want to recreate that moment.

Congrats! Let’s see, ten years ago was about the time that I, in the face of getting laid off, going through my most stressful phase as a stay-at-home dad, and probably other horrible things I’m blocking, decided to double down on my goal of publishing a novel. I still did journalism to make money, but fiction proved far more fulfilling over the course of the decade—and it still is!
In the next ten years, I’d love for the chance to publish other middle grade and YA stories I have in mind.

I want ME VS. THE MULTIVERSE to evoke laughs, thrills and chills in readers, but also self-awareness. Just as my main character has to accept all his multiverse counterparts, I’d love for readers to embrace the many different sides of themselves and be brave enough to become whoever they want to be.

I want to leave readers laughing, but also thinking a bit about the shifting nature of reality and identity.

I’ve always found useful stuff in the various “how-to-write” books I’ve read, but my fave writing book by far is a slim yellow volume a high school English teacher made us all get, Basic English Revisited. My edition has little caveman drawings throughout, carving commas from boulders and that sort of thing. I still sometimes flip through it just for the pictures, and then I’ll be reminded about stuff like how to use semicolons. Those little cavemen probably inspired the creation of one of the counterparts in my book, Caveman Me.

The first book I fell in love with and that got me hooked on reading was A Wizard of Earthsea. I can’t remember how much Ged’s race comes up in the story though, so instead, I’ll go with Colson Whitehead’s John Henry Days. He’s written more ambitious books (and I love them all), but John Henry Days’ take on tall tales and the freelance writing world through the prism of Black experience resonated with me quite a bit.

I was lucky enough to get an agent who was keen to get the book traditionally published, but it took a while. (Writing the first draft of ME VS. THE MULTIVERSE in second person didn’t help.) At one point I figured the book might get rejected, so I started the THIS WEEK IN THE MULTIVERSE podcast for all my leftover ideas. In the end, I lucked out again and got picked up by Random House Children’s Books. Plus, I’ve loved doing the podcast so much that I’ve kept at it!

I’ve shamelessly tried to rip off all sorts of comedic writers over the years, but my son has just informed me that my approach, in this book at least, blends Stuart Gibbs (Spy School) with Jeff Kinney (Diary of a Wimpy Kid). I’ll take that.

Have you ever thought up an alternate Earth and how it got that way? Or maybe an alternate-Earth version of somebody from our Earth? I’d love to hear about it!


When Meade Macon goes to Me Con, a gathering of his doubles from parallel Earths, the last thing he expects is to feel left out. After all, aren’t these “Mes” supposed to be just like him? As it turns out, his counterparts—more accomplished and all-around cooler than Meade—want nothing to do with an “average” Me like him. But when an evil-genius Me hatches a dastardly plan that imperils the multiverse and every Earth in it, only Meade and his rag-tag team of loser duplicates are willing to stop him.


Alternate versions of S.G. Wilson from parallel Earths have worked as an Olympic shufflepuck commentator (Earth 24), food taster for Emperor Justin Bieber (Earth 101), stage manager for an all-mime version of The Sound of Music on Broadway (Earth 3), and many others. This Earth’s S.G Wilson mostly just writes stuff in Austin, Texas, where he lives with his partner, kids and cats. He’s worked as a magazine writer and editor and hosts a podcast called This Week in the Multiverse.


My book's out Aug. 4 so it's #Giveaway time! Every entrant gets a postcard+zine AND a chance to WIN A COPY!
1. Think up an alternate Earth
2. DM it to me by Aug. 4
3) Crowd at my book launch votes for winner (feel free to attend but not required) https://t.co/TUNTERUCA4 #mglit pic.twitter.com/QCsOPdiY8o
— S.G. Wilson (@SGWilson_Earth1) July 27, 2020


Me vs. the Multiverse: Pleased to Meet Me by S.G. Wilson
Posted by J Lenni Dorner at 12:00 AM