Today I wanted to share a GORGEOUS cover reveal of Extracted by Sherry D. Ficklin and Tyler H. Jolley published by Spencer Hill Press! Don't forget to click on the bonus video link at the end of the post to see how this spectacular cover was made by Lisa Amowitz! 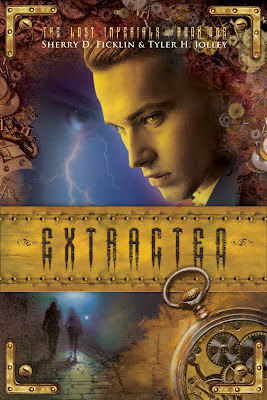 Extracted: The Lost Imperials (Book One)
Welcome to the war.
The Tesla Institute is a premier academy that trains young time travelers called Rifters. Created by Nicola Tesla, the Institute seeks special individuals who can help preserve the time stream against those who try to alter it.
The Hollows is a rogue band of Rifters who tear through time with little care for the consequences. Armed with their own group of lost teens--their only desire to find Tesla and put an end to his corruption of the time stream.
Torn between them are Lex and Ember, two Rifters with no memories of their life before joining the time war.
When Lex’s girlfriend dies during a mission, the only way he can save her is to retrieve the Dox, a piece of tech which allows Rifters to re-enter their own timeline without collapsing the time stream. But the Dox is hidden deep within the Telsa Institute, which means Lex must go into the enemy camp. It’s there he meets Ember, and the past that was stolen from them both comes flooding back.
Now armed with the truth of who they are, Lex and Ember must work together to save the future before the battle for time destroys them both…again.
Title: Extracted: The Lost Imperials (Book One)
Authors: Sherry D. Ficklin & Tyler H. Jolley
Publisher: Spencer Hill Press
******Click on the link below to see how this awesome cover was made

http://youtu.be/Dw_V-jzfH80
Have A Wonderful Weekend!
Angela
Author of Amarok Spencer Hill Press 11/2012
Posted by Angela Townsend at 7:50 AM

Lisa is so talented! I absolutely love her covers - this one is gorgeous!! Sounds like a great book though I'd buy it for the cover alone :)

Spencer Hill press has a great line up of awesome books. I can't wait to read this one and so many others. Lisa is very talented with her covers! I love the video also...

Thanks so mych for showing off the cover. Yeah, Lisa is amazing! I still just stare at it sometimes and I'm like, wow. That's MY book! lol.

Thanks for featuring this on OA, Katrina! Hi Hammy! (Michelle).