I'm proud to announce the upcoming birth of my debut novel,
DESCENDANT
book 1 in a Makai series
available December 16th, 2013 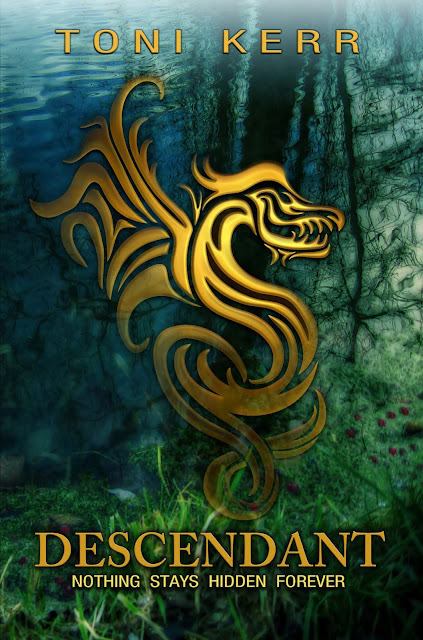 For 15 years, Tristan has done everything he can to bury the maddening thoughts of others—blaring music, isolation, the occasional painkiller. In the end, it was a small thing that pushed him over the edge—his mother hocked his iPod for a carton of cigarettes.

His suicide attempt would have succeeded if not for an old woman who claims dragon ancestry makes him the rightful guardian of a powerful emerald containing the soul of a Valkyrie. With the emerald stolen and the woman murdered, Tristan must survive on his own in a world he never knew existed to get the emerald back.

Shadowed by a secret society and guided by an avatar falcon, Tristan's escape from the murderer lands him on an uncharted island in the Pacific. When the murderer kidnaps the island's caretaker, a feisty young Druid priestess, Tristan discovers he'll risk anything to save her, unleashing powers he can't control.

Find me at Goodreads!
SQUEE!
Posted by Toni Kerr at 3:34 AM