Love Your Antagonist via Loki

So how many of you are going to see the new Thor movie this weekend?

Did you know that they added extra filming after it was finished, just to add more Loki scenes? There was such an outcry for the character (And Tom Hiddleston) that they added more of him to make the fans happy.

I admit, as much as I like Thor, I LOVED Loki. A good part of it was the actor. But also, the character himself. He is a villain with baggage. He's not evil, just for the sake of being evil. He found out he was adopted and not like everyone else. He was lied to. He lived under the shadow of his brother. And even though he was the antagonist, you felt for him. (And Tom's voice doesn't hurt either.) 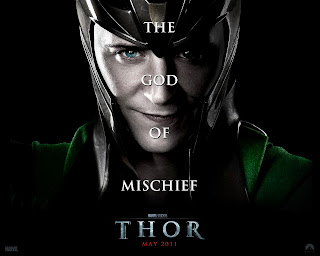 So I have a few questions for you. Ready?

1. Is your antagonist sympathetic? Can you see a reason that he/she is bad, or did you just make them bad/evil?

2.  Who are your favorite sympathetic villains. Books. Movies. I don't care.

Here is something to tide you over while you wait for the movie to come out:

Posted by Kristal Shaff at 8:07 AM