Today I wanted to put a plug in for one of my fellow authors from Month9 Books. 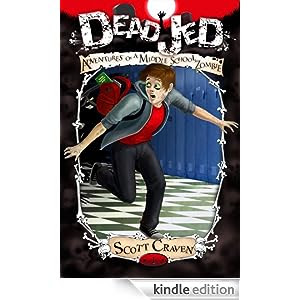 Jed is not your typical middle school geek. He is, to use the politically correct term, "cardiovascularly challenged." And though his parents attempted to shield him from the implications of being different for as long as they could, when Jed was eight and at a friend's sister's birthday party, he blew his lips off onto the cake in front of everyone, finally prompting the Big Talk—and an emergency SuperGlue repair by his dad. Now as a target of Robbie, the supreme school bully, and his pack of moronic toadies, seventh grade at Pine Hollow Junior High is rapidly becoming unbearable. From being stuffed in a trash can as "dead meat" and into a trophy case as the bully's "prize," to literally having his hand pulled off in the boys' room and a cigarette put in it to try to frame him for the recent reports of smoking in the school, Jed's had enough and is ready to plan his revenge. (Jed's always losing body parts, but luckily, with a good stapler and some duct tape, he's back in action.) But Jed finds that it's awesome what you can do when you're already dead! He goes from underground underdog to over-the-top hero and proves you don't have to be living to have a lot of heart. For every kid who's ever felt different, been picked on, or kicked out, this is a heartwarming and funny story about surviving middle school, making friends, and keeping your limbs.


And here is the new book trailer for Dead Jed.