I interviewed Nikki Loftin a couple years ago on my blog, The Writer Librarian, and I was excited to learn that she has a new book out. I also learned that she knows Operation Awesome's own Kell Andrews! 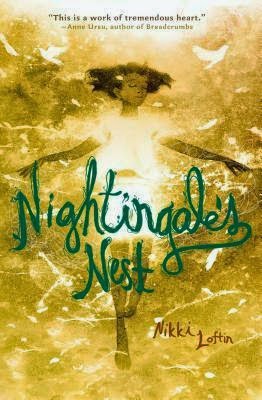 Twelve-year-old John Fischer Jr., or "Little John" as he’s always been known, is spending his summer helping his father with his tree removal business, clearing brush for Mr. King, the wealthy owner of a chain of Texas dollar stores, when he hears a beautiful song that transfixes him. He follows the melody and finds, not a bird, but a young girl sitting in the branches of a tall sycamore tree.

There’s something magical about this girl, Gayle, especially her soaring singing voice, and Little John’s friendship with Gayle quickly becomes the one bright spot in his life, for his home is dominated by sorrow over his sister’s death and his parents’ ever-tightening financial difficulties.

But then Mr. King draws Little John into an impossible choice—forced to choose between his family’s survival and a betrayal of Gayle that puts her future in jeopardy.

Inspired by a Hans Christian Andersen story, Nightingale's Nest is an unforgettable novel about a boy with the weight of the world on his shoulders and a girl with the gift of healing in her voice.Source: Goodreads

I also gave Nikki a follow-up interview. Here are her answers to some of my questions:

Since our last interview, what have you learned about the writing business? Has anything changed since THE SINISTER SWEETNESS OF SPLENDID ACADEMY was published?

I have learned so, so much. Some of the lessons were amazing – how it feels to get fan mail, how validating a good review from a kid reader can make you feel, how much fun talking to readers about your own books can be -  and some were not so amazing. For instance, you never know “how your book is doing” even though everyone you see will ask you that constantly for the first six months. (They do not understand the way royalty statements come sporadically, twice a year. Heck, I’m not sure I understand it!) So, if your book isn’t on the New York Times list, even if it is doing well, it can be hard to feel successful.

But then that email from a reader who identified with your book comes in unexpectedly, and your day brightens. Then a librarian calls, wanting to know if you’ll Skype in with her class since they all loved your characters… and the whole world is sunshine and roses.

The most important thing I’ve learned is that I only have control over the writing, over the words going into the next book, and that’s where my focus has to be, in order to keep from going crazy with all the uncertainty in publishing!

Great advice. And I love the premise of NIGHTINGALE'S NEST. How did the characters develop while the story was being written?

Well, the story started as a picture book, years before the novel began taking shape. I lived with the idea of a girl who loved trees so much she climbed one to build a nest…and a boy who wanted to be her friend, but was too sacred to climb up.

When I realized I had a novel instead of a picture book, the drafting was a strangely organic process. The characters became real for me, and stayed that way.

Little John is a twelve year-old boy who has grown as tall and strong as a man in the past year – but not soon enough to save his little sister, who fell to her death months before when he was unable to catch her. He’s working for his dad’s tree-trimming service the summer he meets Gayle, a strange eight year-old, tree-loving foster girl who seems to think she’s a bird.

At heart, they are the same two characters from the picture book… but of course, their stories are much deeper now, and more tragic.

Your characters are always so unique and wonderfully fleshed out--and I'm excited to learn more about John and Gayle. What do you find most rewarding, and most challenging about writing Middle Grade novels? Are there any other genres/age groups you've tried?

Ha! I tried writing adult romance novels before I ever thought about writing for kids. And I was terrible at it. I mean, truly awful. I wish I had given up sooner. I’d probably have another published kid’s book out by now!

I do write in some other genres: adult literary creative nonfiction and poetry, short stories and puppet plays for kids. But I think my best thing is writing middle grade novels. Everything about it is rewarding for me. I suspect I’m still about nine or ten years old, deep down, and I write for my own kid self, that little girl reader who knew there would never be enough books in the world to feed her appetite for stories. Writing middle grade feeds me.

The most challenging thing about writing for this age? Well, it’s a tightrope for me. I want to write exciting books, but also important ones, and some of the themes I address can seem to the gatekeepers (parents, librarians, teachers) to be “too hard” or “too dark” for middle grade kids. All I can do is hope that there are enough gatekeepers in the world who see kids as humans, with complex lives and a need to read books to help them understand and navigate the good and the bad they face. I know I needed those books when I was young, and I hope the readers who need my books will find them.

I completely agree. And I know your readers will find you! What are some of your current projects?

I am just about to finish my edits on my next book, WISH GIRL. It’s about a boy who moves to the countryside, near a valley that seems utterly magical. He meets a smart, bossy girl who may or may not make wishes come true…and also may need him to help her stay alive.

I think readers who enjoy Nightingale’s Nest will love this one. It’s not a fairy-tale retelling, but it’s full of magic and danger and a pinch of tragedy, too.

Thanks, Nikki! To get your own copy of Nightingale's Nest, you can click the link below: