Do you ever look back on yourself from the early days of your writing journey and just think, "Aww... I didn't know a thing back then!"
I remember when I first decided that I would make a real effort towards getting my work published. I knew it would be important to have other people read my book and give me feedback, but I had no writer friends at the time. So I put out an open call on Facebook, and sent it off to a few friends, my little sister, and my grandmother. Grandma, who pretty much only reads mysteries, never made it past the first chapter of my New Adult contemporary. 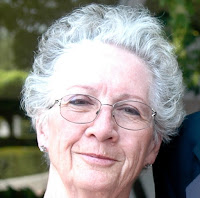 This is my grandma. I will love her forever for introducing me to Agatha Christie. If you need a beta reader for a cozy mystery, she's your woman.

The feedback from most of my friends was "This is really great! It's like a real book!" You can imagine what that did for the ole ego.
So, like the overeager fool I was, I started querying. Fortunately, I also got involved in the writing community on Twitter, and discovered the importance of having both critique partners and beta readers.
A critique partner is exactly what it sounds like: a partner. Usually there is an exchange of work. Critique partners are people who write and are familiar with the publishing industry. You don't feel guilty about nagging them over and over about your first paragraph because they get it.
But what about a beta reader?
As the "beta" part implies, a beta reader is not your first pass reader. A beta reader should be reading the most polished version of your manuscript, one that has been edited several times and already been seen by your critique partners. Don't waste your beta readers on picking up typos (though I always tell mine to mark it if one jumps out at them). Have them read your manuscript as if it were a book they picked up off the shelf.
Find beta readers with expertise in the areas of your book that stretch you, and have them help you make those scenes more realistic. For example, my sister is in her fourth year of vet school, so she helped me immensely with the vet clinic scenes in the book I'm currently querying. The book I'm working on right now is set in the area of upstate NY where I went to elementary school. I don't know what it's like to live there as an adult. So when I'm done, I'll reach out to one of my friends from elementary school on Facebook and ask her to evaluate that aspect of the book. Beta readers are great tools for developing diversity in your work as well. Be bold! Write that character with a different race, sexual orientation, or socioeconomic status than your own! Then have a beta reader (or two!) from that group help you with accuracy and sensitivity.
Beta readers are a valuable tool in the editing process. When you receive feedback from one, thank them graciously. And don't forget to include them in the acknowledgements when you finally get published!

After I initially wrote this post, I read an article in the October 2015 issue of Writer's Digest on beta readers. It's by Amy Sue Nathan, and it really goes in-depth on the topic of finding and keeping beta readers. I'd really recommend it to anyone interested in learning more!
Posted by Kara Reynolds at 6:00 AM