Thank you to everyone who participated in this week's contest. We had a couple Operatives join us (Wendy and Kara), so thanks for participating, guys. :) And the rest of you--well done! I enjoyed reading everybody's entries again, and I hope you enjoyed writing something for us. 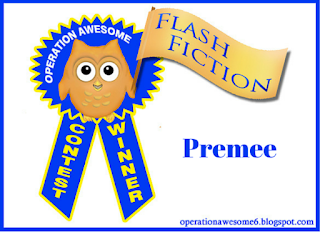 "The Management Trip" by Premee

And he fell out of a clear blue sky, thought Marcus. That’s what they'll say later. Why, it's like the start of 'The Satanic Verses.' But I don't suppose I'll transform on the way down.

He didn't, and hit the water with a slap, face-first. Through the confusion of bubbles in his wake, he dimly saw the fireball continue uninterrupted on its trajectory, as if the Cessna had been a bubble. The bisected plane, meanwhile, dove smoothly through the crystalline water, and vanished.

A heavy, scarlet sunset greeted him as he broke the surface and clumsily paddled to a nearby atoll. He watched the stars emerge, shivering, wondering whether the body of the pilot - whose name, he now ashamedly realized, he hadn’t even asked - or one of the other managers might wash up right at his feet. The thing, whatever had hit them, faded into a tiny blue flash far on the horizon. Russian missile? Errant weather satellite? Meteor? Or was it meteorite. He couldn’t remember, but eventually roused himself and - dredging up rusty memories of shipwreck books - managed to get a fire started. I suppose they'll find me tomorrow. What a story for the girls at the office! How his wife would clutch him and sob and then laugh herself sick, that she had stayed at the hotel while they went on their la-di-da island-hopping trip.

Fancy that thing hitting his seat instead of the row behind him. He would have been sliced clean in half, he thought. Whoosh! Like that fellow in the market chopping papayas with his machete. The seeds shining and round as buckshot.

Half-asleep under a handful of banana leaves, he woke to a sweet, high hum from far out to sea. He sat up and pushed his leaf blanket into the fire, brightening the feeble glow. "Hello?" he called.

Down the beach, a golden light glimmered, the ordinary glow - it seemed - of a flashlight. Rescue! He piled the rest of the leaves into the fire and ran, waving his arms. "Hello! Hello! I'm over here! I'm not hurt!"

But as he trotted down the slope towards his rescuer, he saw that the light was coming from beneath the surface - as if someone had dropped a huge candelabra that inexplicably burned on, Liberace, wishing his brother George were there, beneath the Paciferace. Marcus froze as other lights became visible - blue, green, gold. Something that looked like tentacles - no, could not be - spiralled up, symmetrical and hypnotic. As they rose he saw that they were precisely that, wrinkled, glowing hawsers, reaching to a sky he now saw was equally tentacled, equally alight, shining through a great rent in the precise line of the fireball’s flight. The hum grew in power and pitch until he collapsed to the sand, hands over his ears.

And so it was that Marcus B. Collins, Logistics Manager, became the first witness to the end of the world.

Thanks for sharing your story with us, Premee (is that the name you want on your badge? let me know if you want it changed), and the next time you can win is December 18--although I haven't decided if I'm going to do one that week or skip it because of the holidays.

This week's contest was also inspired by my daughter, believe it or not.

I've been burning candles, and she's mesmerized by the fire. But of course, my husband and I can't just say, "Fire." We have to quote Pitbull. And now, so does she.

I hope to see everyone Friday, Oct. 16, for the next contest! I'm really excited about that one, which has nothing to do with my daughter, but instead, is themed around the upcoming holiday that will occur on the last day of this month.