Whoo! Happy new year! Goofy fiction and a speculative twist--you're after my heart, aren't you? 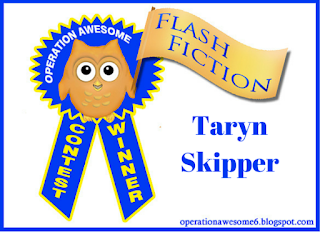 “I'll miss her fiercely,” Emiline lamented, her hand caressing the worn rivets along the tarnished brass hull of the once-magnificent landship.

“We have no choice,” Harrington reminded her. “She's served her purpose, fought a good fight, and now she's fetched a full purse.” Emiline was sentimental for a warrior, but Harrington had abandoned all but logic long ago.

“Not full for long,” Emiline countered, glancing toward a battered airship- the lone survivor of the First Defense. “This relic's overpriced. I understand it's not the merchants' war, but why must they lance our pockets so.” She crumpled to the sand, grieved by much more than prices and overwhelmed by the precipice upon which their clan's existence balanced.

Carmen rested a tiny hand on Emiline's armored shoulder. “You can do this Emi. You're the only one left in this hemisphere who can pilot an airship like this, and we've already paid dearly. Conrad would have wanted-”

“I know,” Emiline cut in, tears slipping down her resolute face. “I just need a moment to mourn. We've lost so much, and everything we've gained is because that landship held us together.”

Harrington signed the merchants' documents, finalizing the trade. Engineered to run with perfect efficiency utilizing minimal puffs of steam, the last working airship took to the sky, and Emiline's embodied memories shrunk below.

The landship was scrapped for parts long before the clan's Final Offensive ran the enemy into the heavens forever, but it sailed on immortal in the hearts of grateful generations.

Thank, everyone, for stopping by and reading!

We've got a ton of stuff coming up on the blog this month. #PassorPages entries are open tomorrow through Wednesday, so if you're querying a mystery/thriller and are brave enough to open yourself up to agent feedback, please enter! Our next #OAFlash Fiction contest is the 22nd to the 24th, and the following Monday will be the agents' feedback on the #PassorPages entries. Finally, on February 1st, several operatives will gab about our January #OABookClub book of the month--and it's not too late for you (YES, YOU!) to get started on Agatha Christie's The Murder of Roger Ackroyd to join in the conversation.

I really enjoyed the shorter 250 word stories this week. Whether or not you entered, what did you think? Let me know in the comments!
Posted by Unknown at 9:30 PM