Many thanks again to Julia Despain for being our guest host and judge this weekend!

Flash Fiction Contest #8 Prompt: It was the end of our summer trip. We looked so young, skinny, and kind of like hostages. 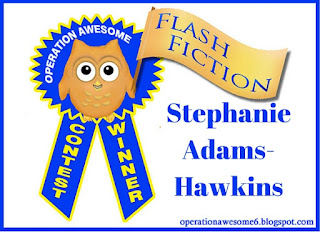 
It doesn’t snow in the south- you should know that before moving here. If snow does arrive, it’s a mere dusting that melts away by mid-morning so it can be slick as snot by noon.

It doesn’t snow as far south as Galveston though.
There are stories of snow in Galveston, and even of people freezing to death if you can imagine that. How does one freeze to death in Galveston, even pre global warming? Die of a blood born disease from mosquitoes? Sure. Die from humidity? Absolutely. Die from hurricane force winds and flooding? Perfectly feasible. But freezing? I mean, you’d really have to put your mind to it, right? There are so many easier ways to die here.

That’s how I ended up here looking at this over exposed picture I keep tucked away for these moments of self-loathing, my only companion to a recurring pity party. But I wasn’t going to let myself go there. It was the end of our summer trip. We looked so young, skinny, and kind of like hostages. We may as well have been- arrested by our optimism of what life was going to be like. We thought we’d always have those bodies; those natural sun-kissed highlights rather than the streaks of wiry gray hairs that worry our scalps these days. But it doesn’t snow in the south so I’ve got that going for me.

I don’t even know where those other girls are- somewhere floating in the Facebook ether, deciding whether to send that friend request because maybe thirty years is too soon. Well, except for Audrey. She didn’t make it out of this picture. No matter what happened in the hours after this pic was taken, my last and enduring memory of her is like this- stuck in this pose, forever twenty, never having to pull the loosening skin from her eyes to try and find the face that looked into the camera that day.

I can’t find her anymore, that younger, more optimistic me. I see Audrey on every corner, at every beach, and she’s exactly the same- she’s actually as she looks in this picture. There’s a causeway that stretches from the island to the mainland, attaching Galveston to Texas. A beach in Texas has always sounded like a non-sequitur to me. Boots and beaches just don’t seem to go together despite what all those country songs try and say. But they don’t wear boots on Galveston, they wear island casual attire if they’re going somewhere important, and as little as possible if they’re going anywhere else. You can certainly die in anything you want. The dress code isn’t prohibitive to anywhere you’d like to go.

But there are cold spots that you walk through and can’t shake. These are the places where Audrey lives now, where I’ve condemned her to spend her posthumous existence- at least until I die. I’m sure her parents see her differently and let her memory live on more dignified up north where it snows enough for Bing Crosby to convince you that a white Christmas is more than wishful thinking. No, her parents would surely be dead by now, so her memory is left to me. I seriously doubt the other girls think of her at all, having been counseled to not dwell on the tragedies of that summer so very long ago. But I’ll stay here with her and miss another winter that has the decency to let you shiver and hug your coat around your shoulders. Besides, any semblance of winter allows me the only respite from a perpetual summer that holds me hostage in this faded picture. Freezing wouldn’t be such an embarrassing death after all.


***
This week is our Pass or Pages feedback reveals! Stop by every day to pick up tips on your query letter and get to know our agent judges' individual tastes!
Posted by Unknown at 5:05 PM