It was a tough choice this week. Each entry was emotion-laden, but I had to go with the one that was most visceral. 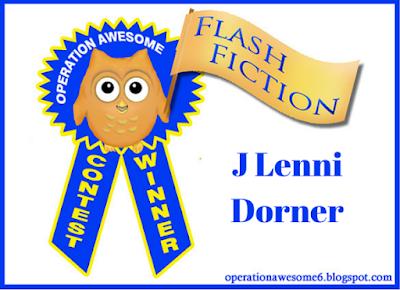 The smell of burnt cedar and sweaty armpits wafts up my nose as Dixon grabs me from behind.

"Look who it is. How you doing, Shallow Throat?" His cronies all laugh. That's it, yuck it up, inhale his obnoxious odor. Six bottles of cologne but not one swipe of antiperspirant. I'm almost glad when he chokes me. Inhaling his scent is the worse assault. Getting lifted by my neck and pinned to the wall is practically salvation.

I shut my eyes as his taunts continue. Spit from him and his followers mixes with the beads of sweat on my forehead. Pretending to be deaf isn't enough to satisfy today. Dixon drops me, hard. He shoves me down while two of the other boys kick out my legs. I look up in anticipation of what horror will come next. I wonder how much he enjoyed pissing on me yesterday?

"You know, I bet I can guess what Shallow Throat would like." He sneers. His friends chuckle, eager for the joke. Dixon turns around. His friends hold me in place. "A tasty treat for you." He farts in my face.

There is a smell worse than his cologne and armpit stink. I'm not crying. I'm not. But my eyes are cracks in the dam. They celebrate the victory and play rock-paper-scissors to determine who will feed me a fart next.

"What's going on here?" I hear his voice. The tears turn from leaks to a stream. I don't want him to see me like this. For the first time in months, I struggle against the bullies' hold.

Heath lifts the bully. There's no need for a wall. Rippling muscles that no fifteen-year-old should have easily hold Dixon in mid-air.

"You all right, Caleb?" He knows my name. I don't answer at first. I just want to hear him say it again. He offers me his other hand. My little mitt disappears in his great paw as he helps me to my feet. Heath runs his fingers through my hair, stopping my heart.

Dixon's friends whisper. Heath glares at them and snarls. Did I imagine that? He's showing his teeth. It's raw, it's uncivilized... it's breaking the zipper in my pants. He throws Dixon into them.

"You're gay!" Dixon shouts as he rubs his throat.

Heath's left cheek lifts, a sexy half smile forming. "Gay. And I stole two of your girlfriends. In fact, I was just on my way to pick Miranda up. I'll tell her you said hi."

No one knows what to say to this. It's nice to see the bullies silent.

I wish I knew what to say. Maybe if he hadn't seen me on my knees eating farts...

Dixon curses at Heath and threatens me.

"I'm Caleb's guardian angel now. Whatever you do to him, I'll do ten times worse to you."

This was tough to read, but that was the reason I picked it. I could feel the pain of the protagonist along with him and the relief that followed. It toed the line of my PG-13 rating, but the immediacy of the scene is the reason I had to pick it.

Thanks for reading, and I'll see you again in a couple weeks!
Posted by Unknown at 9:30 PM

Yay! Thank you so much. I really needed a win today. #WriterRockBottom
<3

Congratulations! The characterisation and development is really strong here - it's a great story. Thanks for posting this, a top read. :)

Congrats on your win. What a raw, emotional piece of writing. I could feel every bit of the protagonist's pain, embarrassment, shame and ultimate, small triumph at the end. I felt him being bullied and wanted to step in. You really did an excellent job of putting the readers in the scene. You deserved the win.

Thanks so much! I'm glad you enjoyed it.