Good stories, guys! Sorry for the delay in posting this, but here it is, our winner of lucky number 13... 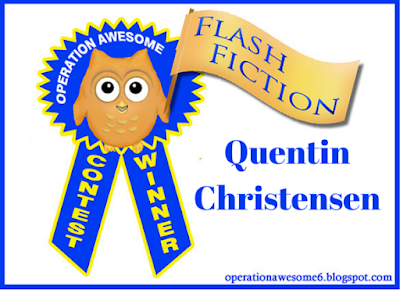 "A zombie? In space? That's the most ridiculous thing I've ever heard!" McGregor was not one to believe in anything that hadn't had at least three articles in "Nature" and a space shuttle mission about. Until this conversation, he thought Peterson was similarly sensible.

"How exactly would one become a zombie, in space?" Asked McGregor, not quite believing his own question.

"Being bitten or scratched before take-off."

"That would be picked up in the pre-flight quarantine".

"Maybe it has a long, symptomless incubation period."

"Only if they knew what to look for."

"So, you're telling me there’s a zombie colony living quietly on earth, and the first person they bite is an astronaut?"

“A pathogen floating in space?"

"That happens to float into a torn space suit? Preposterous!"

Before they could continue the argument, there was a banging on the window. The space station window. Jones couldn’t be alive. Two hours ago during a spacewalk, the robotic arm fell, slicing Jones and his suit, shoulder to hip before hitting the airlock, blocking it and preventing a rescue. Now he was moving, purposefully, trying to get back inside himself.

Zombies in space. Love it.
Posted by Unknown at 5:00 AM