Thanks for stopping by to read the winning entry! 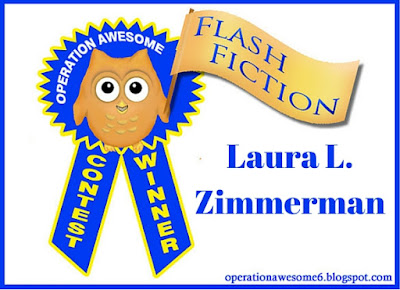 I pulled at the silky threads that clung to the walls of the cave. “Spider webs.” My nose crinkled in disgust.

Lydia giggled but kept her flashlight in the shadows. She was tall for twelve. It made her easier to spot, though, as the light bounced off the walls. Was the passageway getting smaller? My throat closed.

Why did we need silence just to look for buried treasure? It’s not like we’d scare it away. But I kept my mouth shut.

Something skittered to my left, and my head swung around, eyes wide.

“Don’t fall behind, Corban. The ghost of François Aregnaudeau might get you.” Lydia giggled once more.

“Tell me who this François guy was again? Something to do with horse-hair?”

“Honestly, don’t you listen? I already told you everything on our hike to the cave. He was a corsairs, which is French for privateer… but many went rogue and became pirates. In 1811 he arrived in New York with a boatload of loot, which the U.S. government immediately took –“

“Or so they say,” Jimmy cut in. “My great-grand-pops kept the map his grandpa gave him when he was a kid. It’s bona fide authentic, I tell you. We follow this, and we’ll find the treasure of Captain François. Or the part the government didn’t take.”

My hand fell through another doorway of silk and I jumped. “Sure wish we’d hurry up.”

“Hey! There’s a fork up ahead!” Lydia whisper-yelled, before I could get snarky with Jimmy. “We go left, then it’s in a ditch to the right.” The light flipped up to the narrow passage that jutted to the west. My heart skipped a beat.

“This is it,” Jimmy whispered.

We slowly moved forward, the group tightly knit, each breath labored with excitement. Around the corner, Jimmy fell to his knees before I even spotted the hole in the ground.

“I’ve got something!” he exclaimed.

Lydia aimed her flashlight low, the rest of us hidden in darkness. Anything could be behind us. A shiver ran down my spine. “What is it?”

A small wooden box that cracked open with resistance, then a woven cloth of some sort. Inside, a ceramic doll.

“What –“ Jimmy and I looked at one another, our brows pulled together.

The treasure was a doll?

“Oy!” I yelled, as Jimmy tossed the thing to the floor.

It broke into a million pieces, but there was something there, another paper. He picked it up, Lydia quick with her light. Her lips moved as she read the French under her breath. She swallowed hard, her gaze on ours.

Her shoulders straightened and a smile tugged at her lips. “The treasure isn’t here. We’ve got a little farther to go.

Our next flash contest is in two weeks--tell your friends. :D
Posted by Unknown at 9:30 PM