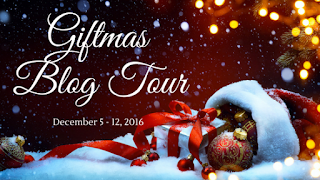 Happy Giftmas! We here at Operation Awesome are excited to be participating again in Rhonda Parrish's Giftmas blog tour. This year the blog tour is benefitting the Edmonton Food Bank. Today's guest post is brought to you by Tiffany Michelle Brown!

A Place at the Table

My fiance has explained repeatedly that he comes from a food family, but I don’t think that fact truly sunk in until the coolers from California arrived. When Bryan and I moved in together a couple years ago, his parents scheduled a visit to Phoenix. We’d only been in the tri-level apartment a few days, so our lives were still tightly packed in cardboard boxes and our refrigerator contained around 50 styles of hot sauce, but very little food.

“Should we go grocery shopping?” I asked. “We don’t really have anything.”

“No, we won’t need to shop any time soon,” Bryan answered.

And he was right. Because moments after hugs and hellos were exchanged, Bryan’s mom started unloading two huge coolers of food that had traveled the nine-hour drive with them. Within minutes, our freezer and fridge were completely stocked with foods I’d never heard of before—mushroom balls, shao bing, bean curd skins, and scallion pancakes.

The next day, Bryan’s mom sat at a fold-out card table for nearly an hour hand-rolling spinach and tofu dumplings. When she’d filled two large cookie sheets, the little pockets of heaven were deposited in the freezer, but she said she still had dumpling wrappers and filling left over, so she’d continue the next day. It took us nearly a year to make our way through all of those dumplings, because her beautiful, cooking-weathered hands crafted so many of them.

When Bryan and I first started dating, a whole new world of food opened up to me. Since his father is Cantonese and his mother is Shanghainese (very important distinctions, by the way), I got a crash course in traditional Asian food and knew immediately that my days of eating Pei Wei and P.F. Chang’s were over. Honestly, now that I’ve been properly educated, those chain restaurants seem like imposters. If chicken feet or traditional ramen or fish sauce aren’t on the menu, I don’t want to eat there. (And yes, I’ve eaten chicken feet; there’s photographic proof.)

Now, when Bryan and I go to Ranch Market on the weekends to pick up jackfruit or Enoki mushroom or mochi, I’m excited, because odds are good that the lady who makes Taiwanese pancakes will be there, her cart steaming and giving off the aromas of pancake batter, coconut, vanilla custard, and red bean. I burn my mouth every single time on the hot filling, but it’s totally worth it.

On the birthdays of friends and family members, Bryan and I always make sure to eat noodles together, because noodles symbolize long life in Chinese culture. Recently, we’ve started bringing home noodles for our dogs, too, so they can partake in our birthday tradition.

And I love celebrating moon festivals, because there is always moon cake. And even more exciting than the prospect of buttery cake filled with pineapple or melon or mung bean are the ancient stories that accompany the tradition of eating moon cake.

One of my favorite stories is one that dates back to the Yuan Dynasty (1271–1368 AD), a time of difficult, oppressive government and a resulting zeal for revolt. An uprising of the people was imminent, but it was difficult to pass messages between the resistance forces. Naturally, the Chinese came up with an ingenious solution…that involved food. Members of the resistance would hide messages in cakes, because what could possibly be threatening about a delivery of pastry? For added security, the rebels would read the messages by the light of the full moon, which is why full moons and new moons are celebrated in Chinese culture with—it all makes sense now!—moon cakes.

A couple years ago, I found out that Bryan hadn’t been home to Lancaster for Christmas in about six or seven years.

“It’s time,” I told him and we packed up our suitcases and drove out to California for 10 days.

I found out that we’d be enjoying a traditional hot pot for Christmas dinner. A hot pot is kind of like eating fondue—but way better. Vegetable, beef, or chicken broth simmers in a pot in the middle of the table and everyone adds meat, veggies, seafood, wontons, dumplings, and more. As your food cooks, it absorbs all of the flavors of what has been cooked before, plus the flavor of the broth. And there’s customized dipping sauce, too. It’s a hearty, satisfying, interactive umami explosion.

That Christmas, I went crazy over thinly-sliced Korean beef, which was both delicate and decadent. I tried pork kidney and didn’t completely hate it. I gorged myself on fresh vegetables. And my mouth was burning from the spicy dipping sauce I’d made myself.

But my favorite moment of dinner was something that Bryan’s dad said. Bryan’s parents—and Bryan, too, for that matter—are really happy that I’m an adventurous eater. They understand that I won’t necessarily like everything, but that I’m game to try it. And it goes a lot deeper than having a daring personality or an insatiable inner fat kid.

Bryan’s dad believes that if people from different cultures could share a meal together—without judgment, without sneering at cultural food differences, with an openness and respect for each other—the world would be a better place.

Yeah, I’m a girl who can recognize a moment, and that was most definitely a moment. Over the steam of the hot pot, Bryan’s dad was acknowledging that despite our different backgrounds, cultures, and views of the world, we were the same.

And I think he’s right about the global impact of sharing food. Can you imagine dignitaries and presidents and world leaders sharing a hot pot? Personally, I love that mental image. Because for me, food is love. It comforts you, fills you up, and though we all prepare it (or show it) a little differently, it nourishes both our bodies and our souls. 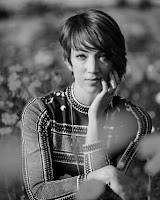 Tiffany Michelle Brown is a writer, Aikido practitioner, lover of puns, and whisky enthusiast with degrees in English and Creative Writing from the University of Arizona. Her fiction has been featured by Electric Spec, Popcorn Press, Romance Magazine, and Shooter Literary Magazine. She is one of four authors of the upcoming Enchanted series, which will be released by Pen and Kink Publishing in 2017. Tiffany lives in San Diego with her ninja fiancé and two fur balls, Biscuit and Zen. Follow her adventures at tiffanymichellebrown.wordpress.com.


Give It Back: A Horror Short

Check out the rest of the stops on the tour for more great stories! 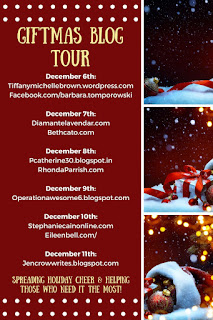 There's also a giveaway for you readers! Woohoo!

a Rafflecopter giveaway
Posted by Kara Reynolds at 6:00 AM

Email ThisBlogThis!Share to TwitterShare to FacebookShare to Pinterest
Labels: Giftmas