This is impossible to answer! I will give you some favorites at the moment, but they always change. “Clyde Bruckman’s Final Repose” is about an insurance salesman who can see the future; it gets high marks for Mulder/Scully banter, and it also has a rhythm and sensibility that made me love the show in general. “Monday” is X Files meets that movie Groundhog Day; it made such an impression on me and I have to watch it every few years. “Hollywood A.D.” and "Jose Chung's From Outer Space" are totally absurd and shows the writing room’s range. I also just rewatched “Beyond the Sea” at a friend’s suggestion and that is super duper emotional with a nice character inversion. I’m sorry I cheated. I know that was five episodes.

Today I went into a drug store and spent 20 minutes in the nail polish section, testing about a million colors so that by the end of it my nails looked like some bad Pollock interpretation. For every color I imagine a version of myself—what I’d be doing, who I’d be with, where I’d be headed etc. I know we’re only talking about nail polish here, but ultimately it’s an exercise about how to project myself into a reality that hasn’t happened, or to reminisce about a moment I’d like to relive again. And that’s what writing is like for me. With every character I take the time to imagine every reality for them I’m capable of imagining. At the end of the day I have to pick one, but I have that branching network of possibilities for each character—and at some point one of those branches intersects with another character’s branches and so on.

I was always a reader, but it wasn’t until I got to college and started reading Asian Am, Black, Latinx authors that I found the desire to tell a story. It had been so rare to see myself that intimately on the page. Reading from so many cultural viewpoints normalized the idea that my story was worth writing, and that maybe someone might connect with it.

4- How has social media helped you to promote your book?

I’m not sure it’s helped promote my book so much as put me in touch with a wonderful community. Of course I post pictures and information, and potential readers come find and support me (which by the way, thank you!!!!), but if anything it’s helped me plug in and meet people I couldn’t otherwise.

5- Have you ever been to Comic-Con or a sci-fi convention?

I went to SDCC when I was younger and it blew my mind. I’ve haven’t been to a comic con since. Definitely more to come!

My sister. We both grew up on a steady diet of scifi adventure and 80s action movies, and she really connected with the world building and formation of the EMPRESS characters. Lots of people tell me they connect with Aly’s voice but she has a soft spot for Rhee—while Rhee’s character is about loyalty and family, she otherwise staunchly refuses the expectations placed on her as a girl and public figure. And I think my sister might’ve connected with that?

I want them to feel empowered. So much of our lives we’re made to second-guess our choices. Am I wearing the right thing? Did I sound smart enough? Was that a waste of time? That’s not to say I don’t think self-reflection is important and necessary, but that we should take the opportunity to define ourselves and our stories. It takes a while sometimes to figure out who you are, but that's time you're entitled to—identity shouldn't be assigned to you by others.

8- Would you care to share a picture of your favorite or most prized pair of shoes?

HAHAH YES. Don’t they look like they’re from the Fifth Element or something? I don’t wear them nearly enough. 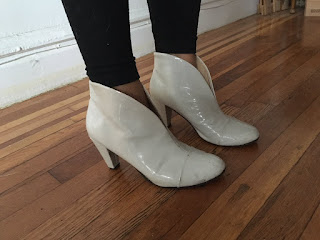 Aly has a nick in his eyebrow and I still haven’t figured out how he got it! Rhee practices martial arts and when she feels threatened, always imagines how she’d fight her way out if the scenario escalated.

10- Is there any diversity we can look forward to in your book?

Yes! Rhee is Native Kalusian; I based that culture off of my understanding of Asian and Pacific Islander traditions. Aly is black, from the planet of Wraeta.

11- Would you care to weigh in with your stand on the feminism, equalism, or humanism movements?

This could be a whole other blog post! I am an advocate of intersectional feminism and strive to fight for all groups of women, respecting and celebrating the many facets of society and ways to self identify. Basically, I’m a feminist who believes we need to lift the voices of queer women and women of color, among others.

12- As a reader, what most motivates you to buy a new book to read?

If I hear the politics are intricate, there’s great world building, and/or an irresistible voice—I will buy it. Oh also, a kick a$$ girl who can wield some sort of archaic weapon never hurt.

13- What advice would you give a minor who is being bullied?

There are safe spaces and people who want to support you. They exist. I know it sounds impossible and unfair that it’s on you to find them, but it will be worth it when you do. Please do not give up.

The option to publish traditionally was available, and I gladly took the opportunity! Ultimately my publisher thought the book was viable enough that people might buy it and read it, but not all of my writing fits into that category. I have no doubt there will be things I will self publish, and projects that will better suit smaller presses!

15- Anything else you would care to share about your book and yourself?

Rhoda Belleza was raised in Los Angeles, where she grew up writing XFiles fanfiction and stuffing her face with avocados. When she's not writing, Rhoda obsesses over nail art tutorials, watches kung fu movies, and sews together crooked things that pass for clothes. She's a children's editor at a publishing house and writes from a sunny Brooklyn apartment stuffed far too many bikes and far too many shoes. Empress of a Thousand Skies is her debut novel. Follow her on Twitter at @rhodabee