I'm currently reading READY PLAYER ONE, and so far I am loving it. One thing in particular that I love is that the main character, Wade, frequently makes mistakes that drive the plot forward and reveal more about his inner self.

Several years ago, I was in a community theater production of Brigadoon. We needed a trunk for the Jeannie's Packing Up scene, and my husband had an old one that didn't look too terribly anachronistic from far away, so I emptied it out and moved it to the theater for the run of the show.

One day, I came in and found a groovy pair of hipster glasses (sans lenses) in the trunk. They didn't belong to anyone in the cast, so I made a game of hiding them onstage every show, and eventually took them home on Closing Night. 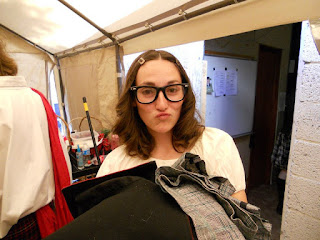 How could I NOT keep those bad boys?

Anyhoo, during the cast party I got a phone call from one of the guys in the improv company that had their shows right after ours in the same theater. Apparently, the glasses were his, and he needed them back ASAP for one of his sketches.

In taking the glasses, I had made a MISTAKE. I left the cast party immediately and took the glasses back to the theater.

Both the fact that I returned the glasses immediately and didn't give Improv Guy grief for using my trunk to store his props without permission reveal something about my character. And if it were a novel and not real life, fixing my mistake would have been useful to propel the plot along, by getting me out of the cast party before it got interrupted by a robbery, or having something awful happen to me on the drive home, or having a meet-cute with Improv Guy. (None of those things happened in real life. This is why fiction is so much better.)

Mistakes and their ramifications can serve a myriad of purposes in a novel. Let go of the idea that your characters have to be perfect, and allow them to make mistakes.

Last chance for a query letter critique in 2016! If you want one, please comment on this post and let me know. I'll select a few people for critiques. Make sure you come back and check for my reply so you know if you were chosen.

Email ThisBlogThis!Share to TwitterShare to FacebookShare to Pinterest
Labels: Kara, the muse