The other day, I sat down to work on my revisions for my YA fantasy. In my last post for Operation Awesome, I talked about being too tired during the week to be able to even think about writing, so I was pretty excited that I had the time and energy to write on Saturday. There I was, clacking away at my keyboard, when I stumbled across something that seemed a simple question:


It's 5:00 in the morning on a trail through the woods. How are the characters able to see and navigate?

Lantern? Nope, they just escaped a fight with bad guys in the woods; they wouldn't want to draw attention to themselves. Magic? No, there's not that kind of magic in this world. Night vision? Cool idea, but that could get overpowered very quickly. So how?

The next logical thought was, well, of course there's a moon and stars. But then I paused. See, I'm firmly in the camp of making fantasy worlds markedly different from our own, and what always annoys me is these fantasy worlds that have the same 24-hour day, the same single sun and moon, the same seasons and tides and all of the other things unique to our planet. So of course I thought to myself, Well, in this world, there are TWO moons.

Yet another thought that seemed so simple at the time. But three hours later, my eyes aching from having stared at my computer screen, I realized I was very deep in the rabbit hole of figuring out how to put together a binary moon system that perfectly cycles in a 360-day year and only has one shared new moon. 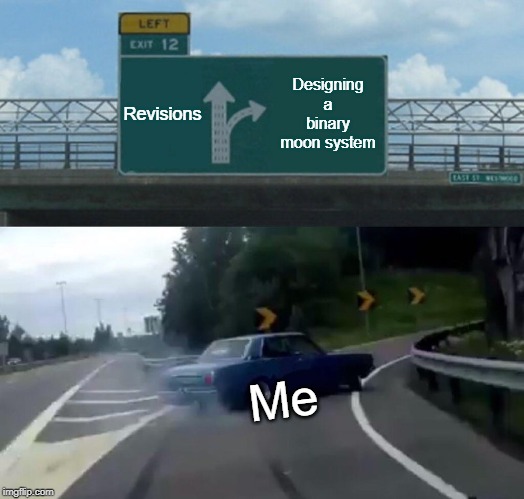 All the while as I was working on this, some voice of reason in the back of my head kept pleading with me to stop, to just work on the revisions like I'd intended, that the binary moons were cool but did not need this much thought. But I couldn't stop. This one extremely background detail had completely consumed me, and I needed to figure it out. And, after multiple days of thought, research, and Excel formulas, I came up with my system.

When I was done, I looked back on that time and felt extremely disappointed with myself. Rather than spending the weekend writing the entirely new chapter two I'd intended to work on, I messed around with sine curves. Instead of figuring out how to work in more of that side character who completely disappeared after chapter four, I read about lunar eclipses. I felt like I'd wasted the weekend.

But the thing is, I didn't waste it. Sure, at first it was an exercise in procrastination, but by the end of my deliberations, I had something to show for it. I had created a metric that I can now use to tell time in the world of the story, and to set the stage for a major world-specific event. It's hard to see this kind of stuff as you're in it, that the time you're "wasting" will actually be useful as you move forward with your writing.

So I'd encourage you to do these deep dives, to let your imagination or your sense of scientific propriety drive you where it may. You might resurface with a binary moon system.
Posted by Amren Ortega at 7:00 AM