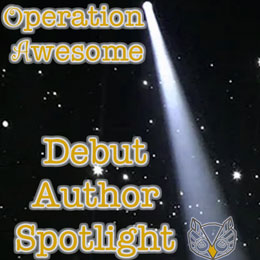 
We have a star of screen (Lost at Christmas) and now of page in our spotlight this week.


1- Overall, which character has gotten the most support?

Hello Operation Awesome! I think one of the things I aimed to do most in writing The Tick and The Tock of the Crocodile Clock is to create characters who are flawed! So our main character, Wendy, is likable but also there are times when she drives you crazy with her almost Hamlet like inability to do things rather than just think about what might go wrong if she tries. Cat – the Louise to Wendy’s Thelma – is compassionate and caring towards Wendy, but has a temper. Kevin, the book’s biggest villain, often frustratingly makes very sensible and good points. Freya, the mean girl who bullies our hero, is insecure and taken advantage of. I think the most support still goes to Wendy and Cat but this isn’t a book of good and evil or of heroes and villains, just people with all of their quirks and nuances.

Write what you know, but no one else does. I’m from Lewis and when I write about what it was like for me growing up people are fascinated because it’s unusual. Think about what makes you unique, and write about it.

3- What emotions do you hope your book will evoke for the reader?

4- What was it like staring in a holiday movie?

Ah! How do I sum this up! It was incredible, and it’s an incredible movie. It has everything I love the most: Scotland’s incredible scenery, people, culture and humour. Christmas spirit. Love. Loss. And an ending Hollywood would hate! The funniest thing about it is everyone keeps on saying things like “they’re meant to be cold and we can’t even see their breath! Why aren’t they cold?” and I’d like to take this opportunity to assure everyone that we were in Glencoe, in Winter, in the snow… we were FREEZING. If you can’t see our breath it’s probably because we’d become too cold to waste energy on breathing.
It's a good movie! And it’s got Sylvester McCoy in it, who played Doctor Who and Radagast the Brown. Check it out… after you read Croc Clock of course.

5- Would you share a picture with us of your book at a local bookshop?

Quick story about this picture: this is in the Baltic Bookshop in Stornoway. When I was a child I’d do a 60 mile round trip from my wee village to here, taking 6 buses, to buy books. I come from a very rural island. Seeing this in the window of the bookshop is absolutely mindblowing, I can’t even express it. 6- How do you support your fellow debut authors and have any of them supported you?

Firstly, I’ll happily share any tips or hints I may have with anyone who asks, I’m very much in favour of passing it forward and I hate it when people are successful and pull the ladder up. It’s not a zero sum game, you know? Other people’s success doesn’t dull yours!
As well as that I’m in chat groups with other 2022 debut authors and they are the most supportive group of people! We share advice, get each other through the hard times, celebrate the good times, retweet for each other, read each other’s books. It’s lovely.

7- Time to double-down on social media! What's your Twitter handle, and do you have two or three writer friends on there to shout-out to for #WriterWednesday ?
Also, can you please recommend a favorite #bookstagram account profile?

Twitter: @kennyiboyle Facebook and insta: KennyBoyleOfficial –
Shout outs, the first has to go to Liz Hyder @londonbessie who has given so much of her time and energy to helping me out and who’s own novel “The Gifts” is nothing short of SENSATIONAL. Secondly Kate S Martin @katemartin100 who is incredibly generous in her support of others and who’s book “Are You Okay, Eliot Hart” is just so so important and vibrant and, two for one, Claire Alexander @ClaireAWriter and Charlie Roy @dayinspace who are not only incredible writers but who were on my very first live writers panel with me and were wonderful.

8- What is your favorite creative non-writing activity to do?

As you know, I’m an actor as a full time job! I mostly do comedy, crowd pleasing, murder mystery or pantomime style stuff but every so often I like to do a really nice dramatic role you can sink your teeth right into. Acting is such a huge part of me, when I don’t act for a few weeks I start to get droopy like an unwatered house plant.

9- In what ways are the main characters in your book diverse? diversebooks.org #WeNeedDiverseBooks

Neurodiversity! I was diagnosed with social anxiety and depression in late 2019 and, unable to get any sort of therapy or professional care due to the pandemic hitting, Crocodile Clock was sort of my non-autobiographical way or dealing with what I had been going through my whole life, the impact of learning what those divergencies were called, and putting my feelings, good and bad, on paper. Wendy is non-neurotypical in the same ways as I am, and fictionalising my experiences gave me a lot of freedom to talk about my quirky brain. Cat is non-neurotypical in other ways that I personally am not, but I have had and have many friends who are. The book is fun, and funny, but at it’s heart there is a very serious mental health message. I’ve had one reader tell me that they let their daughter read the book to help them cope with, and better understand, losing someone in a similar way to something that happens in the book and knowing that the book can have that role means it’s all worth while.
As well as that I’m a writer from a tiny, rural, Scottish village with a population of fewer than 50. We have to fight extra hard to get noticed even within Scotland so getting a chance to have me voice heard around this world in this book is incredible.

10- What's the biggest writing goal you hope to accomplish in your lifetime? #WriteGoal #BucketList #WriterBucketList

Gang, for real, if Neil Gaiman or Nicola Sturgeon were to read and like my book I’d pretty much consider that mission accomplished on this whole writing thing.
A weird combo? Maybe. But they’re both heroes in different ways. 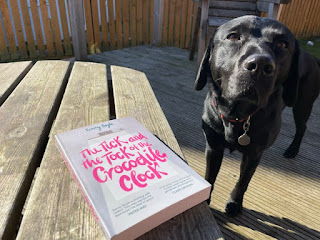 I was very lucky. I got picked up so quickly. I know that that is pure luck and that some people go for months, years, maybe even decades without finding a publisher. But that’s all it is: luck. Creative industries are so tough, and there is so much competition that not being signed by an agent or publisher isn’t a reflection of your talent, so much as a reflection of how hard it is to stand out among everything that comes across a person’s desk every day. If you want to find a trad publisher the only advice I have is not to give up. It sounds weak coming from me who had it easy, but decades of rejections as an actor before getting anywhere mean I do know how hard it can be, albeit in a different industry.
Here's a picture of my dog, Bramble, just to keep things exciting.

12- 🏳️‍🌈 June Bonus Question: Rainbow Book Month™ is a nationwide celebration of the authors of and novels including the LGBTQIA+ community. What author might you suggest reading to celebrate this month?

Ely Percy. Scottish author, award winning, and their books are all about the LGBTQIA+ community, of which they are a member. 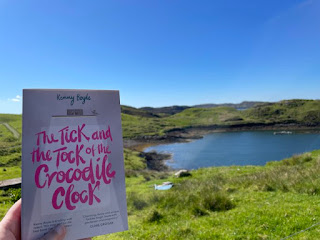 13- Would you please ask our audience an intriguing question to answer in the comments?

In The Tick and The Tock of the Crocodile Clock Wendy and Cat struggle between the need to get “proper” jobs to survive in a capitalist world, versus the need in their souls to make art. Do you think that art is stifled by having to be profitable? What kind of art would you make if you didn’t have to worry about how many people would pay for it?

14- Anything else you would care to share about your book and yourself?

I should tell you a bit about the book!
Here’s the blurb:
An aspiring writer from the Southside of Glasgow, Wendy is in a rut. She tries to brighten her call-centre job by shoehorning as many long words as possible into conversations with customers. But her manager isn’t amused by that and, after a public dressing-down, Wendy walks out.
Jobless and depressed, she finds consolation in a surprise friendship with another disgruntled ex-colleague, wild-child painter Cat, who encourages her to live more dangerously. It’s just what Wendy needs and it’s also brilliant for her creative juices. But a black cloud is about to overshadow this new-found liberation, as well as to put Wendy on the wrong side of the law. 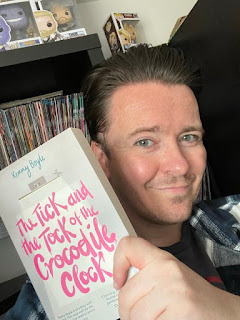 Fresh, insightful and funny, as well as unflinchingly honest about the tougher side of life, Kenny Boyle’s debut novel takes us deep into the psyche of a likeable misfit who treads a fine line between reality and fantasy – and just wants the world to see her true self.

And here’s a little bit about me:

I was born in Stornoway on the Isle of Lewis, and I trained as an actor at Royal Conservatoire of Scotland. I also hold a degree in English literature from Strathclyde University. I’m the star, alongside Natalie Clark, of Ryan Hendrick's multi-award winning short film Perfect Strangers (2015) and of the same director's feature-film version Lost at Christmas (2020). My plays include Playthrough and An Isolated Incident, my debut radio play The Knock of The Ban-sithe will be on BBC Radio 4 and BBC Sounds in August of this year and in 2021 I received a New Playwrights Award from the Playwrights’ Studio, Scotland. The Tick and the Tock of the Crocodile Clock is my debut novel.

The Tick and The Tock of the Crocodile Clock by Kenny Boyle
Posted by J Lenni Dorner at 12:45 AM