Across the Universe PRE-ORDER GIVEAWAY! - CLOSED

Update: erica and christy you won the drawing!


It was SO fun reading your awesome word inventions.

Thanks to everyone who entered!

Guess what comes out next Tuuuuessday! 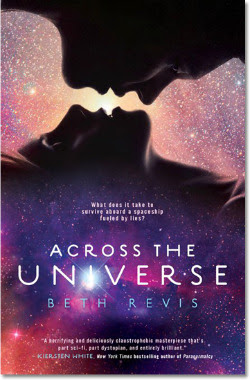 I know, right?
I'm dying! I've already pre-ordered my copy, but I was thinking about all those other times an amazing book came out and I just didn't get around to picking it up until much after it came out, and I didn't want that to happen to you guys.
So we're giving away one pre-order of Beth Revis' ACROSS THE UNIVERSE.
If you haven't gotten around to pre-ordering it yet, then this will be perfect timing for you! I'll pre-order tomorrow so there's a good chance it will arrive by Tuesday in the U.S. (no promises for outside the country, though, but still... a free book!)
All you've got to do to be included in this random drawing is this:
A) Follow us if you're not
B) In honor of the epic spaceship setting, turn your WORD VERIFICATION non-word into a science fiction term at the bottom of your post.
You can do this by leaving a comment, pressing POST COMMENT, and then EDIT your comment to include the WORDVER new definition. Don't forget to enter the word verification for the camera, too (you know, so our blog doesn't think you're a really clever robot).
Amparo will be blogging a review once it's out, so be sure to check back for that. And now for the juice of the book (for those of you who have missed all the ever-present buzz):

A love out of time. A spaceship built of secrets and murder.

Seventeen-year-old Amy joins her parents as frozen cargo aboard the vast spaceship Godspeed and expects to awaken on a new planet, three hundred years in the future. Never could she have known that her frozen slumber would come to an end fifty years too soon and that she would be thrust into the brave new world of a spaceship that lives by its own rules.

Amy quickly realizes that her awakening was no mere computer malfunction. Someone-one of the few thousand inhabitants of the spaceship-tried to kill her. And if Amy doesn't do something soon, her parents will be next.

Now Amy must race to unlock Godspeed's hidden secrets. But out of her list of murder suspects, there's only one who matters: Elder, the future leader of the ship and the love she could never have seen coming.