Today is the cover reveal for Georgia McBride's debut novel, Praefatio, coming next year to Month 9 Books. Run over to Mundie Mom's where you can hear more about the book and also see the awesome trailer. Also, visit Goodreads and add Praefatio to your "to read" list as well! 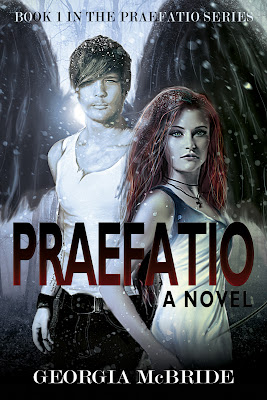 WHEN ALL YOU HAVE IS YOUR WORD, HOW DO YOU PROVE WHO YOU ARE?

Seventeen-year-old Grace Ann Miller is no ordinary runaway. After having been missing for weeks, Grace is found on the estate of international rock star Gavin Vault, half-dressed and yelling for help. Over the course of twenty-four hours Grace holds an entire police force captive with incredulous tales of angels, demons, and war; intent on saving Gavin from lockup, and her family from worry over her safety. But instead, authorities believe that Grace is ill, and suffering from Stockholm Syndrome, the victim of assault and a severely fractured mind. Undeterred, Grace reveals the secret existence of dark angels on earth, an ancient prophecy and a wretched curse steeped in Biblical myth. Grace’s claims set into motion an ages-old war, resulting in blood, death and the loss of everything that matters. But are these the delusions of an immensely sick girl, or could Grace’s story actually be true? Praefatio is Grace’s account of weeks on the run, falling in love and losing everything but her faith. When it’s sister against brother, light versus darkness, corrupt police officers, eager doctors and accusing journalists, against one girl with nothing but her word as proof: who do you believe?