I Am My Own Worst Enemy - Now A Proven Fact

I posted this a few months ago on another blog, but it is soooo apt right now it's not even funny. Actually, scratch that, given the original ending of this post, it's completely hilarious :-D Be sure to read that ending and the update, and try not to laugh too hard at me LOL

I knew when I got published that I'd be busy. I knew I'd have contracts and edits and deadlines - but I wasn't worried. I actually work better under a deadline. I was sort of looking forward to all the hustle and bustle.

However, I didn't take into account my own proclivity for procrastination.

See, I tend to look at my schedule and think, "Ooo, I have 2 months to write this book. Piece of cake. I'll get started on it later."

But here is what I forget. Writing that one book isn't the only thing I'm going to have to do in that two month time frame. I will have edits coming in on other books, promo to do for all my books (and I cannot stress enough how much TIME this stuff takes), blog posts to write, crits for friends to do, proposals for future projects to do...not to mention the million and one family and home issues that need Mommy's attention.

And I'm one of the extremely lucky ones that is able to do this full time. I love that I get to write. I feel so incredibly lucky that I get paid to do what I love. But I will say that once those contracts are signed, a lot of the wiggle room goes out the door. It doesn't really matter if I'm too tired or don't feel like writing on any particular day. If there is a deadline looming, I HAVE to get it done. Like it or not.

It's become a job. It's a job I love and I wouldn't change anything for the world. But I don't really get to do the "eh, I just don't feel like it" anymore - not without consequences anyway ;-) (Those consequences usually involve extreme stress and lack of sleep due to full-on cram sessions as I try to get things done - cram sessions that wouldn't be necessary if I'd learn to not procrastinate ...I'm working on it) :-D *ahem...see updated ending* 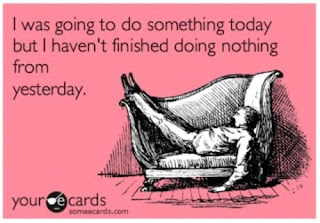 Now, it's not ALWAYS my fault. Sometimes I do really well sticking to my schedule and things come along that prevent me from working. Life happens. You gotta learn to roll with it. I'm learning to not over-commit, to say no every now and then, to limit some of the "non-writing" extras I used to do. It helps.

But I do have to admit that I am sort of easily distracted :-D I do okay most days. But my life would be a lot less stressful if I'd just get out of my own way and get to work ;-)

This recent FB conversation between my hubs and I pretty much sums up my usual work routine:

SPECIAL NOTE:
(This was the original ending to this post)
I'm starting a new book next week. I have two and a half months to get it done. I only need to do about 1500 words a day and I will be done early with several weeks to edit before it is due. Totally doable, piece of cake. THIS time I will not procrastinate ;-D 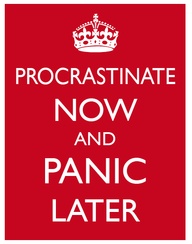 Update on that Ending:
Yeah, I procrastinated. *blush* but I'm totally chalking that up to extreme burnout :)

THEN, all the time I had sort of evaporated due to major edits being needed on another book and releasing book 2 of the Blood Blade Sisters series. Luckily, my current book got a few extensions. However, it is now due Monday. And really, my poor editor would love it before then if I can perform a miracle. See, I've changed some major plot points - twice - the most recent changes being made last night, and these changes resulted in major cuttage and necessary new chapters.

After all is said and done, I now need to write about 30k more to replace/update/and/or fix what I had. By Monday.....What's sad is I've done this before so I know I can pull it off. It's not going to be pretty though :-D I'd suggest staying upwind of me (and my house) until next week :-D

I solemnly vow to never procrastinate again :-) I will take into account the fact that my current WIPs are not the only things that will be going on in my life (writing and real) and that no matter how much time I think I have, I really have a lot less. I will do better with my time management and will try to stop making major changes days before my manuscripts are due.

In the meantime, if you need me, I'll be over in the corner in the fetal position crying into my laptop ;-)
Posted by Michelle McLean at 9:45 AM