Copyright laws and writing: Not the best combination

Today we're going to talk about music and writing and being inspired and then not being able to share that inspiration because of the big C: copyright laws. 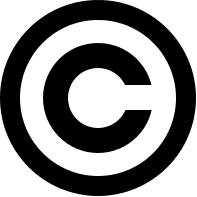 I know I'm not the only one who's ever been inspired by a song and written a scene around it, because I've seen writers galore over the past few years share their "writing playlists" and favorite songs and explain why this or that music lead them to write something that made a big difference to their story line. We, as creative beings, naturally find inspiration in music; in the rise and fall of our emotions as we go along for the lyrical ride and see the pictures in our mind's eye that the ride provides. Problem is, most of the time the very music that spurred us to new creative heights can never even be shared in our books, due to copyrights.*

First example: I've read a book on more than one occasion where a character referred to the classic Beatles birthday song as, "the Beatles birthday song" (I had to do this, myself, for If I Speak True). I'm going to be honest here. At first, I was annoyed. What the heck was "the Beatles birthday song"? Why not just share what they were talking about? But a little further into my writerly years, I figured it out. (Okay, actually, just recently, when my editor was like HEY YOU CAN'T SAY, they say it's your birthday -- that's copyrighted!**)

Example number two: The song everyone's sung about a thousand times before reaching adulthood? (Hint: The lyrics start like this: Happy birthday to you... Happy birthday to you...) That's copyrighted as well. Shocking, I know. And I guess there's a bit of a disagreement there. (Click here to read more about the song sisters Patty and Mildred Hill wrote in the late 1800's that's being challenged in Federal Court.)

So of course, with us being writers, we get all deep and try to find ways to refer to the song instead of flat-out quoting it, hoping our readers will understand. (Or is that just me?) But if we're wanting our books to be timeless (not all, of course are written to be so) and not easily dated, then there's got to be a better resolution to this problem.

My resolution was writing two songs myself, then clipping lines from them and throwing bits of those into the scenes.*** Will it resonate as well with the readers? I'm not sure, but I hope so.

How about you? Have you written your own songs in order to include those little "moments" in the story line? Listed the title and let the reader go from there? Have you ever been pulled from a story because a song was mentioned? We'd love to hear about it in the comments.

* I was going to share a copyright photo or image here, but all of the ones I found appeared to be under copyright. (The big C was from Wikipedia Commons.)

** For a great explanation of what is usable and considered "fair use" book-wise, check out this post on Jane Friedman's blog, by Brad Frazer; and the Creative Commons website.

*** According to one website, the moment you have officially "recorded" a song, it's already copyrighted. You have every right to then go online and file for a copyright of it. Anybody want to sing a little ditty for me? ;)
Posted by Jessica L. Brooks (coffeelvnmom) at 5:11 PM