Evolution of a Snowman

I've thought a lot about what to post today and tried to come up with some awesome writing post, but it's been a rough week. Not only was it the busiest and most stressful payroll in the history of all payrolls (I'm only sort of exaggerating here), but we found out some extremely disappointing news yesterday. So all I can come up with are negative things to write about, like how much waiting sucks, especially to have everything fall apart in the end over something totally stupid and completely out of my control, and how I really wish I could just hide from the world and write for a solid month, because it feels like I haven't written anything in forever, and how I need more hours in the day, and . . . yeah. So much negativity.

So I need some fluff. And this is one of my favorites. :)

Our family moved from Arizona to Idaho at the beginning of 2010. My kids hadn't had a lot of experience with snow at that point. As a result, they hadn't built many snowmen.

We'd come up in 2006 to visit family and that was my kids' first real experience with snow. This is their first snowman: 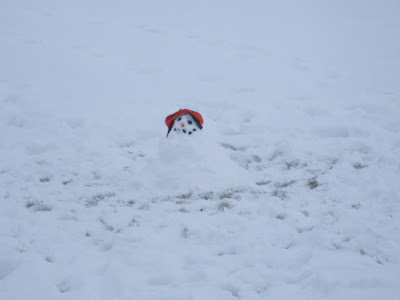 It wasn't really their fault this one turned out so sad since the snow didn't want to stick together, but still, he looked like he was already melting. Poor thing.

When we moved here, I thought the kids would be all excited to get out there and make some awesome snowmen, but apparently, it's cold outside when it snows, so they resisted. Then we had the great blizzard of Nov 2010 (not as blizzardy as they made it sound like it would be) and since we were on break, the kids finally attempted another snowman.

They worked on it for quite a while, so I thought for sure this one was going to be huge. I promised not to look until they were done. My patience was rewarded with this: 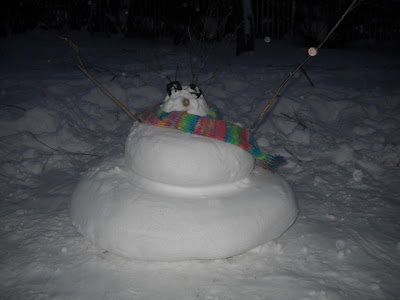 Not bad, though it looked more like a cake than a snowman. I'm sorry, snowwoman. And my daughter wasn't very happy with me when I started laughing. But it was so not what I was expecting and sometimes, the laughter just can't be controlled.

So when the response to snowman #1 was less than satisfactory, they set out the next day to make another one. This was the result: 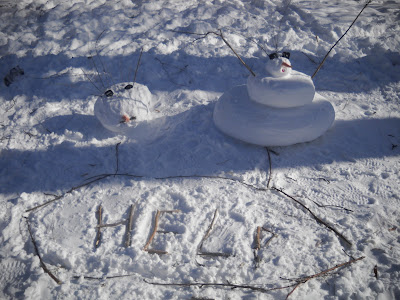 And so begins the tale of the girlfriend snowwoman and the boyfriend snowman, as told by my 11-year-old daughter. The boyfriend (on the left) had to go out for some reason in a terrible snowstorm. It was so bad it buried him up to his neck. His girlfriend went looking for him and when she found him, she ran in circles, waving her hands around, screaming, "Help! Help!" And when no one came to help, she made a sign. And she lost her scarf.

As far as I know, the only help they got was our Great Dane eating their noses. Apparently, he likes carrots.

Maybe, if I'm lucky, this winter I can convince them to create some awesome Calvin and Hobbes style snowmen. :)
Posted by Abby Annis at 1:51 PM