One of my original critique partners, Christina Mercer, started going to the UtopYA Con in Nashville a few years back, and raved about the experience. Which is why that con was the first one to come to mind when I decided earlier this year that I wanted to travel to a fun con as a debut author.

It took some planning (and more money than I anticipated) to be able to attend this year, and I'm so glad I did! UtopYA started with a focus on YA paranormal and fantasy books, and has evolved over its four-year lifetime. For 2016 and the fifth year, they're expanding the scope to include MG through Adult categories, in the paranormal, fantasy, and contemporary genres, with a name change to Utopia Con to reflect that it's not just YA any longer.

This is the most fan-based con I've ever gone to, and there was so much enthusiasm given to each and every author--we all joked that we're spoiled for other cons now, because we know what it's like to go to a great one. EVERYONE I interacted with was friendly and welcoming, and the creepster factor encountered at a lot of cons was nearly completely absent (I only heard of one incident with a member of the public trying to push his book idea on authors on fan day). Oh, and I got to have fellow Operative Karen McCoy as a housemate!

For me and Crow's Rest, going to UtopYA Con allowed me to peek into an entire other world of bloggers and fans that I haven't been tapping into. These authors (mostly indie- and self-published, and even trad pubbed authors like Rachel Harris) at UtopYA were doing everything right, and have a fan base that I wasn't even aware of. I hadn't ever heard of many of them before the Con, and yet they had fans traveling cross-country to squee over meeting them--and then those fans bought every single print book by that author to get it signed. I know of several people that left with close to 200 books they'd purchased at UtopYA.

And not only did the con offer good-quality workshops, panels, and talks, there were tons of opportunity for letting loose! On karaoke night, the theme was time travel, so I wore one of my steampunk outfits and got lots of compliments

Karen and I rented a condo with critique partner Alison Kemper, and we got out into the humidity for a walk and to see some of Nashville. We were located on the Cumberland river and my photographer side fell in love with all the rusted metal


And then on Saturday, there was a Fan Day and signing event, and Alison and I both had tables set up

On Sunday, one of the attendees, Eva Pohler, organized a tour of the Parthenon replica in Nashville's Centennial Park. 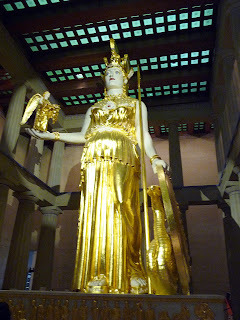 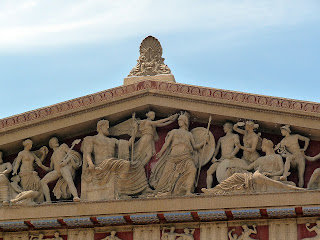 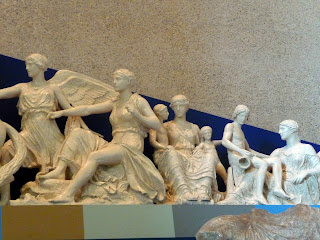 I know I'm not doing this con justice--there were just so many cool things that happened, large and small--oh, oh, we saw nuns playing basketball! 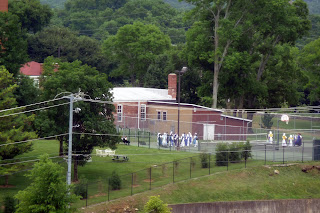 Actually, that unintenionally-rhyming brain detour captured it pretty well! I'm still on overload and trying to process all the things I learned and saw. I even got video of Karen's lip sync contest performance, but it didn't turn out well. The best footage is in another post by Michelle Kellogg if you'd like to see her in action.

I really hope to be able to swing the finances to attend again next year--will I see any of you there?
Posted by Angelica R. Jackson at 5:48 PM