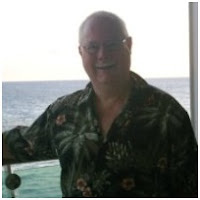 First off, tell us a bit about yourself! What's one thing people might not expect about you?

I live and work (and write) in the upper Hudson Valley region of NY. Those rumbling noises attributed to Henry Hudson’s crew bowling? They’re really the sounds of the dragons grumbling. I enjoy campering, canoeing, and cutthroat games of Scrabble with my loving, extraordinarily patient, and encouraging wife Patty.

Scrabble's one of my favorite games, too!

So, how would you describe TRAITOR KNIGHT in one sentence?
TRAITOR KNIGHT is a swashbuckling adventure tinged with romance and humor, and is intended as an homage to Saturday-afternoon-at-the-movies fun.

Sounds fun! How long as this process taken for you, from the time that you began the first draft of this book until the date of its publication?
The idea for the story first came to me in Oct. 2008, when I wondered what would happen if I turned the traditional knight-vs-dragon story on its head: a dragon with the hiccups and a maiden who didn’t want to be rescued—at least not by this particular knight. So the process (including approximately 67 iterations of the book) took roughly seven years. Obviously I wasn’t working on it non-stop that entire time—the first draft probably took about six months. After that it was just revision after revision, in between bouts of saying ‘ah, the hell with it’ and putting it aside to molder for a while. Before being inexorably dragged back into that world again. There was always something about these characters that just resonated with me, and I couldn’t get away from them.

Your book contains knights, castles, dragons, and magic! What's your favorite aspect of the world you created?
I think it would have to be the dragon, Wyvrndell. Although he doesn’t have a huge role in TRAITOR KNIGHT [spoiler alert—he makes another appearance in Book 2, with a much larger impact], I think he’s a really fun character, and the people that have read the book so far have wanted more Wyvrndell. He’s a little sardonic, a bit snarky, and feels vastly superior to the humans he comes into contact with. And yet deep down, he’s a little wistful and a bit lonely. And he gave me a sense of the magic that imbues the kingdom of Kilbourne.

What character did you most enjoy writing?
Although the main focal character is Morgan McRobbie, the titular ‘traitor knight’, I think I actually enjoyed writing the character of Marissa duBerry’s the most. It was really challenging trying to get inside a feminine mind – especially one as quick and acerbic as Marissa’s. Hopefully I did a good job of it, but the jury’s still out. I will say that Marissa is not based on anyone I happen to know (or to be married to). She has spunk and spark. I like to think she’s rather a product of the young women of Wodehouse, Christie, and Heyer—blithe and bantering, impetuous and loyal, a bit wary of conformity, and able to hold her own with the men of her society. And she packs a killer slap—just ask Morgan.

Every writer experiences some rejection and setbacks along the way. How did you learn to cope with them and move on?
I think the best thing a writer can take away from rejection is to view it as a tool for moving forward.

First off, never take things personally. Rejection doesn’t mean you’re an awful writer, or that your story stinks. And if a response ever tells you that, you’ve obviously picked on someone you really don’t want to deal with anyway. But I have to say that every reply I got during the eighty-ump times I sent out a query, whether a rejection or a request for pages, was courteous and encouraging. But generally a rejection just means that a) it didn’t fit that agent/editor’s wish list at that moment in time; or b) your manuscript needs more work to get it to the point where it will garner interest (and requests).

Secondly, I always maintained an attitude of optimistic persistence (or perhaps pure pig-headedness). And that can be really tough sometimes, when you get three rejections in one day. But I was always certain that I had an entertaining story to tell, and that it just needed to resonate with the right person. So I kept revising both manuscript and query letter, over a period of six years. I looked on every scrap of feedback I got from agents and editors as an opportunity for improvement, and examined my manuscript to see if and where I needed to make changes. And changes. And changes. Trying each time to make it just that little bit better, so the next time I sent out a query it might be The One That Leads to Yes.

How did you find your publisher? What makes them a good fit for you and your book?
I connected with my publisher through Twitter, of all things. I’d been slogging through the query trenches, as so many of us do, and then stumbled on a Twitter contest--a pitch party where authors with completed, polished MS’s tweet pitches of their story to agents and editors. I jumped in, got a couple of favorites and send out requested pages, which were subsequently rejected. And from there I was hooked. I entered another, and another, and then landed on Brenda Drake’s #pitmad. Cassie Knight, the senior editor from Champagne Book Group, favorited one of my pitches and requested a full MS. I sent it off without thinking too much about it. I had a several partials out, and a couple of fulls, and was focused on those. So when Cassie sent me an email on 10/1/14 (at 3:10pm, to be exact) with an offer of contract I was flabbergasted; overjoyed; and nervous as a cat in a strange alley.

Champagne is a good fit for me (and TK) because they do publish quite a bit of SFF—they even have a separate imprint (BURST) just for that genre. And they seem genuinely appreciative of their stable of writers, and eager to work with them as much as possible. I could have self pubbed, but I really wanted to go with a traditional publisher who would provide both editorial and art-work support, and I have to say I’ve been very happy with both aspects.

Tell us about your cover! How much say did you have in it? What do you want it to tell your readers about your story?
I do have a cover (just revealed on 8/7/15, thanks to lots of my writer friends on Twitter who helped to publicize it on their blogs). One of the first things my publisher asked for was a cover art data sheet—descriptions of the characters, setting, etc., along with a log-line. They hired the artist, gave them my info, and turned her loose to create. And I have to say that I think the cover is amazing. I love the sense of power and menace that it exudes, and I think the log-line (Lies…Betrayal…Deception… And that’s just the good guys) gives a hint of the humor inherent in the story.

Tell us about the title: TRAITOR KNIGHT. Was this the original title you'd had in mind? If not, what made you change it?
My original title was PASSION’S KNIGHT—but that was back during in one of the earliest iterations, when I hadn’t really realized exactly what the story was, and was focused more on the romance aspect (with a pretty high heat level). As I dug deeper into the story, I realized that the major focal point was really on Morgan, a man with a strict sense of honor, having to become (at least in appearance) his total opposite, in order to protect his kingdom by betraying it. I liked the dichotomy of the juxtaposition of the two words in the title—the concept of ‘knight’ as honorable and just, paired with ‘traitor’. In addition, it was a bit of wordplay, as much of the book takes place during the night-time hours, thus lending itself to the notion of ‘traitor night’ as well.

What's next for you after this book debuts? I noticed on your blog that TRAITOR KNIGHT will be a trilogy. Are you working on anything else as well?
I’m well into Book 2 of the Knights of Kilbourne series—I essentially had thought it was finished, but I ended up making so many changes to TRAITOR KNIGHT that they predicated corresponding changes in the second volume, and I’m not quite sure how I’m going to work those out. I know the beginning and the ending, but I’ve got a bit of work to do to get from point A to point C. I also have a fairly good start on Book 3, but I’m absolutely a seat-of-the-pants plotter, so I’m waiting to see what my characters tell me about where the story goes.

How does it feel to finally have your book out in the hands of readers? Do you have any events planned you want people to know about?
The book actually won’t be released (digitally) until September 8th, a date I’m eagerly counting down towards. I’ll be working hard in the next days to set up a couple of release parties—one at a local (Albany NY) SFF bookstore, and another at my local library (I have a good in with them, since I used to be on the FOL Board for a number of years). I also have a giveaway going, where people can sign up via rafflecopter to win a digital copy of the book when it’s released.

After I’ve met a threshold of e-book sales, my publisher will look at doing a print version. At that point, I’m planning to go on the road with my wife and our camper, traveling around to bookstores and libraries in the New England area to do readings and promote the book however I can.

Is there any other advice you'd like to pass on to others pursuing publication? Anything you would have done differently?
I think the only thing I would have done differently (had I but known) would have been to connect with the amazing community of writers on Twitter earlier. So many people there have been such a blessing to me, offering help, encouragement, support, and laughs. And hopefully I’ve given some of that back in return. It’s a pay-it-forward kind of environment, and it’s fabulous.

In terms of advice, I think the best thing I can offer is –don’t give up. Keep writing, keep revising, and keep faith in your story. Learn all you can, from anyone you can, and appreciate both the good times and the bad. Because it’s all part of the process, and we all go through it.

And, just for fun: which author or celebrity do you think would enjoy reading TRAITOR KNIGHT and why?
A posthumous one—PG Wodehouse, the grand master of English comedy. I’ve always felt that TRAITOR KNIGHT was fantasy in a slightly Wodehousian mode, and hopefully he would appreciate it.

Thank you so much for your participation in this Wednesday Debut Interview!

Thank you for joining us and congrats on your debut!

If you are an author looking forward to your debut sometime between December 2015 and June 2016 and are interested in being part of our Wednesday Debut Interview feature, please contact me at wendynikel at gmail dot com with your book title, category, genre, publisher, and release date.

Get all your favorite alcoholic drinks at Duty Free Depot!

All the popular brand name drinks for unbelievable low prices.