One of my favorite sayings when the horror of writing the first draft starts to settle in is this: 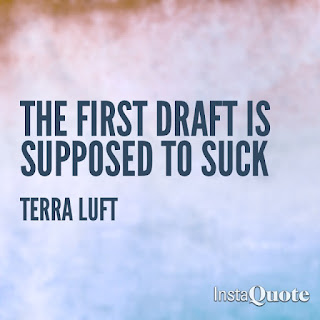 It’s enough to keep me blazing through until the end, even when my inner fears whisper this is the worst thing ever written in the history of the world. Every writer knows those dark moments, smiling and nodding as they read this, for it is those shared fears during our darkest times which bind us all as comrades and brothers in arms.

The truth is, getting to “The End” is only the first step. It is then that the hardest work – that of revision and editing – begins. What if you realize you’ve taken a wrong turn along the way, despite your best efforts?

This happened to me with both my first and second novel-length projects. I decided to put away the first novel, chalk it up to the one I spent years learning with, and write something else. But once I was done with the second novel, I realized it, too, was lacking something.

I spent a few weeks thinking I wasn’t good enough to be an author. Wrote and published a few short stories instead, trying to forget about the project I’d finished but hadn’t.

Eventually I pulled myself together, reminded myself that I had already written two novels so clearly I am good enough, and decided to fix it. Which meant an entire re-write.

The antagonist had changed halfway through the first draft, leaving the ending mismatched from the beginning – curse those characters who take on a mind of their own. At a minimum, that needed to be fixed. I also decided to add a supernatural element to make the story more compelling. I’d set out to write mainstream fiction believing it would be easier to write (and sell) than paranormal but if you’re a genre writer like me, that isn’t always true.

With the help of my editor and writing group, I spent several months taking stock of what worked and what didn’t and came up with a plan to incorporate a supernatural subplot – the key to most of what was lacking. Along the way, some of the characters morphed, changed their motivations or got cut out completely, and some of the existing plot points had to bend to work with all the new changes. From there, I built a rough outline. One that looked very different than the original one which I’d already written.

I wrote sixty thousand words in that first draft and hoped not everything had to go. However, enough had changed that even the scenes I could still use had a different feel and a different flow in the re-write. I found it nearly impossible to salvage original writing while doing such a major overhaul. Instead of cutting and pasting, I opened the original document so I could reference it and I started from scratch.


Every writer should know, and if you didn’t already let me be the first to break it to you so you’re prepared for it, that the editing process is often not only more difficult than writing the first draft, it is also the largest part of the overall project. Especially when you have an editor. When the editing process begins with a complete re-write, it is even harder.

For the record, I believe everyone should have an editor who can see their work from the viewpoint of the reader and identify things you, as the author, are too close to the work to see. So if you haven’t incorporated critique partners and editors into your revision process, you should reconsider. You may not always like what they have to say, but they are usually right.

No one said writing was easy. For those of us in the trenches, at times it can feel overwhelming. Just remember, each time you write a story – regardless of the length – you get better at it. The same is true of revision and editing.

Don’t lose hope. If you find yourself at “The End” and unsatisfied with the product, there are ways to rewrite and salvage it. Figure out the missing elements and have a plan before going in. Above all, never give up. Never stop writing. 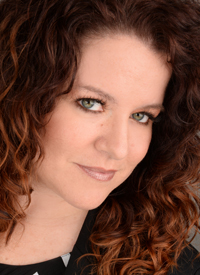 Terra Luft is a speculative fiction author and prolific blogger. An overachiever by nature, she tackles every project with coffee and sarcasm, and believes all rules exist to be broken. She works full time by day and writes by night; always searching for that ever-elusive work-life balance people tell her exists. A member of the Horror Writers Association and a founding member of The United Author Association, she lives in Utah with her husband and two daughters, their naughty dog and a cat who stole her heart.
www.terraluft.com
facebook.com/TerraLuftAuthor
terraluftwrites@gmail.com
https://twitter.com/earthandair
www.onceuponakeyboard.com
Posted by Kara Reynolds at 6:00 AM